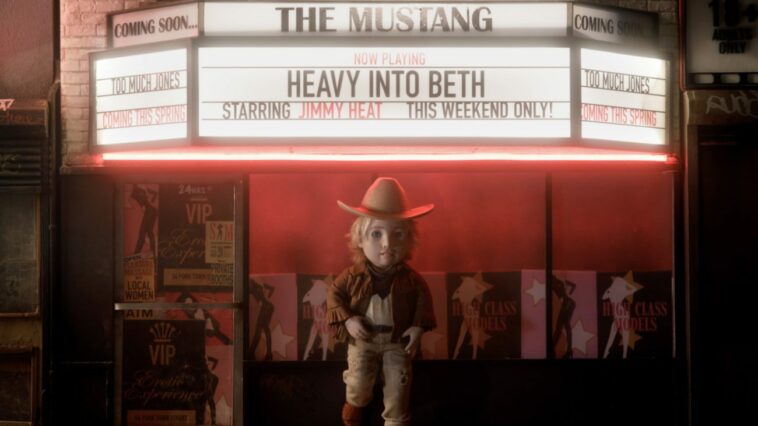 To suggest that Ultra City Smiths is structured around this question may bring to mind the murder of Laura Palmer, and while it is hardly the only show to formulate itself around such an inaugural mystery, I find myself thinking that Ultra City Smiths actually bears further resemblance to Twin Peaks. For one thing, the town (or city) is practically a character in the show. For another, this city is populated by a diverse set of characters, all of whom manage to feel fleshed out in quick order, with their particular quirks. And, of course, virtually all of them are suspects. Then we have our detective, coming in as an outsider to investigate. Where Dale Cooper loved his coffee, David Mills (Jimmi Simpson) has a thing for limes…OK, that’s not quite the same.

Regardless, I intend to take the murder mystery in Ultra City Smiths seriously. Here is what we know so far: Carpenter K. Smith (Kurtwood Smith) went out to buy cigarettes (and did buy cigarettes) even though he didn’t smoke; the Smiths assembled by Mills at the end of S1E2 (many of whom go by other names at this point, one way or another) all had contact with Carpenter in the hours before his death; he seems to have been killed by a gun dangling from a thread on a red balloon, as seen at the end of S1E1, though it is of course not at all clear how the trigger could have been pulled in this situation; and S1E3 (“Hot Clues”) features a scene wherein Mayor Kevin De Maximum (Tim Heidecker) and Captain Krieger (Terry O’Quinn) make it very much sound as though they were behind the murder.

Of course, it would be no surprise if the mayor had his political rival killed, particularly when just about everyone seems to refer to Carpenter K. Smith as the city’s last bright hope for a better tomorrow, while De Maximum’s campaign billboard features him giving Ultra City a middle finger. But for this very reason, it almost seems like too simple of a possibility to be the ultimate answer. Perhaps, though, it is right there staring us in the face already here in Episode 3, as the corrupt city officials hang out with known criminal Rodrigo Smalls (Luis Guzmán), enjoying the entertainment provided by surrounding strippers.

Perhaps they paid Rodrigo to somehow kill Carpenter K. Smith with a gun on a balloon…somehow, and we’re now seeing them conspire to cover it up. Or, well, we do see them conspire in the direction of impeding the investigation in S1E3; the only question is if they could possibly be doing this for reasons that don’t imply their involvement in the crime.

What’s clearer is that while Mills and his new partner Nico Onasis (Chris Conrad) might discover “hot clues” in Episode 3, this may only literally refer to the fact that the metal casings were out in the sun. The fact that the bullet that hit Tim Snodgrass (Jason Mantzoukas) came from the same gun as the one used on Carpenter K. Smith is (seemingly) completely coincidental. Little Grace (Alia Shawkat) just happened to be in the park when the balloon descended and she took the gun.

We are, however, starting to see more of an intersection between the story threads of Ultra City Smiths. Grace was led to confront those who stole from her with the gun because of the pressure being put on her by Rodrigo, which has led Andrea the Giant (Bebe Neuwirth) to engage in some questionable and dangerous underground wrestling to try to earn the money to help her daughter. Tim Snodgrass broke the story that the police station baby’s mother was Trish McSapphire (Debra Winger), who of course is Andrea’s sister (and they’ve made plans to get pancakes and coffee). We also see Grace talking with Gail’s son Trevor (Caleb McLaughlin) and Gail (Da’Vine Joy Randolph) with Space Bitch, who “defeated” Andrea when she was forced to take a dive in Episode 1.

A couple of narrative threads still seem largely to be dangling on their own, however (which isn’t necessarily a bad thing, by any means).

Street Hustler Boy (Damon Herriman) is prominently featured in S1E3, and that’s fine by me insofar as he might be my favorite character. There is something truly poignant in his story and his song about being ready for a second chance—there is a lot of humor there, but if this is dark comedy, it’s a darkness tinged with sadness.

34th Street Chuck (Jim Becker) is sick, and Street Hustler Boy laments his career choice, as he’s now an aging male prostitute who can’t manage to sell a back scratch. He tried to make it as an actor but failed because he couldn’t read. He catches rainwater in a cup and calls it rain soup. He again has no pants.

Thus we see the narrator (Tom Waits) enter the story in “Hot Clues” as he waxes on about the influence of suits once again before he gives Street Hustler Boy old newspapers to make himself newspaper pants for his visit to the doctor. It’s not as good as a suit—doctors apparently give better care to people who make the effort to wear a suit—but it’s better than going in his undies. You’d think the rain would be an issue with this plan, but S1E3 doesn’t really explore that.

Regardless, our friend manages to get a real suit by the end of the day, as The Most Dangerous Man in the World (Julian Barratt) discards the too-large clothing he was given on his freedom day and it falls into Street Hustler Boy’s lap. This purportedly most dangerous man remains an enigmatic presence in Ultra City Smiths, as the narrator makes reference to the power he held in the past and wonders if it is a coincidence that he’s returning to Ultra City now, when it’s last bright hope has just been killed. We’ll have to wait and see how he factors into this story.

It seems clear that all of the various threads of Ultra City Smiths will come together over the back half of the season, and I somehow have confidence that Mills and Onasis will figure things out. The latter may have been chosen because he was the most distracted detective on the force, but that seems to have been put in the past now that he has decided to get married because he needs a spotter (though he hasn’t met his future spouse yet), and the former may have a lime struggle that scotch makes worse (because when he gets drunk all he can do is focus on limes, and his wife doesn’t like that), but each also shows signs of being something of a savant when it comes to detective work. They may seem off-base at the end of S1E3, but I have a weird faith that somehow these hot clues they found shining in the sun will actually lead them to crack the case.

Ultra City Smiths isn’t quite about that, though. It’s about the characters and the city itself. It’s a tale of grime and desperation, with a faint light of hope glimmering through even when things seem hopeless. In other words, it embraces the absurd, and not just because the characters are animated dolls.