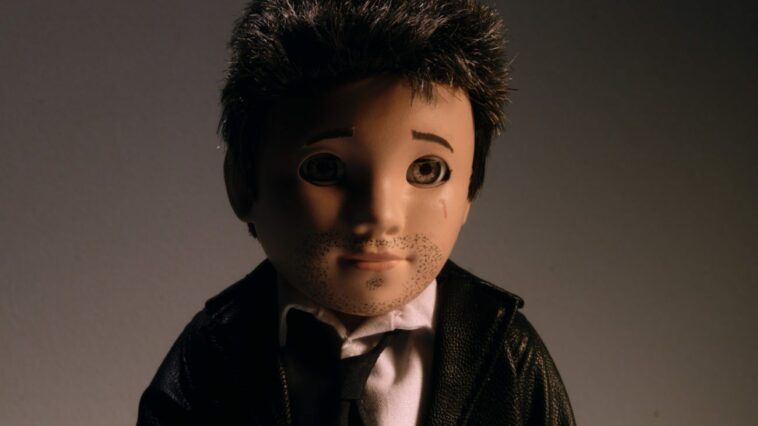 The following contains spoilers for the Season 1 finale of Ultra City Smiths: S1E6, “Family of Orphans”

For some reason, even after “O-o-h Child” last week failed to advance major plotlines, I had continued to think that Ultra City Smiths would wrap up its central mysteries in the season finale. This was not the case, however, as S1E6, “Family of Orphans” instead broadens the story of the show by introducing new threads.

Most notably there is whatever the deal is with the mayor’s Tween Appreciation Day, which provides Kevin De Maximum with some great moments (and a song), fleshing out this character and making us wonder exactly what his plans are. He wants tweens to become teens to become adults to give him an army of adults…to do what? And why especially Trevor? We see that he and The Most Dangerous Man in the World are definitely working together now, but were they before the latter went to prison? What does all of this have to do with the killing of Carpenter K. Smith?

Of course, he was going to make Ultra City a gentler place, as we’re reminded again in S1E6, so perhaps it’s simply that these men certainly don’t want that and this binds them together.

Donella’s mayoral run has been lampooned, so she tries to recruit Sissy to the cause, but that’s not going to work because of her past. Thus it falls to Donovan, who apparently is not familiar with films that are not pornography. (I’m not sure if it’s really said, but I think that was supposed to be Rocky they were watching, as he wondered when the two men boxing were going to do it.)

Andrea tells Trish about her romance with The Most Dangerous Man in the World, and Little Grace arrives to see him towards the end of S1E6. Certainly Rodrigo (who again bemoans uncertainty as to whether he could hurt the child) doesn’t know about this familial relationship. But does Grace know about the connection between her father and Rodrigo? If so, this seems like it could be a pretty good way to get Grace out of the trouble she’s been in since Episode 1, when the young thugs stole the bag of money from her…which we learn here in the season finale they used to make friendship bracelets for the mayor, though we still don’t know why, just that there is a prominently featured one with Trevor’s name on it.

These plot threads are delightfully bizarre, and it’s nice to see things coming together, though it looks like we’ll have to wait for further seasons of Ultra City Smiths to find out the answers to the show’s central mysteries.

One question that is answered definitively in S1E6 pertains to the identity of the police station baby—it’s Mills. Further, it turns out that our narrator is also a PI who has been investigating the case for 30 years. He finally got a fingerprint match and gives the info to Trish, whom Mills arrives to arrest at the end of S1E6.

He doesn’t have very good grounds to arrest her, just Tim Snodgrass saying her name, basically, which I suppose goes to show how corrupt Ultra City is in another way if you think about it. Mills may be on the right side of things for the most part, but he is going overboard jumping to this arrest. Perhaps this should be blamed on his limes. Regardless, it will be interesting to see how this plays out given that Trish has just learned Mills is her son. Will she tell him?

Coming into the season finale, the plot I was most invested in was that of Street Hustler Boy et al.’s bank robbery, and S1E6 rewarded that by placing this story at the center of the episode, even if it didn’t come to a resolution. What’s more important is how it feeds into an emerging theme about the connections between the characters in Ultra City Smiths.

Of course it’s right there in the title, but I was nonetheless struck by how many times in “Family of Orphans” one character referenced that another was a sibling. These people didn’t really know each other at the beginning of the season for the most part, and yet they feel bound to one another now.

They may not all be orphans, depending on how we want to define the term and how nitpicky we want to be, but many of them are in a straightforward way, from Mills of course to Andrea the Giant, who tells the story of how no one would adopt her when she was a child. And perhaps they are all orphans now that Carpenter is dead, though I’m not sure about their mothers.

Regardless, the importance is a thematic one—these are people fundamentally alone in the darkness of Ultra City, but who’ve come to find each other. The question now is whether they can and will be there for each other, as embodied by Gail listening to her voice messages. We can’t help but feel she’s somehow failing all of those around her, but not through any wrongdoing on her part. It’s more like she’s a center that cannot hold.

Indeed, things are looking rather bleak as Season 1 of Ultra City Smiths comes to a close. Whatever the mayor’s plans are with the tweens, we know he and The Most Dangerous Man in the World have sent someone to kill Mills, and whoever this person is has already killed Nico, along with all of the parole board members over the years who voted to keep The Most Dangerous Man in the World in prison.

Street Hustler Boy and crew are trapped in the bank, surrounded by cops prepared to storm the building. I don’t know if they’ll rush in and kill everyone—Gail might be able to stop that from happening, at least—but there’s still the likelihood that one of those river guns is the one that shot Carpenter K. Smith and Tim Snodgrass. I’d guess it’s the one in Street Hustler Boy’s hand, if I were to wager.

So Season 2 of Ultra City Smiths (should it come) promises to be even darker than Season 1. But the characters are certainly there to keep this story going for multiple seasons, whether or not the mystery of Carpenter’s death is resolved.

Let’s hope we get to see what happens next.