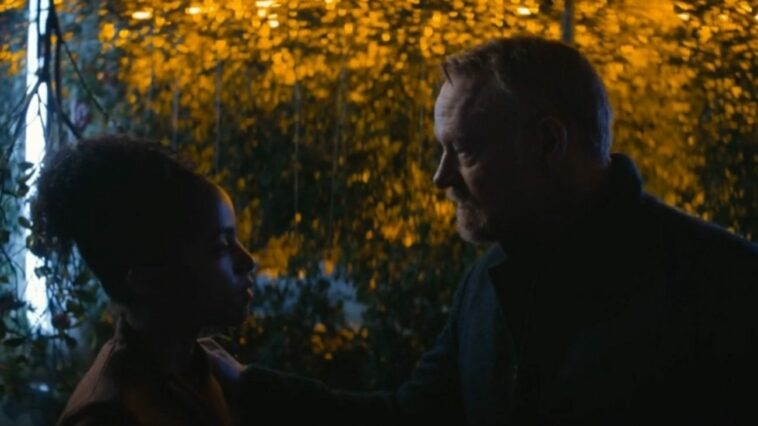 The following contains spoilers for the premiere of Foundation on Apple TV+ (S1E1, “The Emperor’s Peace” and S1E2, “Preparing to Live”), and also references the Foundation series novels.

Welcome, dear reader, as we begin to review the Apple TV+ series Foundation with the two-eipsode premiere, featuring Episode 1, “The Emperor’s Peace” and Episode 2, “Preparing to Live.” Foundation is a project that has been a long time coming. The original trilogy of novels was written by Isaac Asimov in the 1940-50s, with four additional novels produced in the 1980-90s. As a whole, it is considered one of the all-time great sci-fi/fantasy series, up there with Dune and Lord of the Rings. Serious attempts adapt the series to the big screen date back to at least 1998, and to 2014 for the small screen.

That said, the novels, especially that original trilogy, are a bit heavy on big ideas and dialogue, and light on action and suspense. In fact, one of the key narrative elements of the stories is that generally the conflict is already resolved before anyone can even lift a finger. So watching some of the trailers and teasers that came out leading up to the premiere, I have to admit I was a little concerned that they had gone overboard trying to liven up the source material with chase scenes and explosions. These two episodes have allayed that fear though. So far, I think they’ve really struck a nice balance here between the cerebral and the physical.

As stated in the warning banner, we will be discussing all of the Foundation novels, occasionally comparing this adaptation to the original story, and also looking ahead to events and characters to come. I’ll try to not get too spoilery, and given the amount of changes we’ve seen so far, basing anything off the original content may be misguided anyway. With two episodes already under our belts, there’s a lot to talk about. So let’s get to it.

One of the most amazing things about the premiere is how prescient this 70-year old story is for the times we are living in today. An empire in decline. Science under attack. Homogeny and tradition at odds with diversity and change. Fear versus hope. Foundation comes to us in the same month where we just commemorated the 20-year anniversary of the Twin Towers falling. Set 20,000 years into the future, we scale up to terrorists toppling a space needle reaching out to geostationary orbit. The reaction, a “show of strength” to allay the people’s sense of fear, is utterly predictable.

Gaal Dornick is facing another rather familiar sounding scenario on her home world of Synnax. Facing a climate crisis of rising sea levels, the warning scientists and mathematicians have been labeled heretics and killed in the Seer church’s “Purge” (or “Cleanse,” in their twisted terminology). Hari Seldon’s invitation allows Gaal to flee just barely one step ahead of her own execution, as people whisper and stare on her way to be picked up and whisked away.

Once she arrives, she finds out that she has leapt out of the frying pan and into the fire, as the Galactic Empire has been watching her for some time now, and only allowed her to come to Trantor in order to become a pawn in their efforts to contain Hari Seldon’s mass following. Hari bets on Gaal and she proves her worth when she holds true to the math and declares his calculations to be correct in court. The Empire is dying.

Not only is the Galactic Empire being ruled exclusively by old white guys, it is being ruled by one white guy exclusively. Seldon informs the three “brothers” that they could stave off the darkness a few more centuries if they end imperial cloning. There is value in difference and the new. After all, Cleon XII (Brother Day) is not just the Emperor, he is literally referred to as “Empire.” His stagnation is the Empire’s stagnation.

Brother Dusk is most affected by Hari’s suggestion. Like the Empire, he too is in decline—and he has regrets. His eyes are opening to the hubris of their progenitor. Thinking about their dynastic legacy, if what Hari says is true, the weight of the 100 million dead from the Space Bridge attack lies on his shoulders. He attempts a minor bit of atonement by taking over cleaning the mural from the master geneticist that his younger self had killed, and frustratingly fails at it. He meets directly with the Anacreon and Thespis ambassadors, but ultimately confesses that they will die because, as Demerzel tells his youngest self, Brother Dawn, they “always choose this.”

In Episode 2, the exiles of the Foundation have embarked on the journey to Terminus. The 5,000 members of the Foundation are using the four year plus trip to prepare both for the establishment of their colony and the work ahead for the Encyclopedia Galactica project. For Hari and Gaal, there are also preparations being made to live and to die.

In just a few short months, Gaal and Raych have gone from Gaal declaring him “cute” while seeking Raych out in the Space Bridge terminal, to going at it like rabbits in every isolated corner of the ship. They’re even having a baby together, and the “birth plan” is to have the embryo removed and stored in the ship’s seed bank, where it will be safe until planet fall. Once on Terminus however, nothing is assured, as simulations and estimates are still showing that over a third of the population will die.

While Gaal is uncomfortable speaking as “The Foundation” rather than as just herself, Hari is having the opposite problem. People are becoming too familiar, he is no longer “Dr. Seldon.” For him, these last few months have been an unexpected gift. While he planned for Empire to exile the Foundation to Terminus, he was also convinced that he would be executed in the process. Gaal changed that. Now he needs to fade into the legend that he was originally intended to be, in order to keep the plan on track.

So Hari plans his own assassination. At least, that’s my interpretation of events. He wants to wear his favorite shirt, despite the ink stain. While collecting it from the laundry, he indulges himself for a moment to say thanks to all of the people working there. He nudges Gaal to start taking over some of his administrative tasks. He and Raych stage a very public argument at dinner. And then finally, he has Raych, his adopted son, stab him in the heart.

That much all seems to make sense (after a few rewatches, admittedly). However, once again, Gaal throws a monkey wrench into Hari’s plan, this time by showing up just as the tragedy plays out. Raych hurriedly rushes her out of the room, races down several hallways, and shoves her into a life pod along with the murder weapon. Why did he do this? What could it mean? As cliffhanger episode endings go, this one blew me away. I did not expect that from this show.

Best lines of Episodes 1 and 2: