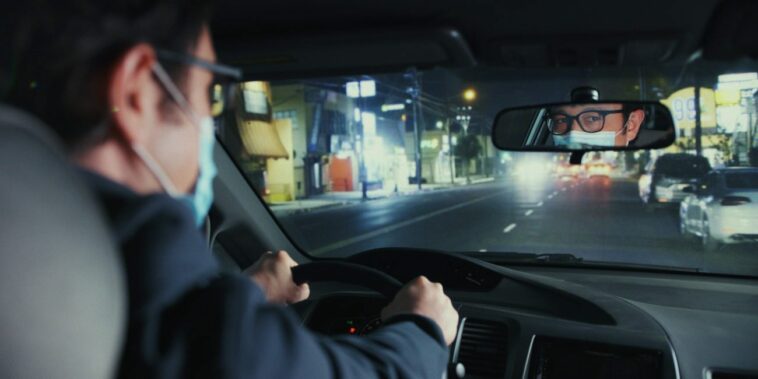 Since “Don’t Panic,” Mr. Corman has given us two recurring symbols of Josh’s anxiety: a flaming meteor in the sky and an ominously tolling bell on the soundtrack. Both of these I have found effective from the beginning, but with the events of S1E9 (“Mr. Corman”)—and its closing second in particular—it seems time to properly ponder what the meteor represents.

It’s the end of the world, sure, but it’s clear now that there is also a direct relation for Josh to his father. Artie (Hugo Weaving) has been variously mentioned throughout the course of Mr. Corman, and never in a positive light. In fact, in “Many Worlds” one of the realities featured Josh and Beth trying to convince Ruth to divorce him. In our reality, she left him long ago, and it’s not hard to see why.

It’s not that he’s a bad guy or unlikeable. In fact, he’s quite charming—that’s part of the problem. Artie is the kind of guy that you want to believe and want to root for. He’s a bit broken, but he knows it, and it’s tempting to think he could be helped or should be forgiven. Which, of course, you could do, but it’s probably the case that he took out a credit card in Josh’s name and is lying about it now, and it’s almost certainly the case that he was lying about the whole heart attack thing as a way to manipulate his son into seeing him for the first time in a couple of years.

He thinks he can charm his way to forgiveness, and it’s probably worked for him a lot over the course of his life, but there are reasons Josh has basically cut him out of his own and they don’t just relate back to his childhood. There is a chaos about Artie, and it’s no surprise that the ominous bell of anxiety tolls when Josh sees him calling towards the beginning of S1E9, or that he wants to ignore him.

“Mr. Corman” centers on a prolonged interaction between father and son, with nearly the whole episode taken up by their dialogue, and yet we still only get glimpses of what’s happened in their past and are led to infer much more than we are told. For example, Josh chastises Artie for not remembering that he’s been sober since he was 13, which of course implies a time before that when he was not sober.

Artie mentions when he snuck Josh out of the house in order to watch him play the Troubadour, calling it the best moment of his life. Josh says he doesn’t remember, or he might remember—and of course we don’t know if he remembers or not. Maybe he is just insisting to his father that he doesn’t in order to deny him this attempt at bonding over it in retrospect. Or maybe Josh got too drunk.

The penultimate scene of S1E9 is a flashback, and at first I thought it was to this night that Artie had gone on about at length, showing that Josh did in fact remember what occurred. Instead, it was a flashback to a night when Mr. Corman rustled his son out of bed. He takes young Josh and Beth out to the yard, raving about a meteor. It’s coming to kill them—to end the world—but that’s OK. It’ll be alright. They need to see it happen.

Of course, the world did not end that night, at least not in the sense Artie was talking about. But in a personal sense for Josh, perhaps it did. Here was this man whom he trusted—his father—breaking his sense of security in the world. And after all, the world isn’t just the totality of objects in space and time; it’s the narrative that holds them together. The world is about how things make sense.

Thus the meteor is both general and specific as a symbol in Mr. Corman. What does it signify when S1E9 ends with it crashing to Earth and hitting Josh from behind? Had Josh forgotten that night? Is this the return of the repressed?

Given that Mr. Corman has played with fantastical imagery throughout its story, I don’t think there is any chance that a meteor actually came from the sky to hit the streets of LA in this moment. Rather it seems clear that it represents something internal to Josh’s psyche.

We again get the blurring of the camera lens in the frames presaging the flashback, leading me to now interpret all of those previous instances as related to this primordial repression on Josh’s part—cracks in the surface.

Has this all been about his father? If we were to follow Freud, the Father is not my father but the figure of authority stitching the symbolic order together—the authority that makes the world make sense. This is the Father one has to “kill” or sublate—a determinate negation—but it is a great peril to instead have the Father betray you.

Artie calls out Josh for blaming all of his problems on someone else—on him. It feels good, doesn’t it? Sort of like a drug…

Perhaps this is what breaks down as S1E9 draws to a close. Artie says he blames himself for all of those missed opportunities and problems in his life, but for Josh to blame himself would be to threaten the narrative of the world he’s built for himself—one where his problems stem from his dad’s behavior.

Josh’s father is also a symbol even if it is a symbol of the Father, which is a symbol too. It would be what makes everything make sense—makes everything happen for a reason—but at the level of the Real there is nothing like that. To accept this is to kill the proverbial Father, and it isn’t easy. Instead, we tend to repress that lack of meaning, or foreclose it from consciousness, lest it appear like a flaming meteor in the sky to threaten the narrative we’re trying to live in.

Or come crashing down, behind our backs, on the streets of LA in the middle of the night.

I thought Mr. Corman took a big risk entering the time of COVID-19 last week in “Hope You Feel Better” insofar as it now has to grapple with that reality as opposed to operating under its own logic in a fictional space apart from it. Overall, I suppose I would say the show has handled the situation well enough, but it’s an odd criticism that I have to feel as though Josh wouldn’t be doing nearly as well as he seems to be doing by the time of S1E9.

It’s odd because of course I have no right to claim that a fictional character would be struggling to get out of bed like I was in 2020, and generally struggling to do anything at all like I was…that he’d be simply crippled by the weight of all of the anxiety this pandemic brought down on him. I think that’s true, for the record, from what we’ve seen of Josh heretofore, but it wouldn’t exactly be good TV. I don’t want to watch that.

S1E9 does recognize the ongoing pandemic in moments, as Josh wears a mask and doesn’t want to go into a McDonald’s and so on. Perhaps this is enough. It works. But I can’t help but worry that the very existence of the pandemic in the narrative of Mr. Corman risks undermining what the series wants to do.

Of course, it has undermined much in real life, but there would be an almost sad kind of irony if at the end of the day this attempt to shoehorn reality into the story of Mr. Corman were to undermine its realism. And I felt that was almost the case as I found a part of myself internally kvetching at the idea that Josh didn’t have a mask on throughout much of the primary exchange of “Mr. Corman” or that the fact that his father wasn’t wearing a mask wasn’t an even bigger deal to him and a point of greater fractiousness running through their interaction.

But if it had been, that might have felt cheap, and ultimately the emotional reality of the fiction of S1E9 carries it past any of these thoughts that crept into my mind as I watched it. Hugo Weaving is as compelling as ever as Artie, and Joseph Gordon-Levitt’s face tells its own story as his father sings…a story that would have just been covered over if he’d been wearing a mask.

So perhaps it is best if it feels a bit like S1E8 was the Pandemic Episode and Mr. Corman moves on. But that would leave COVID a bit like a flaming meteor in the sky you try to pretend isn’t there, which might any day come crashing down to wreck everything.