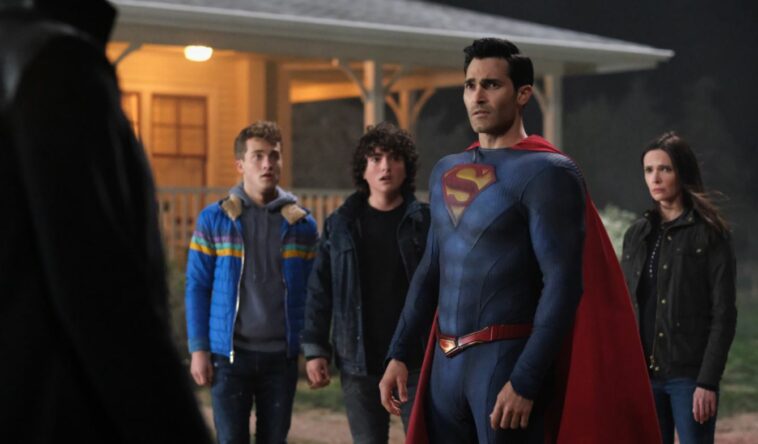 This week, Warner Bros. is releasing the first season of the CW’s Superman & Lois show on Blu-ray and DVD. The 15-episode season starring Tyler Hoechlin and Elizabeth Tulloch ran successfully from February to August this year. Advancing several years into the future from their prior debuts on Supergirl, the venerable comic book couple was presented with a dynamic never before explored in previous movie and television incarnations: PARENTHOOD. Bolstered by exponentially raised production values from the usual Arrowverse shows, Superman & Lois worked dramatically to save their large and little slices of the world while they raised two teenage sons.

The established setting for this first season comes from wearisome domestic challenges and life-changing circumstances for Clark Kent (Hoechlin), Lois Lane (Tulloch), and their twin sons Jonathan (Jordan Elsass from Little Fires Everywhere) and Jordan (New Amsterdam’s Alex Garfin). The dying business of corporately-run journalism has downsized Clark out of a job and caused the highly-principled Lois to quit right after him when The Daily Planet is bought by corrupt industrialist Morgan Edge (Adam Rayner of FX’s Tyrant. Martha Kent (Michelle Scarbelli), the beloved mother figure to all in Clark’s hometown hamlet of Smallville, has died leaving the old Kent homestead empty. All of that is before you even get to capes and superpowers.

Clark remains the vigilant Superman, often partnering with his father-in-law General Sam Lane (Nip/Tuck’s Dylan Walsh) to investigate larger national and global problems several steps above muggings and saving cats from trees. An unidentified armored harbinger (All-American’s Wole Parks), dubbed initially The Stranger, is wreaking havoc and calling for the Man of Steel to answer for his cataclysmic crimes from another timeline. Meanwhile, Morgan Edge has targeted a Smallville on an economic downturn as a public benefactor bringing jobs back to town while secretly poaching X-Kryptonite from the area’s closed mining operations. That incarnation of the interstellar mineral can grant Kryptonian-level powers to humans through nefarious medical experiments.

Pivoting to make their lives quieter and simpler away from the disillusioning bustle of Metropolis, the Kents leave the big city to take over the family farm. The small town that welcomes them, including Clark’s now-married first love Lana Lang-Cushing (Emmanuelle Chriquí of Entourage) and her fire chief husband Kyle (Graceland’s Erik Valdez), is finding themselves desperate enough to accept Morgan Edge’s initiatives. Ever the diligent reporter, Lois Lane smells a ruse and is determined to expose Edge’s true dealings.

For the boys, this transition is a conflicting rug pull. The popular and extroverted Jonathan was feeling set as the starting quarterback of the football team with a steady girlfriend. The more troubled Jordan gets a new start to escape bullying and anxiety. Things get more unpredictable for them and their heroic parents when one of the sons starts to develop the unchecked beginnings of Clark’s powers, especially given the scenario where neither child knows their father’s second identity… until now.

I’m going to come out and say this with all the hyperbole in the world. Tyler Hoechlin is the best portrayal of this title character since Christopher Reeve. This Superman hugs more than he punches. He actually emotes compared to a certain wooden and ripped Englishman who looks the part from the chin down and never deeper. The former Teen Wolf heartthrob combines stoic and affable effortlessly while still bringing the buff-and-blue-eyed package to fill the prerequisite tights and throw down if necessary. For the place in life this character is presented, he’s perfect.

Bitsie Tulloch is no slouch either and fully handles her co-lead status. Compared to the likes of Margot Kidder, Teri Hatcher, and Erica Durance, there’s not a ditzy bone in her body or an exasperatingly unlucky flaw to end up as a damsel in distress. Her Lois Lane grabs that motherly will and flexes it with proverbial muscles greater than her husband’s. She’s the rock and the show grants her that matchless strength.

Representing the youth, yes, Jordan Elsass and Alex Garland are terribly unconvincing as high school freshmen, as is Lana’s daughter Sarah played by Inde Navarrette (13 Reasons Why). However their interactions with each other as brothers and a close family friend is what glosses over the age issue. Though very different with their traits and interests, Jonathan and Jordan are locked together as each other’s greatest supporter, which stands as a very compassionate example and dose of gumption in an era of the whiny Millennial.

On supporting side, the stage-trained Adam Rayner pushes his villainous role with a sly menace built on confident composure more than screwloose madness. The more he emerges, the more indomitable he feels without amped up physicality. Erik Valdez can grate a little with the cocky redneck tough guy act, but that’s the required foil when you have Tyler’s true blue across the way. Nearly saintly, Emmanuelle Chriquí’s is a helpful second female presence that balances Valdez. Wole Parks and Dylan Walsh both enjoy quite dramatic character shifts as the season progresses, turning each man into a welcome presence of additional heaviness. After that, things get pretty one-note and stock for side characters, but that’s the limits of CW television.

Rather than behave the way Smallville and Lois & Clark did for the majority of their TV runs, several advancements are made to make something richer for Superman & Lois. First and foremost, the “will they or won’t they” romantic energy that so often fueled and hung over most of the other takes of Clark Kent and Lois Lane is non-existent. The betrothal is sealed and long done. These two are a strong and established married couple who share the very regular teamwork challenges of parenting teenagers and juggling their multiple personal and professional responsibilities. There is no superpower or witty editorial writing that can counsel teens or make time for a date night.

Secondly, showrunners Todd Helbing (Spartacus) and Arrowverse czar Greg Berlanti crafted not only that central family dynamic of setting things predominately in Smallville away from places to make tall leaps in single bounds, but also a long-term arc that avoids the episodic “freak of the week” tendencies of Smallville and newspaper comings-and-goings from Lois & Clark. Through Morgan Edge’s growing power and the revelations coming from the armored Stranger, this first season of Superman & Lois builds a substantial rise of more ominous threats than a parade of bad guys to bash. Also, there are no crossovers (yet) to hype or shill for the other CW shows. Only one previous Arrowverse guest appears and it isn’t Melissa Benoist’s Supergirl like you would expect. All the while, the transitional maturation of Jonathan and Jordan that must be guided by his two parents is the bigger picture and the most important theme of the show.

Where most series stretch too long to squeak by and try to make up for sluggishness to end with a two-episode bang, Superman & Lois does not overextend its narrative and finds a sweet spot of 15 episodes compared to the 20-plus of other shows. Very little feels like filler and surprises are planted everywhere. In particular, the season’s ending showdown and climax spans a beefy five episodes. If one were to stitch just those five together, you would get a three-and-a-half hour epic feature movie as complete and fulfilling as anything the DCEU has tried with ten-times the budget and half the soul.

Launched by a dynamite pilot and second episode directed by Lee Toland Krieger of Celeste and Jesse Forever and The Age of Adaline, the idyllic and grounded tone of this series is marvelous. Its weighty, patient, and emotive vibe is wholly different from the rest of the Arrowverse. This is special treatment given to the parent company’s greatest flagship character and it is justly deserved. If the other CW shows have felt redundant, cheap, or flimsy to you, Superman & Lois will open your eyes, grab your heartstrings, and still dazzle your valiant action cravings.

Too true to the recent trend of many Warner Bros. releases, the disc edition of Season 1 of Superman & Lois (released on October 19, 2021) isn’t thick or flashy. You’ll find no expansive commentaries and not even any actual “making of” footage from the British Columbia sets inside the $25 price tag. The special features are limited to four promotional items spread across its three Blu-ray discs that drummed up interest in the series before its release.

The largest featurette is the “A Legacy of Hope” TV special. This 45-minute long program followed the February premiere as a companion piece to introduce this new take on the characters. Featuring the eager cast, proud showrunners, and a few choice outside guests like DC studs Geoff Johns and Jim Lee from the comic company side, “A Legacy of Hope” really sold the “epitome of a hero” goal they wanted to craft from this new series. The special does a very kind and decent job at pushing the internal and external inspirational power of its big hero.

After that, the next best bit is the virtual DC FanDome panel discussion featuring Tyler, Elizabeth, and Todd Helbing interviewed by Jim Lee for the company’s winter fan convention held a few months before the series debut. Lee, a combined expert and unabashed fan of the character, asked very good questions to the trio about what makes their portrayals different from past ones. Both stars surprisingly avoided watching old shows and embraced the mature direction Helbing scaffolded. Recorded Zoom on Blu-ray isn’t very attractive on a home big screen, but the conversation value is there.

Lastly, there is a CW promo called “Never Alone: Heroes and Allies” and a quick dive called “Alien Spirit.” The latter is a quick docu-lite dive with writers and producers like Helbing, Kristi Korzec, and Katie Aldrin and cast talking about the modern slant of truth, justice, and tolerance they were going for with Superman and his screen family. The former is a small featurette celebrating the sidekicks and supporting family characters that are attached to the many heroes of the Arrowverse and Titanverse. With Tulloch being on the newest show, she is in there very little compared to the more established entries like The Flash and Arrow.

Behind the plain menus and weak disc art, the best aspect of the discs are that all 15 episodes were juiced to their “extended editions.” Padded with a few extra minutes of previously shortened scenes and takes, these longer versions of the episodes ran exclusively the day after live broadcast on the CW website and streaming app. The extra substance is very much appreciated and gives disc buyers the fullest form of Superman & Lois they’re going to get. The series has been renewed for a second season that should arrive in early 2022.

DON SHANAHAN is a Chicago-based Rotten Tomatoes-approved and Banana Meter-approved film critic writing here on 25YL Media and his own website Every Movie Has a Lesson. He also contributes as a Content Supervisor and Assistant Editor in the film department of 25YL. Don is also one of the hosts of the 25YL-backed Cinephile Hissy Fit Podcast on the Ruminations Radio Network. As a school educator by day, Don writes his movie reviews with life lessons in mind, from the serious to the farcical. He is a proud director and one of the founders of the Chicago Indie Critics and a voting member of the nationally-recognized Critics Choice Association, Hollywood Critics Association, Online Film Critics Society, Internet Film Critics Society, Independent Film Critics of America, and the Celebrity Movie Awards.