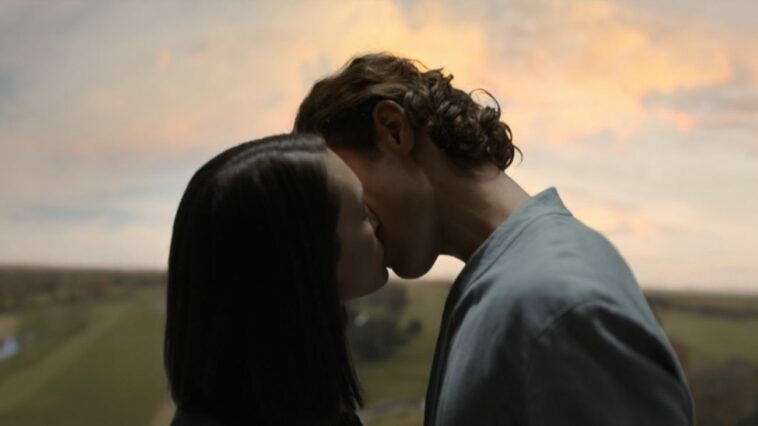 The following contains spoilers through Foundation S1E6, “Death and the Maiden,” on Apple TV+, and also references the Foundation series novels.

Welcome, dear reader, as we continue to review the Apple TV+ series Foundation with Episode 6, “Death and the Maiden.” As the kick-off to the second half of the season, this episode set the bar pretty high. For one thing, we got a lot of answers in this episode. What is Phara up to? What is Brother Dawn’s secret? Why did Raych kill Hari? The world building continues as we visit a brand new world, a moon actually, and learn the details behind this religion that predates the Empire.

We also got a lot of forward movement on various plots. The heretic makes her play and appears to have won. Brother Dawn and Azura have their first kiss. Phara takes her prisoners off world to execute the next step in her plan for revenge. Overall, it was a very satisfying episode with some really memorable moments for us to talk about.

This episode we get not just one Empire plotline, but two. That should make everyone happy. We start with Brother Day’s tradition-bucking trip to The Maiden. As he prepares to meet the “clamoring masses,” we find out something fairly shocking about Demerzel. She is one of the 3 trillion believers in Luminism. In a role reversal that you can see Brother Day finds amusing, he is the rational unbeliever who cannot understand the why of her irrational belief. Though his amusement vanishes when she suggests that she stay behind, as she is his “only real insight” into the religion.

His lack of insight shows in the confrontation that follows. He, Zephyr Gilat and Ambassador Thanwall make a nice showy political move, with Empire offering to build a moon-wide desalination network so that they will never go without clean drinking water again. Something concrete that Zephyr Gilat can offer in support of her bid to become Proxima. Like the holy water that Zephyr Halima offers to Empire, she just flows around their ploy, gives them thanks, and proceeds to demolish her Empire-backed opponent. Brother Day brought a political stick to a religious knife fight.

Back on Trantor, grandpa decides to sneak in a day of fun with the boy while dad is away on business. First stop, hunting. It’s Brother Dawn’s first time out and Brother Dusk thinks he’s set out quite the challenge for his younger self. They will be hunting a camouflaged raptor that blends in so well it is almost impossible to see. “Look for the movement, not the color,” he tells Dawn, which isn’t going to be a problem for the young man, as we find out he is secretly color blind. This disability actually gives him an advantage in this case, and he doubles Brother Dusk’s record from his best hunt. Realizing almost too late that he has exposed himself, Dawn has his helper hide three of the kills in the brush so his skill does not seem such an anomaly, but clearly Dusk is already on to him.

Second stop is the Imperial cathouse, Gossamer Court. Brother Dusk primes Dawn to voice his fears, hatreds, and resentments to his selected concubine, as her memory will be wiped at the end of the day. Before that happens, however, Brother Dusk gets a full report from the girl of everything that was said. We don’t know yet what she revealed, but it seems to have been enough to prompt Brother Dusk to send Shadow Master Obrecht out to snoop around the forest, and sure enough he finds the hidden kills from earlier that day.

Brother Dawn has no interest in the girls of the Court, as he is falling in love with the gardener, Azura. He brings her up to his quarters to enjoy the view overlooking the gardens. They step out onto the window ledge together, upping the ante on an already dangerous situation. He has her describe the beauty that he is incapable of seeing, guiding her into deducing his secret. Finally, they seal the growing bond between them with a kiss.

We peel back what feels like the final layer to the Grand Huntress’ plan, learning that she has found a legendary “planet killer” warship, the Invictus. Perhaps the only mystery remaining is why exactly she needs Commander Dorwin. Though we can surmise that the planet that she intends to kill is Trantor, and Dorwin could be the key to getting close enough to make that possible.

Beyond Dorwin, she also needs some technical positions filled in order to repair the ship, and the Deliverance manifest reveals that the Foundation has people with that knowledge. Though as Lewis points out, it’s been 30 years since they used their respective spacing skills. We’ll see how this goes. Phara promises to leave the Foundation in peace once the repair work is done, but her people are also secretly preparing charges out at the geothermal field that will destroy the entire city.

Luckily (or is it?), Salvor is drawn to that same area in a bid to take out the Anacreon corvettes. After some bonding time with dad on the trek there, she lays out a plan to attack from a safe distance. It all goes sideways however when Salvor is overwhelmed by another vision (more on that later) and has to be rescued by Hugo. Her dad sneaks in under the cover of the chaos to take out the ships with their own charges, but despite Salvor’s crack shooting keeping him safe, he eventually gets shot and sacrifices himself to take out…well, everything, turning the geothermal field into a lake of lava.

Theory #1: Demerzel introduced the genetic changes in Brother Dawn when he was an embryo.

Analysis: The differences in Brother Dawn are more than just the color blindness. He has been shown to be constantly out of sync with the other two brothers. He is apparently left handed as well. This is more than just a minor glitch.

Demerzel is an adherent of Luminism, which we find out embraces “the value of transformation, of evolution, of difference.” This coincides nicely with the warnings of Hari Seldon that discontinuing the genetic dynasty to embrace “difference” and “the new” could stave off the collapse a few centuries. If Demerzel is governed by the Laws of Robotics, she must do what is best for humanity at the expense of what serves Empire.

Brother Dawn (Cleon 14) is the first clone to be born after Hari’s trial, and some time was spent showing us that Demerzel tends to the clone embryos alone. It’s a rule even. At his Ascension, when Brother Darkness (Cleon 11) paused, turned, and said something was wrong, she ushered him along with a hand at his back. Was he too close to the mark? Maybe he even interrupted her when he came down to see his youngest self.

Theory #2: Along those same lines, Demerzel doesn’t want to leave the ship because secretly she supports Zephyr Halima.

Analysis: Demerzel defends the heretic after their initial greeting, saying that she wasn’t trying to poison Empire. When he asks for a word, her reply is “worthy,” which Brother Day takes to mean that she’s a worthy opponent. However, maybe Demerzel is indicating that the Zephyr’s brash move shows she is worthy of becoming the next Proxima. Further evidenced by Demerzel bowing to her at the final confrontation between her and Zephyr Gilat. Her loyalty to Luminism trumps her loyalty to Empire, though we can see she was at least a bit conflicted before joining the rest of her sisters.

It’s interesting to note that Demerzel deftly dodges Brother Day’s question about *how* she came to believe in Luminism, swapping it out for *why* she believes instead. You can see a momentary flash of panic in her when he asks. What is it that she does not want to reveal?

Analysis: We find out in the flashback in this episode that Hari did indeed take issue with the relationship between Raych and Gaal. It was going to keep Raych from leaving the ship. Apparently their original plan was that Hari would put an end to the gift of these extra months and be sent away in his “casket.” Sometime later (or perhaps before), Raych would also leave the ship in the programmed cryopod, and the two would rendezvous at Helicon to accomplish the next steps of the plan.

Because of their relationship though, the math showed that in all cases, Raych would not go to Helicon and would instead stay with Gaal. Hari had to make it impossible for Raych to stay on board after he was gone—by having Raych murder him. Hari has to go one way or another, for various reasons that the novel outlines and the show will no doubt get around to explaining before the season ends. This way killed two birds with one stone, so to speak.

This also implies that Gaal was supposed to stay and continue on to be a founding member of the Foundation. After all, Hari was grooming her to take his place, and he seems to purposely have left the Prime Radiant behind in his office for her to find. He also is emphatic that she not be implicated in his murder by Raych stopping to say goodbye to her.

Analysis: We’ve already talked through enough supporting evidence for this theory in previous articles that I’m 100% convinced. But now, we add the idea that Gaal was supposed to have been with the Foundation. So let’s extrapolate on that a bit. Let’s say the Vault was indeed placed by Hari or some agent of Hari’s. Let’s say it is keyed to Gaal’s DNA, in a similar manner to the force barrier that is keyed to all the Foundation members. Now Salvor, genetic daughter of Gaal, shares enough of that DNA to also pass through the null field unaffected (that may or may not be scientifically accurate, but let’s roll with it). She also receives mental messages from the Vault, sharing her mother’s inherent mentalic abilities. The Vault is indeed trying to guide her through this first Seldon Crisis, but like the AI ship that is having to deal with Gaal instead of Raych, the Vault is having to deal with Salvor instead of Gaal. As a result, the messages come across confused and cryptic.

On this week’s official companion podcast (for Episode 5), show runner David S. Goyer was joined by writer Dana Jackson again. While the conversation on the podcast is always good and insightful, there were less intriguing tidbits dropped this week. A few things worth mentioning though: