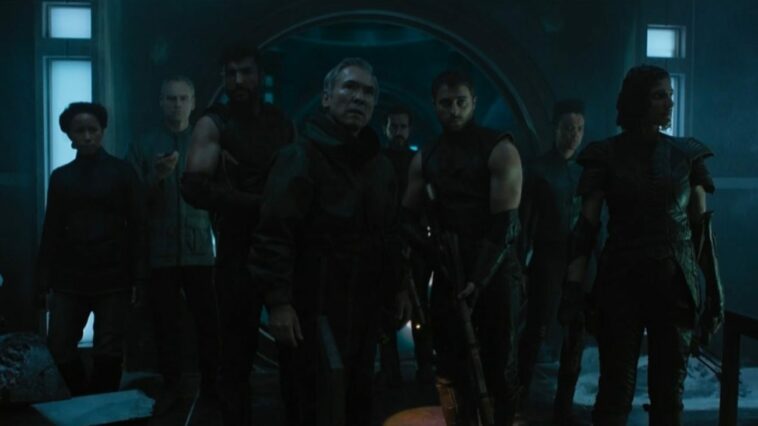 The following contains spoilers through Foundation S1E7, “Mysteries and Martyrs,” on Apple TV+, and also references the Foundation series novels.

Welcome, dear reader, as we continue to review the Apple TV+ series Foundation with Episode 7, “Mysteries and Martyrs.” Two weeks ago, I was a little down on Episode 5, calling it the weakest episode of the season thus far. Well, I hate to say it, but I think Episode 7 surpassed it. Don’t get me wrong, I’m still loving the show. All of our storylines made appearances in this episode, no one was left on the shelf for the first time this season. I appreciate that. And amongst those, the Empire scenes continue to just knock it out of the park.

However, the Terminus storyline is getting a little monotonous, having been on autopilot for a few episodes now, if we’re being honest. It was refreshing to see Gaal stand up for herself with Hari, but the hand-holding exposition and reinforcing flashbacks were a bit tedious. Also, the editing in general is clearly suffering from Covid restrictions, with weirdly strung together dialogue, noticeably trimmed of all white space, and clunky scenes that could have benefitted from a reshoot or two. At least that’s what I’m attributing it to, because I know they can do better.

That said, this episode did tee us up for what showrunner David S. Goyer has repeatedly said is his favorite episode, Episode 8, “The Missing Piece.” And that, of course, gives us plenty to talk about.

It’s field trip time out in the Anthor Belt, with everyone gliding over to the Invictus one-by-one to avoid the attention of the ghost ship’s automated rail guns. As they all clunk down on the surface of the inner ring, Hugo goes sailing by, unable to get his 30-year old suit’s thrusters to respond properly. With that, off he plunges into the void…to go call for help at one of the abandoned Thespian mining facilities. Come on now, they’re not fooling anyone with that “death” scene. I’d also hazard a guess that he’s not going to be calling the Empire. This will be how Thespis gets drawn into the crisis, leading to a resolution more in tune with the novel, I hope.

The rest of the boarding party continues to get whittled down one-by-one as they work their way towards the bridge. Which doesn’t matter so much, because it turns out this was a suicide mission all along. If they are unsuccessful in redirecting the Invictus’ random jumps, they will likely suffer the same fate as her original crew—marooned and doomed somewhere outside the galaxy. If they are successful, Phara intends to jump the ship right into the beating heart of Trantor. Either way, no one is leaving the ship.

Back at the Salt Palace, Brother Day just can’t catch a break. He fairly well jumps down Demerzel’s throat when she tries to excuse her “staggering betrayal.” She falls back on her programming, which would have rendered her incapable of kneeling if she were being disloyal. But a sharp Empire asks the right question, did she want to kneel?

He tries the usual negotiating tactic with Zephyr Halima, coming down “into the trenches” to see what additional carrots he’ll need to offer to win her over. Halima is having none of it though. She wants the genetic dynasty ended, same as Hari suggested. She articulates her “ask” with a barely veiled threat of future religious terrorism akin to the Star Bridge bombing, and then turns her back on him to attend to other people who actually have souls.

Rather than play defense, Brother Day decides to go on the offense. He is going to walk the Great Spiral and let the Triple Goddess decide whether or not he has a soul. That’s kind of a brilliant solution, assuming he’s up for it. He appears to be fit, but the body will suffer. Is he headed towards a “very noble death” of his own? My prediction: Lady Demerzel will have to reveal that she is inhuman to save Brother Day, but in doing so she will show that someone without a soul is capable of growth, and her action will end up tipping the scales against Halima.

Things on Trantor start out light hearted enough, with the new lovers sneaking around for a quick romp in the greenhouse. But when Azura offers Dawn a present of color-correction adhesives, things get really dark. Turns out that he is every bit as disposable as an ascending Brother Darkness, with a hot-backup clone waiting in the wings. It’s completely diabolical, and yet he defends the system as necessary to protect the Empire from “mistakes” like him.

Undaunted, Azura suggests he escape. Change his face, flush his nanobots, and disappear into the throng of Trantor. She takes him on a guided virtual tour, showing him how the Scar has actually breathed life into the crowded, chaotic planet. This is the reason he jumped and why he showed her his replacement. He can’t go on living like this, hiding his catalog of little differences from his brothers’ ever watchful eyes.

Brother Dusk interrupts the show to remind Brother Dawn of the dinner bell. He admonishes that punctuality should be innate to a Cleon, not practiced. Very telling. He also chides Dawn that nothing outside the palace walls is relevant, as if he knew exactly what Dawn was viewing before he arrived. There can be little doubt that they included this quick little appearance for a reason. Brother Dusk likely knows everything, and it’s also likely that this is not going to end well for Azura, and probably Dawn as well.

Back at Helicon, we find out that Hari is actually a “quantum consciousness,” not a hologram. Yet, I think I’m still going to refer to him as Hologram Hari, thank you very much. Freed of his physical body, this new version of Hari is quite saucy, really laying into Gaal for screwing up both his plan and his replan. They trade exposition dumps to establish pretty much everything that we’d already deduced about the how and why of what went down aboard the Deliverance.

The tension ratchets up as the Raven begins to enter the debirs field of Helicon’s dark star. Hari presses Gaal as to why she showed up in his cabin that night. Again, the flashbacks scroll through every little hint that we’ve noted pointing to Gaal’s apparent mentalic abilities. It all comes to a head with her ninja-like catch of the space debris that blew right through the windshield yet was somehow stopped by the thin little patch panel she’s holding. She can “feel” the future.

To be fair, we did learn or confirm a few new things in all of this:

Let’s end on a theory. So given all of this, Hari’s body has not been recovered here aboard the Raven. His consciousness was downloaded, and that’s all that was needed. Why the Chekhov’s casket then? Buried somewhere in a comment I can no longer find (my apologies, or I would give credit), some sharp-eyed viewer noted that Hari’s casket looks somewhat like the Vault on Terminus. What if his custom made casket zoomed ahead of the Deliverance and transformed into the Vault? Or at least merged with it. Perhaps a second Hologram Hari could be made from scanning his physical brain. So physical brain Hari helps the First Foundation, and quantum consciousness Hari helps the Second Foundation.

Here I try to point you to a few of the more interesting and informative news items over the last week (or so) related to Foundation. We’ve got a lot of podcast tidbits to share this week, so just two quick items from Reddit:

On this week’s official companion podcast (for Episode 6), show runner David S. Goyer was flying solo this time. Here’s a few of the more interesting tidbits:

As mentioned last week, Foundation and Podcast had an interview with David S. Goyer on Friday, and they got a whole lot more juicy stuff out of him. Goyer gave thoughtful, thorough answers, and talked in depth about many process aspects of the show, like the writers’ room, props, costuming, score, etc. He also promises to come back on the podcast once season is over and he can talk more freely about some things yet to come. Beyond all of that good stuff, here’s the really good stuff:

I was called out by Redditor u/TheirDarkMaterials (a fellow His Dark Materials fan, so they can’t be all that bad) for saying that Demerzel bowed to Zephyr Halima in last week’s article. Indeed, Demerzel excuses her actions with much the same clarification, that she was bowing “to the Mother,” not to Zephyr Halima. I was admittedly confused as to how far along in the Proxima selection process we were with what was now obviously just a pair of dueling eulogy speeches. Nonetheless, the whole point of that scene was the very public impression of betrayal that it left with Brother Day, pushing him toward yet another rash decision made without consulting her.