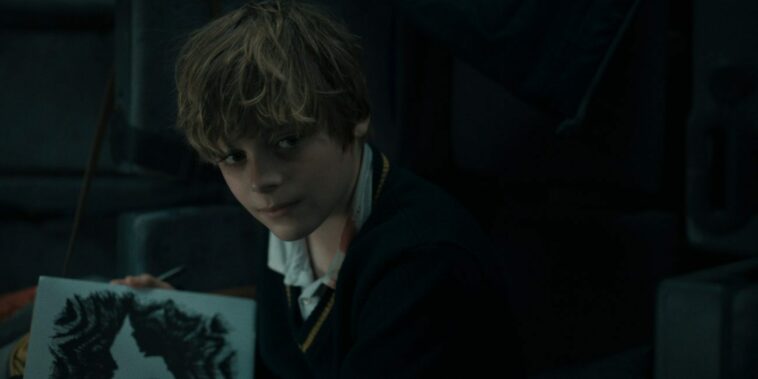 The following contains spoilers for Invasion S1E4, “The King Is Dead” on Apple TV+

This is a waltz
Thinking about our bodies
What they mean
For our salvation
With only the clothes
That we stand up in
Just the ground
On which we stand
Is the darkness
Ours to take?
Bathed in lightness
Bathed in heat

When I arrive
Will you come and find me?
Or in a crowd
Be one of them?
Mother wants us
Back beside her
No tomorrows
At peace

Invasion S1E4 ends with “Suspirium” by Thom Yorke playing over the credits. I hope you sat and let them wash over you; took a deep breath. The tone is emblematic of what the show is doing in general, which surely subverts the expectations of many tuning in.

Invasion isn’t about an alien invasion—at least not so far—so much as it is about the reactions of people to it, when they don’t even know yet what it is.

Something is happening. Things are going wrong. Phones don’t work and the power is out. The news speaks nebulously of terrorism, which along with Trev’s scenes in Afghanistan might have played better in a previous decade than it does now, but that isn’t quite to the point anyway. Even within the world of Invasion, these speculations about terrorism serve more as placeholders than answers. The characters in this story simply do not know what is going on, though it’s not clear how many of them have begun to suspect it’s less terrestrial than the news imagines.

Perhaps the landing parties are coming and more direct destruction awaits, but for now we dwell in the mystery, knowing from the title what our friends on screen have yet to begin to truly grapple with.

It continues to feel to me like no one is quite as freaked out as they should be, but it’s an odd criticism when it’s so clear that Invasion is interested in exploring the extent to which our day to day concerns largely keep us from pondering global questions. Even Trev (Shamier Anderson) and Chavez (Alex Hernandez), who have seen an alien spacecraft, just kind of say that was weird along the way to expressing their desire to find their comrades and go home. (Though of course Chavez being mortally wounded might have something to do with this.)

The series remains absolutely gorgeous, however, and frankly plot is overrated. We take the time to bask in affect here, accentuated as it is by the framing of each shot, shifts in focus and just superb sound design. I trust more action will come in time.

As S1E4 ends, Mr. Murai (Togo Igawa) asks Mitsuki (Shioli Kutsuna) if JASA has a bigger sound system and oh boy do I want to hear that mix of rumbling bass and burbling noises louder. Go back and listen again on your headphones if you didn’t get the effect the first time. And then the Thom Yorke hits.

Apparently I may have misinterpreted something last week, as Mitsuki says that it was Hinata Murai (Rinko Kikuchi) who said “wajo,” as she talks to the latter’s father. That both makes more sense and is somehow less interesting to me than the idea that the aliens were speaking Japanese, but so it goes.

It remains an obscure term to be said, unless perhaps the alien vessel looks like a wajo castle, but I don’t think the one we saw in the desert did.

It does seem to indicate that Luke (Azhy Robertson) heard Murai talking somehow, which is intriguing, but it’s an odd term to hang a mystery on. I wonder if we’ll discover that this is some kind of homophone for what is actually being said, or if there will be some other way it all comes together. Perhaps Wajo is the name of Hinata Murai’s childhood sled.

Speaking of Luke, he has a shard of junk metal he got…somewhere, and is very possessive of it when Sarah (Tara Moayedi) finds it. How long has he had this and could it relate to his lack of nosebleed, etc.?

Luke also runs away from his family and tells Aneesha (Golshifteh Farahani) it was because he wanted to freeze time so things wouldn’t get worse, which makes some sense as an impulse—to simply flee the scene of his parents fighting as though getting away would keep them from splitting up—but I can’t help but be a little suspicious of this and of Sam Healy  Patrick (Michael Harney)  taking them in and offering them cocoa. He just seems a bit too nice, and we know that Luke has some kind of connection to the aliens, so I can’t help but wonder if what happened may be a bit less mundane than we’re led to believe.

The King Is Dead

The bus crash kids wake up to discover that Mr. Edwards (Tom Cullen) has died, and of course struggle to believe it at first. Monty (Paddy Holland) bullies Casper some more, until at the end of S1E4 the latter seems to have taken his place as the leader of the group, at least in terms of the decision to leave the crash site.

The most interesting bit in all of these scenes, however, revoles around Casper’s notebook. They find a piece of metal, which seems to be from a Russian satellite. That makes sense, or at least tracks with other things we know about what has been going on. But then Casper flips to a page in his notebook where he seems to have drawn the very thing he’s just seen for the first time—at least I think the Cyrillic letters are the same—and along the way we see pages which seem to feature Jamila (India Brown) fighting a monster.

So we have to wonder now if Casper can in some way see the future, or at least a version of it. Or perhaps it’s limited to things with regard to the aliens, and stems from telepathic communication or some such thing. We really don’t have enough information at this point to do anything beyond speculate.

Four episodes in, Invasion continues to be a slow burn. Knowing that an alien attack is afoot, it’s a little hard at times to feel invested in the Malik family drama, or the power struggle between Monty and Casper, though it’s a testament to the show that I am as invested in these stories as I am. I’m afraid I can’t quite say the same for Trev’s story so far, though his proximity to action might make up for that soon.

Everything in Japan is simply brilliant, however, and I would be remiss not to give a few words to the relationship dynamics portrayed between Mitsuki and Hinata, whose love has felt real and lived in from the get-go, even as the latter has died. Mitsuki’s grief is palpable, her homophobic mother can shove it, and her pairing now with Hinata’s father offers what to me is the most intriguing storyline as Invasion moves forward.

I can’t wait to find out what’s going on with that noise.