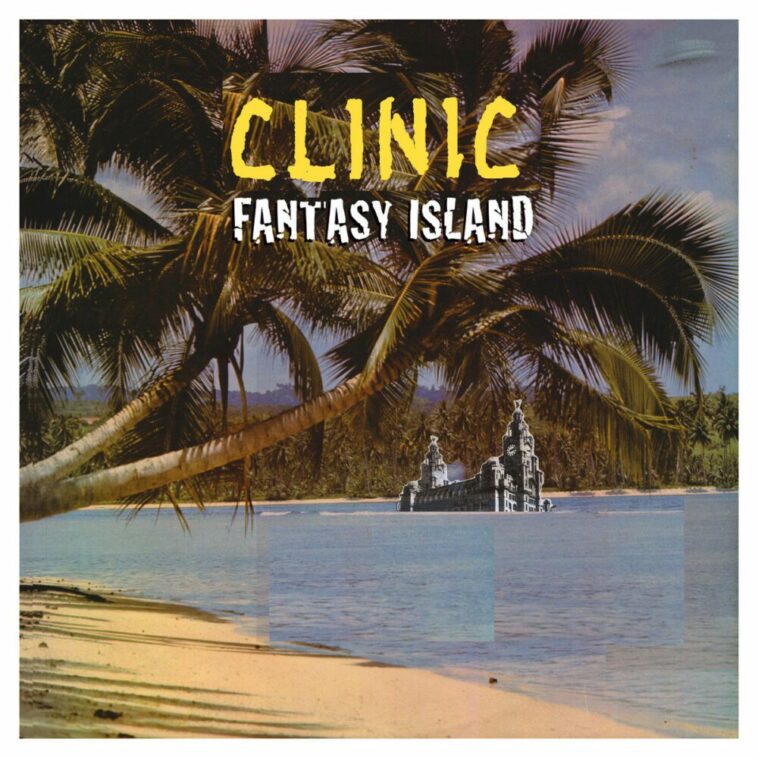 One of the more arresting things about Clinic has always been the vocal delivery of Ade Blackburn. Nobody sounds quite like Blackburn, whether through his simultaneously narcoleptic and acrobatic delivery, or Clinic’s dazzling psychedelic production choices. On Fantasy Island, Ade dials it back a little bit, but gives in to druggy disco vibes. Where previous Clinic records shared stylistic flourishes with Radiohead, there’s a closer line to be drawn to LCD Soundsystem this time around. But, this time, the dance-punks have left the ecstasy in somebody else’s hands and gone for the ‘shrooms. The line to any reference point is never straight, or at the very least, you shouldn’t try to walk it that way.

Fantasy Island is an album of wonderfully fun extremes. There is a uniformly non-uniform sound to be found. Clinic is always introducing something new to the mix. Everything is done with (oh no) clinical precision, for something so freewheeling and wild. Clinic has always been able to tap into something fresh and new, all the while not straying from sounding like themselves.

“Fine Dining” is a a narcotic ripper, urging listeners “all into the void, all into the void” while grooving up a storm. The album is never not grooving, best evidenced by the title track. Behind a cymbal rush that can only be described as bonkers, Blackburn and co-conspirator Jonathan Hartley throw everything from every Clinic record at the wall. The vocal stutters and overlaps are enough to send a listener into a system of blinks, to say nothing of laser-powered synths and shimmers as abrupt as emergency u-turns. “Fantasy Island” stuns.

Though we’re going from leisure to the abyss, per Fantasy Island‘s themes, it is a breezy listen. It’s impossible not to dance to, at least a little bit. The occasional repeated bits—never quite choral, never quite chanting—invite swaying or mumbling along almost without fail. You might even dance! You might even sing! It might look a little bit like you’re doing something from Thriller on opiates, but that’s okay. Clinic isn’t here to judge, and Fantasy Island is here to encourage. Bring a sitter if you’re not sure you can handle. There’s no shame in that.

A strange stand-out is “On The Other Side…”, where Fantasy Island takes a surprise turn into lounge. This lounge could be Twin Peaks‘ Black Lodge, given the mysterious instructions and absolutely unhinged jazzy horns, but Clinic do their best to make it inviting, the instructions going “Close your eyes,” fading into strums, before the rhythm bursts (and does it burst) back into frame. It creates a nice counterpoint to the very organic, earthen sound of Ade Blackburn’s vocals. It wouldn’t fit well on any other Clinic record, and adds to the very unique sonic fingerprint that Fantasy Island uses to ink up the page.

Fantasy Island lends itself very well to repeat listening. Nothing is buried in the mix, so there’s plenty to dig into and plenty to miss. Sometimes a grumbled Ade Blackburn line turns into something much more clear on another blush, and as such, Fantasy Island has quite a bit of longevity. It invites deeper listening because, despite discussion of theme, Clinic has always been allergic to any sort of theme or anything to chomp on. Not that the meal is meager in any way; it is invested in presenting multiple courses. One minute you’ve got dinner, the next, your surprise midnight snack.