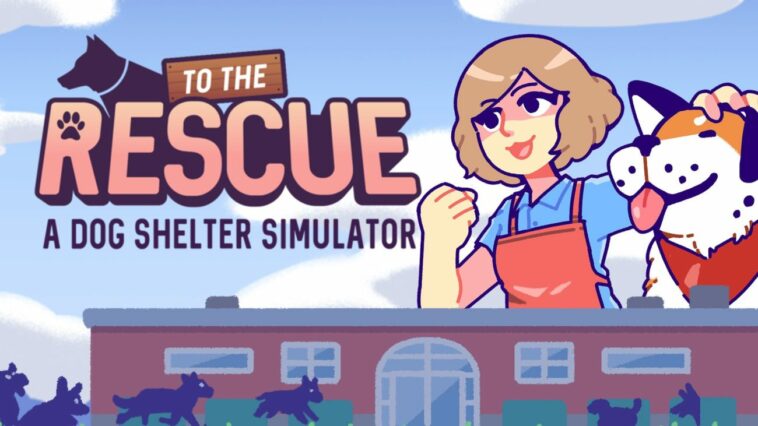 To The Rescue! is a dog shelter simulator, and works similar to running a store except with adorable doggies. It’s also helping real dogs in the process because 20% of profits from To The Rescue! will be donated to The Petfinder Foundation.

The game received funding from August 6th to September 3rd of 2019 on Kickstarter. I actually remember seeing it at the time but I was unable to contribute, so I’m incredibly thankful to Little Rock Games for the early game key. I will be making a donation to The Petfinder Foundation directly to help out.

The art for To The Rescue is adorable with chubby character models and soft colours. Each dog breed is easily recognizable and I was always excited to see new ones. There are a few character models to choose from when you start a new game with various skin tones.

Each dog has a set of stats that boost its adoptability. You’ll need to make sure each pup has food and water, is bathed regularly and is free of viruses and parasites. When a new dog arrives it’s a good idea to give them a round of vaccines and a wash before setting them up in a kennel either alone or with others.

Just like real life each dog has personality traits such as being lazy, good with kids or cuddly. The opposite also holds true with some having negative traits like separation anxiety or being bad with cats.

When a visitor arrives at your shelter they will either have a broad request (I just want a dog!) or could have specifics in mind (I’m looking for a terrier who is well trained!). Matching a dog to this criteria will boost a meter; your goal is to turn it green so it’s vital you choose the right animals. Even if you don’t exactly have what they’re after, a 4-star pup will go a long way. Make sure your dogs are in tiptop shape—running a shelter isn’t cheap so adoption fees and donations are your bread and butter. Potential adoptions are showcased in small kennels. A ribbon can be used to fast travel dogs in and out of the area so you don’t have to drag everyone around on leashes. 5 dogs can be shown at once and you’ll always want to show off the maximum. I missed out on several occasions by only having 4 dogs out.

Running your shelter day to day involves feeding, topping up water bowls and scooping poop while also checking new arrivals and assisting potential adoptions. An alert and icon will appear for each new event and can be highlighted to view details. Two days in a row I had a litter of puppies arrive leading to a scramble as I made space! You can see your total dogs and shelter space at the top of the screen. Staying after hours will cost you extra overtime pay.

Once you’ve unlocked them outdoor Play Areas can be built, where you can play a few games with your dogs: fetch, tug-of-war and most importantly: pet them! Dogs’ happiness meter does not decay while in Play Areas.

Injured dogs will require immediate medical attention. Administering first aid and shots happen in a medical room. This is also where you’ll euthanize dogs if it comes to that. If that sounds harsh for a cutesy game, the developers state how they didn’t want to sugarcoat what happens in real shelters. However, if this makes you uncomfortable or you simply don’t want to have that option, you can select “send away” in the settings menu.

At the front desk sits your trusty laptop where you can view your Dog Logs, purchase food, upgrade the shelter, check social media and use your skills points.

From Dog Logs you can also check out your Foster Network (if you have the skill unlocked). Each foster home can house a different number of dogs and may have restrictions such as no puppies.

The online store is where you’ll buy dog food, which comes in 4 varieties (each dog has a preference), medicine, upgraded leash capacity (the number of dogs you can bring with you at once) and better aprons, allowing you to hold more items.

Next is BarkBook, a combination Twitter and Facebook. After a dog is adopted, sometimes the new owner will upload a pic of their new canine companion and this can boost the shelter’s reputation. Having a good reputation is extremely important. You’re not just a business but a part of the community and how the locals feel about the shelter will determine how many visitors you get. Scheduling events can give you some extra funding, increase the number of visitors or other helpful perks. These all take a different amount of time so keep an eye on the clock!

Upgrading the shelter is very simple, from buying and placing new kennels to changing the wallpaper and flooring. Undesirable areas or mistakes can be demolished. After you unlock metal and deluxe kennels you can level up existing ones from here as well.

You’ll also be able to expand your shelter by buying more property. Once you’ve done this you can begin to hire Helpers, staff that will assist in daily tasks. Each Helper has a different energy and enthusiasm level that determines how long they will work before they need to head to the Break Room. You’ll need to build these from the upgrade menu. Break Rooms increase your staff capacity. They also need to be paid! Wages will be deducted at the end of the day. Hiring Helpers can be done from LeashedIn, where you can take a look at each individual’s resume.

LeashIn gives access to your skill trees. (Dog) handling, Logistics, Public Relations, and Handiwork. Choosing some skills will lock you out of others so a confirm button gives you a moment to look before you leap. You can offer discounts, boost a trait or persuade an adoption by upgrading the Public Relations skill tree.

Finally, the last menu covers your daily expenses and total adoptions. Grants give cash bonuses for meeting certain requirements (give 10 dogs a bath, etc) and achievements are similar but on a smaller scale. Adopting out a specific number of dogs or meeting other milestones rewards you with cash.

Taking into consideration how early I started playing, glitches were expected. Dogs clipping outside their kennels is commonplace. Using the Play Areas was iffy because my dogs would just escape. Thankfully the next day they’d be in the holding kennel where new dogs arrive so they weren’t lost forever. Unfortunately, this means I missed out on boosting their happiness meters—but, run kennels that are dual inside/outside spaces are an upgrade so I ended up just buying a bunch of those and demolishing my Play Area completely. Slowdown and stuttering also happened regularly which was fixed in an update. The issues were never game-breaking or impeding my progress, just minor annoyances.

Even without these features it’s a well-rounded game and has an extremely addictive gameplay loop. It’s exactly the kind of title I can lose time to and I’ve already sunk 10 hours into it! If you like simulators you’ll love it. If you like doggos you’ll definitely love it—while supporting real dogs in the process.

A Steam key for To The Rescue! was provided for review purposes.