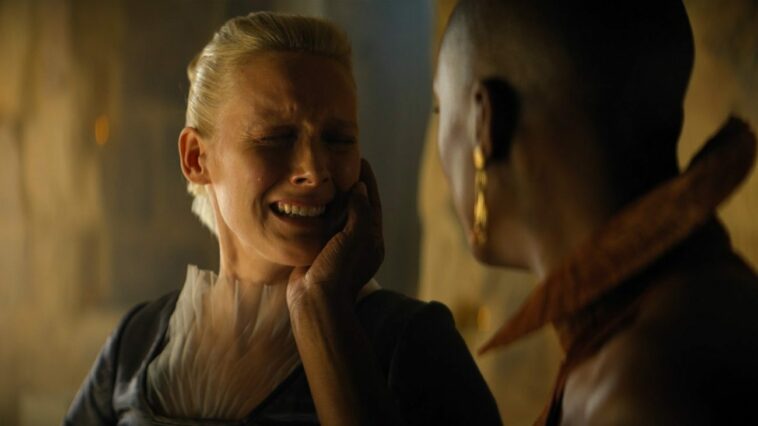 The following contains spoilers through Foundation S1E8, “The Missing Piece,” on Apple TV+, and also references the Foundation series novels.

Welcome, dear reader, as we continue to review the Apple TV+ series Foundation with Episode 8, “The Missing Piece.” While most of the episode titles have been pretty straight forward in their applicability to the content, I have to admit I’m not really sure who or what was the “missing piece” in this episode. Ah well. Maybe it’ll become clearer in hindsight as we close out the season with the final two episodes in the weeks ahead.

Not that it took away from the enjoyment of watching this epiode. It’s pretty obvious now why showrunner David S. Goyer said this one was his favorite of the season. It was a minor disappointment that we are back to putting one of the storylines on the shelf again, with the honor going to Brother Dawn this time. The Brother Day scenes more than made up for it however, with Demerzel just straight up stealing the show in the end. It’s departures for everyone, as Day leaves the Maiden, Gaal leaves the Raven, and Salvor leaves the entire galaxy potentially.

We start with Phara being all chatty with Salvor about her truncated childhood and her corresponding holy quest for revenge against the Empire. Their boarding party continues to plod along through the ship, getting picked off one-by-one as if they’re in a schlock horror movie. Eventually, Phara’s reverse Stockholm syndrome leads her to let her guard down enough for Salvor and Lewis to escape onto the bridge, just minutes ahead of the next scheduled jump.

While Phara has been trying to sway Salvor, Salvor has been cozying up to her second, Rowan. She can sense doubt in him. To Phara, there are no more children back on Anacreon, only warriors, but he actually has a daughter back home and probably disagrees. Maybe, just maybe, we are starting to get a glimpse of the Salvor who will someday embrace the mantra that “violence is the last refuge of the incompetent.” In between her fist fights and shoot outs with the Grand Huntress, of course.

Even though she didn’t get hooked up to the Invictus’ navigation system, I would guess that somehow it will intuit her desired destination and drop them all into a perfect orbit around Terminus. Note that while Phara passed out as the ship jumped, Salvor was still awake (just like Gaal). Perhaps while in transit, she’ll get to the navigator’s pod, plug herself in, and give the ship the guidance it seems to desire. Maybe she won’t even have to plug in. Presumably, when the Invictus jumped, it took all the Thespin lancers buzzing around with it, since they are also going to be needed to play out the final act of this crisis.

In last week’s review, I said Hologram Hari was getting pretty saucy with Gaal. This week, it’s Gaal’s turn, and she has had it with Hari keeping her in the dark. Granted, Hari makes a pretty good point that her “prescience” has already screwed up the plan twice now. Perhaps a little caution is not wholly uncalled for. But Gaal’s instincts are telling her to leave, and she forces the issue by taking a crowbar to the heat transfer system. We are dropped the hint that Hari could just program the cryopod to go where he wants it to go. For now though, we are left to assume that once again, Gaal has checked out of the story, and we won’t see her again for 138 Imperial standard years. Or next season, whichever comes first.

There are a few interesting revelations that come out of Hari and Gaal’s back and forth. Hari is forming a sister Foundation, which we’d expect from the novels, but so far they have nothing to do with mentalic abilities, which is a change. In fact, Hari is interested in studying Gaal’s ability to see if it could be of benefit to the Second Foundation. Spoiler alert: yes, it could. Goyer has said that he did not want the formation of the Second Foundation to occur off screen and have them sweep in as a deus ex machina in the third act to save the First Foundation. Apparently, we’re going to start from the ground up.

Skip this part if you do not want a serious book spoiler. In the novels, the actual answer is Trantor, being the center of the Galactic Empire, “where all stars end.” Which was kind of a cool answer, as they were hiding in plain sight behind enemy lines all along. However, recall that Gaal’s opening narration from Episode 1 implied that Star’s End was at the edge of the universe, similar to Terminus: “When I was a child, I told my mother I wanted to learn every planet in the Galactic Empire… beginning in the center and moving out to Star’s End.” More unreliable narrator trickery, or a hint at a future deviation from the novels for a final location of the Second Foundation?

Brother Day’s big gamble paid off and he is feeling pretty smug about avoiding one of Seldon’s dire predictions. Not just in calling the audible on walking the Great Spiral, but also in bucking tradition by leaving Trantor and coming out to the Maiden in person. Through his not-at-all rash decision, he has not only preserved their legacy, but further cemented it with the 3 trillion followers of Luminism. No way Brother Dusk could have pulled this off. But the victory comes at some serious personal costs.

The first is his relationship with Demerzel. We can see Empire is still smarting from Demerzel’s “betrayal” as he rips the salt crystal off her bracelet, garnering a small gasp from her. Upon his return, he continues to test her loyalty by sending her to quietly assassinate Zephyr Halima. It was not enough to rub the heretic’s nose in his victory as he made his way through the “clamoring masses” he had originally anticipated.

As we previously discussed, Demerzel clearly backed Halima, initiating with her opinion that the Zephyr would have made a compelling Proxima. Like Brother Dawn confessing to the concubine who will have her memory wiped, Demerzel opens up to Halima and tells her the truth about herself. She is a prisoner in her own mind, able to have disloyal thoughts, but unable to act upon them. She thinks she has no soul, because if she did, perhaps she could disobey. Halima sees through the programming to the compassionate, remorseful soul within, forgiving Demerzel even as she is unknowingly administering her own death.

The second cost to Empire is even more personal. As haunted as Day has been by the “ghost of a dead man” up until this point in his life, his encounter—or lack thereof—in the Mother’s Womb is sure to haunt him for the rest of it. Even Demerzel, a robot, was graced with a vision. His mind flashes back to it as he is attended to by the Spacers, whom he declared so genetically altered that he barely thinks of them as human just a few days ago. Now, he has to face his own lack of humanity. One wonders how much of a push Demerzel is going to have to apply at his future Ascension, and how much she will inwardly enjoy it.

As always, here are the highlights of this week’s official companion podcast (for Episode 7) from show runner David S. Goyer: