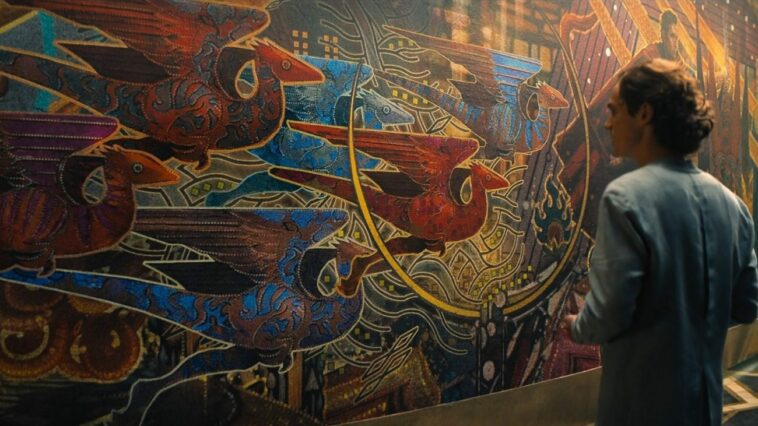 The following contains spoilers through Foundation S1E9, “The First Crisis,” on Apple TV+, and also references the Foundation series novels.

Welcome, dear reader, as we continue to review the Apple TV+ series Foundation with Episode 9, “The First Crisis.” This week we whittle down to just two storylines, with Gaal and Brother Day having resolved their core conflicts last week. In this episode, we get resolution to the conflicts at the heart of Savlor Hardin and Brother Dawn’s arcs. Seemingly, the season is pretty much wrapped up one episode early. The bad guys are all dispatched, disarmed, or captured, and all that remains is to see how we move forward from here. And yet…

Recall that in the Foundation and Podcast interview, showrunner David S. Goyer promised that in next week’s finale “some crazy sh*t happens.” Perhaps there was a hint in Salvor’s mom calling the Vault a “door.” A hint that it holds more than just another instantiation of Hologram Hari. What that might be though, I cannot imagine. On Trantor, we might expect Brother Day to make another rash decision. Or two. And honestly, I’ll be surprised if we don’t end on some sort of cliffhanger with Gaal, and I doubt it will be set 138 years into the future.

Well, I’ve got to admit, this one caught me off guard. Sure, there were people theorizing that Azura could be a plant, but I never took it seriously. In hindsight, her access to technical devices did seem a little too easy for a mere gardener, and that speech about the Scar was probably a dead giveaway. Call me a sucker for a sappy romance, I guess.

Of course, before that big reveal, there were several other nice moments leading up to it. Like Dusk’s using Dawn’s color blindness to mask the additional three raptors in his painting. Ah, that was so diabolical, I loved it. I also loved how the hologram busts of the dead Cleons follow Brother Dawn, staring him down, as if the past generations are passing judgment on him. Rightfully so at this point, as his attempts to fend off the Shadow Master are truly pathetic.

It would seem these are likely the same folks who brought down the Star Bridge, having been working on this for decades. It could even be that whole terrorist attack was an Ocean’s 11 style distraction while the real goal was getting some of Cleon I’s DNA. It was an “illicit biohacking facility” that was raided by Demerzel at the beginning of Episode 2, after all. Speaking of, I’m glad we don’t have to try to shoehorn in her somehow justifying doing the genetic manipulation herself. Though we will just have to turn a blind eye to how in the world she would not pick up on the differences as she raised Dawn from birth.

Now all that remains to be seen is whether Brother Day’s experience on the Maiden will or will not make him serene towards Dawn’s genetic anomalies. My prediction would be that we’ll see a new Dawn decanted, as this show doesn’t show us something that enticing without following through on it a few episodes later.

I also did not see it coming that Lewis would connect himself to the navigator chair and save everyone by wishing them home. Redeemed at last. That said, things on Terminus are not good. The Null Field has expanded to cover the entire planet, leaving Salvor as the only person who can possibly resolve the crisis, acting as some bizarre amalgam of chosen one and deus ex machina. I still want to believe that the writers will disabuse Salvor of the idea that psychohistory pivots around the actions of an individual, but I’m starting to lose faith a little bit.

Beyond Salvor always seeming to be reading one page ahead in the script, I have a lot of quibbles with other things related to the Terminus storyline. In this episode, there was a higher than usual amount of reality bending in service of “cool” scenes:

Despite all of that, the general gist of the novel’s first crisis is coming together. As predicted, the Thespins were pulled along so that they could be part of the resolution. And low and behold, the Vault contains an interactive AI hologram of Hari, just as predicted.

We don’t normally delve into Gaal’s voice-over narration too much in these articles, but the ones sprinkled throughout this episode stand out from the rest and deserve a little of our attention. It all starts out amicably enough with Gaal talking about history as mankind’s greatest invention. Fairly typical of what they’d done thus far, seeding the episode with an overarching narrative for us to consider as we watch. However, as she says, “a villain becomes a hero, a lie becomes a truth,” the camera shows the 3D printed statue of Hari Seldon. Coincidence?

From there, we get three more voice-overs, also a little unusual. When Brother Dawn discovers the secret hidden in Brother Dusk’s painting, she talks of “what we choose to tell our children, and censor.” No longer carefully curating and shaping history, but outright adding and subtracting from it. As Salvor lands on Terminus, she talks of “all the facts fall[ing] short of believability” to the point where “fantasy feels reassuringly solid.” This is also where Gaal adds herself to the story, telling us “since this is my history, I get to decide which parts have been subtracted, which have been added.” Lastly, as Salvor triggers the Prime Radiant, Gaal talks of history now as a weapon. “Used correctly, the past can alter the present.”

Taken as a whole, this is a little bit disturbing. We know that showrunner David S. Goyer likes unreliable narrators, but what do we make of an unreliable narrator who flat out tells us she is adding to and subtracting from the story as she is telling it? When they showed us Brother Day’s vision of swirling salt in the Mother’s Womb and then later revealed that there was no vision, that was a perfect use of the trope. Chef’s kiss. Loved it. But if everything we are watching might be fantasy, I’m not sure how I feel about that.

This brings me to a theory, and as with other theories I’ve put out there, this one might be way out in left field. I’m wondering if they might not be setting up Gaal to be the Mule. OK, crazy, I know, but bear with me for a second. In the recent Mindscape podcast interview (more on this below “In the News”), Goyer had a few things to say about the Mule. He says that the Mule will and will not be showing up in a way the audience is expecting, and indicates that he is interested in showing how the Mule became the Mule.

The Mule is the greatest enemy of the Foundation, but we need to see them become that greatest enemy. What if the Mule started out as an ally? What if the mentor-student relationship that has been touted as being at the heart of this series is one where the student turns against the mentor? What if this is why Gaal has been used, abused, and kept in the dark by Hari this entire season?

Gaal Dornick hardly exists in the original novels, making her selection as the character in which the show’s continuity is invested a strange choice. Of the recurring characters who will give us stable anchors throughout the upcoming seasons (Cleon, Demerzel, Hari), she is the only one who is completely human. Doesn’t that stand out as strange? Cleon is the “bad guy” of the moment, but we know his destiny is to fail and fade away. Demerzel could step up into the role, but that would go very far against Asimov’s vision for robots. I don’t think they’d go there. That leaves only one other recurring character to be Moriarty to Hari’s Sherlock.

On this week’s official companion podcast (for Episode 8), show runner David S. Goyer was joined by consulting producer and writer Liz Phang (who was primarily responsible for revisions on the Maiden storyline). Here are a few of the more interesting tidbits they revealed:

Goyer also did another lengthy podcast interview, this time with the Mindscape podcast. As always, there were a lot of things discussed that are worth passing along: