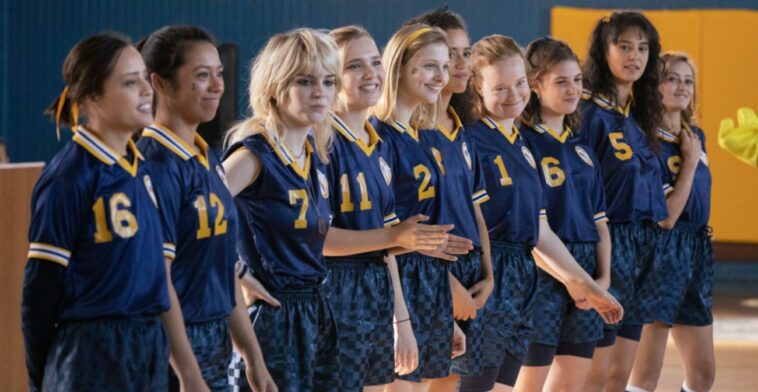 The following contains spoilers for the premiere of Yellowjackets, S1E1, “Pilot” (written by Ashley Lyle & Bart Nickerson, and directed by Karyn Kusama)

The premiere of Yellowjackets haunts me.

This makes sense, of course, given the dark nature of its opening and closing scenes, along with all of those moments in the woods interspersed throughout the hour—the masks, the ritual, the cannibalism…

But it’s more than the content of these scenes; it’s the elliptical form that they provide. In between those moments in the past of 1996, wherein the girls prepare for Nationals and the present moments of 2021 narratively, the events are also in-between thematically, in a kind of liminal space outside of the confines of normal reality and its strictures.

The mystery of Yellowjackets lies not in a question about what happened after the plane crash, insofar as we can already make out the broad strokes of that. It lies in the wondering of how it happened in all its gruesome detail.

But as much as I want to learn those details, I also almost sort of don’t. The form of Episode 1 leaves so much exhilarating room to dream, sparking the imagination to such a degree that the specter of those scenes in the woods will hardly leave my mind. It’s wonderful.

I do expect that Yellowjackets will fill in the events after the plane crash as it proceeds. It virtually has to in order for the 1996 timeline established in the premiere to continue. It wasn’t until after I’d finished watching S1E1 that this started to frighten me, as I began to think about the girls we did not see adult versions of in 2021…

The pilot ends with the reveal that it is Misty (Samantha Hanratty) behind the mask of one who seems to hold a position of importance in the circle in the woods. Misty who was so on the margins you might have missed her. Was she at the party, or was that something like a hallucination? And did anyone really care one way or the other?

She’s on the sidelines at the pep rally, screaming her heart out for the team she clearly serves as an assistant to, and she’s there when Allie’s leg is broken on the field, running to help before being quickly brushed aside because she doesn’t know what she’s doing. In the montage before the girls board the plane for Nationals, there’s Misty, rapt in aesthetic contemplation of a rat swimming in a pool.

The adult Misty (Christina Ricci) is also at the margins of the Yellowjackets premiere, not appearing until its final minutes. Her quiet and subtle revenge upon an ornery patient is thrilling in parallel with the smile that cracks across the young Misty’s face in the woods after supper.

What happens in the woods, after the crash, for this girl at the margins to occupy the center? Or is it rather that she exerts a power of the marginal over the center? After all, the one with the horns is more clearly signified to be the leader of the group, but that doesn’t always coincide with who’s really in charge.

Already I’m tempted to read something much more general into what Yellowjackets is presenting us with—something about an economy of power wholly outside the structures of phallogocentrism. Perhaps Hélène Cixous would be an interesting point of reference.

But I feel at risk of overdetermining an interpretation of these scenes when their power seems to lie so much in how they escape the sense we can make of things through words. This not logos, but more like the khôra before the world was made. We aren’t outside of the Social Contract and into a Hobbesian State of Nature but into… something else.

Something far more fascinating and harder to comprehend.

The trick will be for Yellowjackets to maintain this sense of mystery—to deepen it and make it all the more haunting, to continue to make our concepts flail while connecting to something visceral. At least I hope this is what the show is able to pull off.

The tripartite temporal structure of the pilot serves this aim well: we have the scenes in 2021, which I will call the present; those in 1996 in the past, before the crash; and then those glimpses into the meanwhile, which is of course also in 1996 but more meaningfully outside of normal time.

In 1996, we see the dynamics of the team in a state of normalcy. Jackie (Ella Purnell) is the captain, though she’s not the best player on the team. Coach Martinez (Carlos Sanz) tells her she’s the captain because of the influence she can exert, and we see that influence when she steps in to break up the fight between Shauna (Sophie Nélisse) and Taissa (Jasmin Savoy Brown) at the party, followed by her insistence that the girls all say nice things about one another to reestablish their solidarity.

Shauna is Jackie’s best friend, but that doesn’t stop her from having sex with Jeff (Jack DePew) and making him tell her he loves her (though she won’t hold him to it). It would perhaps be fairer to blame Jeff for cheating on his girlfriend than to blame Shauna, but we can’t miss the betrayal here on her part and the implication that she simply doesn’t value Jackie the way Jackie values her. The latter is picking out color palettes for their room together at Rutgers, while Shauna is planning to go to Brown.

Taissa wants to freeze Allie (Pearl Amanda Dickson) out during their match at Nationals because she is a weak link in the team, a suggestion Natalie (Sophie Thatcher) chafes at more than the others. Of course, it becomes irrelevant when Taissa slide tackles Allie during a scrimmage and breaks her leg a la Joe Theismann. I wonder what’s happened to Allie in the interim. Do you think she went to prom?

Taissa (Tawny Cypress) is running for State Senator in 2021, much to Shauna’s (Melanie Lynskey) chagrin, as they’d all agreed to keep a low profile lest anyone ever find out what really happened in the woods over those 19 months. When they meet in a diner, they talk about others besides Natalie, but it’s not clear who the others might be. Standard narrative logic would lead us to guess that they are the others we’ve gotten to know over the course of the pilot, but I’m fairly confident it won’t be all of them who’ve survived. Fingers crossed for Van (Liv Hewson).

Who is the girl running through the woods at the beginning of S1E1? Somehow I found myself wondering if she was some stranger who had happened upon the group, perhaps because of the bewilderment she expresses along with her fear. She doesn’t seem to know what’s going on as she runs through the snow.

That would not make much sense, however, and I did go back to this scene after watching the whole of Episode 1 in search of any clue. We don’t see her face, of course, but I wondered if she might be recognizable otherwise, and though there isn’t much to hang a definitive claim on, there is indeed a clue in a brief shot of a heart necklace after she falls into the trap.

Jackie gives a heart necklace to Shauna on the plane (along with some valium), but we know this isn’t Shauna. My guess is that it’s Jackie, and perhaps she had just awoken from a coma or something to discover that her soccer team had turned into a weird cult. But I don’t know, of course, and we might almost prefer to avoid such theorizing when it comes to Yellowjackets. The possibilities in our imaginations are more fun than speculations based on evidence.

The shot of the necklace exists, though.

Natalie (Juliette Lewis) in 2021 seems to be tracking down Misty, rifle in hand. She’s just gotten out of rehab, where she claimed to have rediscovered a sense of purpose. Whether she plans to kill Misty or not, I would guess that she’s going to be the catalyst for things getting increasingly messy for the surviving women trying to keep the past a secret.

It’s also worth noting that she says she lost her sense of purpose after they were rescued, which implies she felt she had a purpose in the woods, and so we might wonder which of the figures in masks she is. As far as playing soccer goes, Natalie felt like almost an outsider, or on the fringes of the group in a way that was absolutely realistic—I knew girls like this in high school in 1996, who played soccer but hung out with the “burnouts.” Does the ritual in the wilderness finally make her feel a proper part of the team?

And then there’s Jessica Roberts (Rekha Sharma) who says she’s a reporter for the Star Ledger, but Shauna can’t find her name in any bylines. So this is either a pseudonym and she’s hiding her real identity, or she’s hiding something else.

The mystery coming out of the premiere of Yellowjackets remains how we get from the plane crash to human sacrifice and cannibalism, with all of its concomitant ritual. This is what Jessica Roberts wants to know, whether she knows it or not.

Perhaps she doesn’t even know the broad strokes of what happened, beyond some whispers and rumors. But we do, and it only makes the question stronger and more pressing: how do these girls become this? And if we start to feel that it makes sense, doesn’t that make it all the more disturbing?