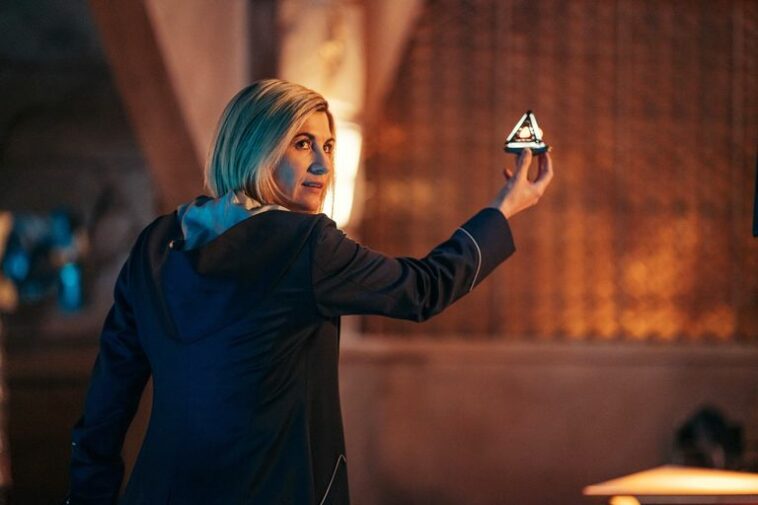 (The following contains spoilers for Doctor Who S13E3, “Once, Upon Time”, written by Chris Chibnall and directed by Azhur Saleem)

There have been certain segments of the Doctor Who fandom who seem unwilling and unable to accept anything that Chris Chibnall has done since he took over as showrunner. I have been trying desperately to avoid being seen as that sort of cantankerous “hater” type. The show has always had faults and, even with the flaws, the current iteration still has great moments and great episodes. The issue is that there are also some episodes like S13E3, “Once, Upon Time.” The overall narrative of Doctor Who: Flux has been taking a back seat so far in two relatively normal episodes.

But with S13E3 the big picture arcs start to take shape, and the entire story falls apart. Chibnall’s script seems to be nothing more than a mashup of random moments and character beats without a coherent shape. Despite being the focus of the entire episode there are no revelations or progressions in the story. The Doctor (Jodie Whittaker) remains confused and disconnected from her past and from the issues at hand. Yaz (Mandip Gill) is unhappy and unfulfilled but won’t do anything about it. Dan (John Bishop) is still just a working class bloke with a heart of gold. Vinder (Jacob Anderson) has had so little connection to the plot that the Doctor doesn’t even know who he is.

In a misguided attempt to correct that, Doctor Who S13E3 starts off introducing yet another new character to the already overcrowded crew. This new character, Bel (Thaddea Graham), gets several long introductory scenes showing her fighting for survival against classic Doctor Who villains like the Daleks and Cybermen. Bel is the type of character I usually tend to love, and that certain unsavory aspects of fandom automatically hate, a female, POC, badass. But the character falls flat here. Her motivations are obscured by Chibnall’s continued insistence on keeping the audience in the dark and the convoluted nature of the story.

Bel is running because the universe is falling apart due to the Flux. Unfortunately, exactly how and why this crisis is still ongoing is quite unclear. She winds up on a Lupari ship, in what seems like a decision motivated more to save the money it would have taken to build a different set. Eventually we learn that her “mission is love” and that she is searching all over the place for her lost love. Unsurprisingly, it turns out that Bel’s lover is Vinder and that she is carrying his unborn child. Which, considering the rest of the timeline, creates far more questions than it answers.

Also questionable is The Doctor’s solution to the cliffhanger at the end of “War of the Sontarans.” Which was to send herself, Dan, Yaz, and Vinder into the timestream. As a result of this, they are all sent back into their own timestreams which allows for all manner of ridiculousness. Half of the time is spent with the Doctor floating in a CGI vortex shouting at giant versions of the Mouri. The other half the time is dedicated to revealing elements of backstory from everyone’s past, but with the added unnecessary complication of everything flitting in and out of time and space.

At least going into the past finally gives the audience some time learning about the characters. Unfortunately, even those scenes are flat and expository. Yaz’s backstory is just a random collection of moments where she is hanging out and the Doctor takes over the body of her companions. There are some fun comedic turns and Mandip Gill and Whittaker continue to have a great vibe with each other, but nothing about the scenes taught us anything about the character. Yaz remains, as ever, dedicated but exasperated, but unwilling and unable to express her feelings to the Doctor. The only real advance in Yaz’s story happened with what we learned about Bel. At least the revelations about Bel and Vinder’s love and progeny have probably ended the speculation that Yaz and Vinder are going to be forced into being a couple.

In Vinder’s own backstory, it turns out that prior to his position overlooking the nebula where the Flux began, he was working as a security guard for the Grand Serpent (Craig Parkinson). The Serpent is the all too obviously evil President/Kingpin of Vinder’s home and Vinder was only assigned to his observational outpost as a punishment for crossing him. The scenes lacked real tension though, the Grand Serpent was one dimensionally evil and Vinder was not given any difficult moral dilemmas. There were no moments of surprise along the way, Vinder was moral and upright and done wrong.

There was a moment in S13E3 when the storyline could have gone in an interesting direction. When we see Vinder trying to become a whistleblower against the Grand Serpent he mentions that he doesn’t want to see it because he regrets his decision. The decision that would have made him more interesting would have been if he decided not to do the right thing. Instead, Vinder is uncomplicatedly heroic. He gets punished certainly, torn away from Bel and their unborn child, but there was something off in the way he reacted to his choice. It seems that Chibnall was trying to give him depth and a deep sense of regret, but it never worked.

Dan’s story on the other hand has some really strong moments. His connection with Diane (Nadia Albina) is sweet and their conversation on the stairs is the only moment in the episode with any real emotional heft. There is a real disarming charm to John Bishop’s performance. He infuses Dan with a sense of sadness and regret about his past that infuses every moment even when things are going well for him.

Albina matches him throughout the scene, they are palpably excited as they start walking together, but they both grow first more connected and then darker as the scene progresses. All that leads to her line, “But you never came.” Once it is delivered, Diane disappears and Dan is left in shock and confusion. The one scene is a great example of what Doctor Who can do when it is willing to invest time in its characters and allow the actors to perform rather than yell expositional dialogue.

Unfortunately, Chibnall’s script is filled to the brim with expository lines so over the top they may have doubled as stage direction. As the Doctor confronts the Mauri several of her lines are some variation of “oh no, I’m being pulled back into a different scene.” It is dialogue so stilted that even Jodie Whittaker’s boundless enthusiasm seemed taxed at times. S13E3 was filled with lines that felt like they would have been cut from a first year screenwriting student’s first draft of any script.

In the Doctor’s backstory, she spends half the time telling everyone that she has no idea what is happening and the other half the time trying to command the first invasion of the Temple of Atropos. In all of this, the Doctor’s companions are played by the regular cast, so it looks like Yaz, Dan, and Vinder are there as well. This also happens in Vinder’s memories, but not in Dan or Yaz’s. There is no explanation given as to what is happening or why this is happening, even though the fact of it is an explicit plot point in both threads.

After a long period of confusion and discussion The Doctor discovers that she is in a memory from her time as Jo Martin’s “Fugitive Doctor.” This leads to some great lines from Martin as she pushes Whittaker to action. Director Azhur Saleem makes some really interesting choices as the Doctor confronts and comforts herself through the different incarnations. Several times the sound and visuals overlay the two performances over each other. Martin’s powerful presence and Whittaker’s manic jitteriness together creating a layered and unique new personae. The return of Martin’s Doctor is welcome, though in the end her appearance doesn’t lead to new knowledge or revelations. Everything is just a mystery designed to lead to another mystery, signifying nothing.

The biggest question left is whether there is any way the show can get out of its current spiral. Unfortunately, there does not seem to be much hope for that. Chibnall’s weaknesses might have been tempered by the addition of some additional writers, or with a story less dependent on the ability to tie together big ideas in a grand and interesting way. The show seems to be floundering, both in the storytelling and in the ratings. There is still time for this short interconnected season to work things out and be a great sendoff for Whittaker’s Doctor, but standing in the middle that seems quite unlikely.