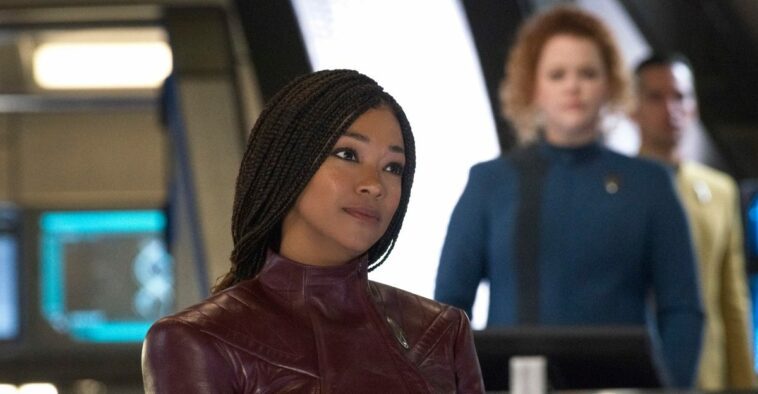 When Star Trek: Discovery debuted much of the buzz around the show, and also a large percentage of the criticism of it, was centered around its place in the timeline. By setting the show between Enterprise and The Original Series it seemed they had both hemmed themselves in, and left every decision they made about updating the look and feel of the series an ordeal. It seemed at times that Alex Kurtzman and Bryan Fuller had chosen the setting simply to make Michael Burnham (Sonequa Martin-Green) have a—previously unmentioned in the universe—connection to Spock.

By Season 2, it was already clear that Discovery was much more than just a prelude to Kirk and Spock’s adventures. (Though it did serve as a great delivery system for the prequel that everyone actually wanted.) They had set out on their own path, but they were still constrained by the timeline. Then Season 3 sent Discovery far into the future and freed the show from those constraints too, but it created new ones. By introducing “the burn” the writers essentially wiped out the Federation, and it was a melancholy time. The crew had to adjust to their time in the future, the loss of everyone they loved except each other. Thematically it gave the show rich depth, but it also meant that the action continued to take up a vast majority of the time.

Now though, with the Federation and Starfleet back fully operational, Discovery is truly free. The writers and creative team have “no strings attached” any longer. But they also have the benefit of the Discovery having been a part of the past, with the Federation just about to hit its highest points. Each of the crew members brings unique gifts to this new work, but collectively they bring an optimism that the citizens of the broken future don’t have. The Discovery crew knows that the Federation can grow and become great again because they grew up in it. They supply their new present with the wonders of connections to past heroes, the knowledge of what was, and the hope for what can be.

The show rests on the talents of Sonequa Martin-Green, and it is rarely better than when Burnham is having fun and trusting her crew to get them out of danger. Martin-Green and Ajala have tremendous chemistry, and seeing them succeed in an old school “diplomatic mission gone wrong” was a great way to set the stage for the new season. Each of the main characters got to have a spotlight moment. Martin-Green and Ajala have the action comedy on the planet. Tilly (Mary Wiseman) gets to take charge on the bridge. Stamets (Anthony Rapp) and Adira (Blue del Barrio) solve the issues in engineering. The idea that the crew working together can do almost anything is a huge theme of Star Trek: Discovery S4E1, but it is one the show can always do best to remember applies to the cast as well.

Connection is a huge part of the entire moment, which makes it feel like there is something special about “Kobayashi Maru”. Burnham is finally the Captain and together romantically with Book. Book and the entire Kweijan race are interconnected empaths, so everything he does ties to the theme. The rest of the crew are all working together, and thriving. Even Saru (Doug Jones), who went back to Kaminar at the of “That Hope Is You, Part 2” is part of the theme, as his absence is felt and acknowledged, both on the ship and by his actions. Saru may not be present physically, but his thoughts and actions are still tied to everyone on Discovery.

The Federation being back also means that the classic Star Trek trope of “the authoritarian bureaucrat constantly trying to block the Captain’s moves” can be re-introduced. S4E1 does that by bringing in the new Federation President, Laira Rillak (Chelah Horsdal), to be the thorn in Burnham’s side. Rillak definitely has the look for the part—she immediately has a commanding presence and it is clear that she will be a force to be reckoned with, even for Burnham.

But, at least so far, Rillak has not been subjected to the usual storyline. When the Discovery gets pulled into action to rescue the crew of a Space Station in peril, Rillak demands to go along, but doesn’t interfere. Burham thinks the President is there to cause problems, but Rillak refuses (at least so far) to play any part in it. Rillak is actually on the ship to observe and monitor Burnham.

Horsdal plays the President with supreme confidence, but also with a real ability to connect to other characters. While Burnham thinks she is on the ship to “tick the box” of getting battle action to help her career, it turns out that she is both a quick study and canny operator. Once in the heat of the crisis, Rillak is the one to calm down the station’s Commander, Nalas, and it is Rillak who calls out Burnham for endangering the crew. Burnham insists on saving everyone, and the pure determination is played with great skill by Martin-Green—for Burnham, failure is just not an option. In her mind, everyone needs to be saved.

But Rillak pulls back the curtain on Burnham. Her obsessions are dangerous, and since she makes every decision a win or lose everything proposition, it makes her too dangerous to promote. As I have noted previously, and then noted again, and again, as much as she has succeeded and risen in the ranks, Burnham is reckless. Her unwillingness to compromise puts her alongside the great Starfleet Captains, but the personal recklessness that those captains can display is also their undoing.

The “Kobayashi Maru” is the unwinnable situation that is used to test Starfleet commanders (and that Kirk famously cheated, because he, like Burnham, refused to accept a no-win situation). That test is supposed to teach people to to accept that not every outcome can be won, but Burnham’s response is telling. She did not learn anything from the test—she thinks it is a cheat, an impossibility. Rillack is canny enough to figure all of this out from one mission and reading Burnham’s logs. President Rillack’s motivations may still be unclear, but her response is valid. Death is not an impossibility, it is inevitable.

The Discovery crew has new uniforms, that seem much more akin to the old Star Trek style, even if they are asymmetrical, which help them stand out. But, the script also allows for their personalities to shine through. Previous Star Trek series, with the old network seasons of 25 or 26 episodes, could spend entire episodes focusing on crew members. Discovery, due to the much shorter seasons, has very little time to devote to that. There are also quite a few major characters on the show, limiting the amount of time that can be spent with anyone else. The show has, especially in the past season, given a lot of focus to Saru, Tilly, Stamets, Culber (Wilson Cruz), and Adira.

The rest of the crew began the series as afterthoughts and it was even difficult to remember their names. But now, Detmer (Emily Coutts), Owo (Oyin Oladejo), Reece (Patrick Kwok-Choon) and Brice (Ronnie Rowe Jr.), have finally had enough time to feel like valued parts of the whole. They still don’t get much time or focus. Though when they do get attention, like Detmer’s arc in Season 3, they are amazing. Instead they usually get one or two fun interactions and moments to express shared history between them. In Star Trek: Discovery S4E1 it was Detmer and Owo competing against each other as they try to match the spin of the Space Station. The two of them smiling at each other while at the helm was among my favorite moments of an altogether spectacular season premiere.

Saru (Doug Jones) remains one of the most nuanced and interesting characters in the Star Trek universe. He has grown from frightened, yet efficient, first officer to Captain, and now to Elder. Jones brings a gravitas and sense of connection to the performance that is captivating. And unfortunately, it is a skill that Bill Irwin as Su’Kal and most of the other actors playing Kaminarians lack. Jones makes Saru someone the audience can not only relate to and empathize with, he makes Saru the type of aspirational mentor figure that it feels impossible to imagine the show, or the ship, without. So it is clear that he will be heeding Su’Kal’s advice and returning to Starfleet soon.

Star Trek: Discovery S4E1 also spent several scenes allowing Book to go home and connect with his family. This involved a lot of root touching and slow motion running through the golden light by Book’s little nephew, so it seemed inevitable that tragedy would strike. And it did. The gravitational distortion that hit the Space Station hit the planet and Book only barely escaped back to the Discovery. Unfortunately, the planet was not so lucky. The last shot of the episode is of Book, David Ajala’s face covered with tears, looking out at the destruction of Kwejian, and likely signaling the start of the season long conflict for Star Trek: Discovery.