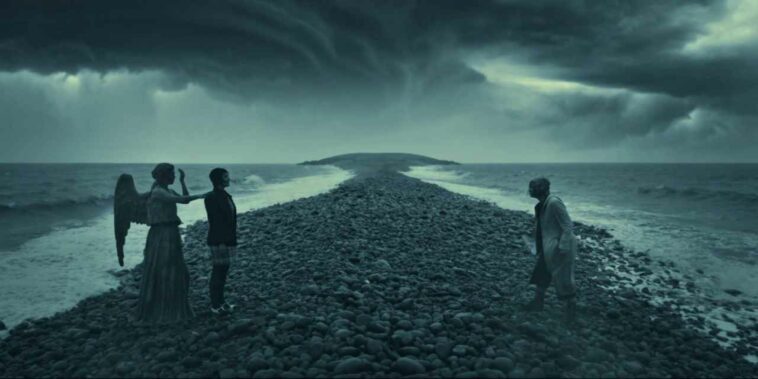 The following contains spoilers for Doctor Who S13E4, “Village of the Angels” (written by Chris Chibnall & Maxine Alderton and directed by Jamie Magnus Stone)

As the credits rolled at the start of  “Village of the Angels” there was one that was most welcome: “Written by Chris Chibnall and Maxine Alderton.” Chibnall has written every episode of the season so far, and the quality of the show has suffered for it. All of the better episodes during his run as showrunner have been written by people other than Chibnall himself, and Alderton wrote one of those better ones, last season’s “The Haunting of Villa Diodati”.

Alderton was the perfect choice to write an atmospheric semi-historical tale with supernatural elements. Her story was able to both advance a plot and also do things like character development and completing story arcs which are basic elements of storytelling that the show has lacked of late. With Alderton’s input on the main story of the the cursed village and Chibnall seemingly focusing on the parts with Bel (Thaddea Graham), Doctor Who S13E4,“Village of the Angels” did not disappoint and, especially after the low of last week, was easily the highpoint of the Doctor Who: Flux season.

It is the way that all of the elements come together as a cohesive story that makes Doctor Who S13E4 so strong. The main plotlines focus on two poor unfortunate souls whose lives have been uprooted, Claire (Anabel Scholey) who we last saw get taken by Weeping Angels in the season premiere, and 10 year old Peggy (Poppy Polivnicki). Each of them are surrounded by characters who get real moments to show their worth, or lack of it.

All of these characters have more development and backstory than any side characters we have met so far this season (including Josh Anderson’s as Vinder). Each of them is given both an important plot element to move forward and an actual motivation to do what they do. It seems odd to be praising such characters as Gerald and Jean (Vincent Brimble and Jemma Churchill) who may be “one dimensional, somewhat abusive, unwilling guardians of a child” but since the series has so often failed to produce characters even that nuanced, it seems important to note that they finally did a good job with some.

The Doctor (Jodie Whittaker) spends the episode with Claire and a professor monitoring her pyschic abilities, Eustacius Jericho (Kevin McNally). Claire is headstrong and determined, but is also fully aware that something is wrong. Early in Doctor Who S13E4, she is looking at herself in a mirror and sprouts angel wings and later she rubs dust from her eye. Usually, a character in that predicament would wait until too late to reveal she is having issues, and the story would suffer for it. But Claire Brown is not that way, as soon as the Doctor makes it clear that the angels can come into being from mere images, Claire comes clean. Which leads the Doctor to go into her mind and discover the secrets that Claire has been carrying. While that is going on, Jericho is left on watch to protect them and prove himself.

Instead of being a tossed aside piece of fodder for some jokes about stuffy old Englishmen, as it seemed at first that he would be, and like Gerald ultimately was, Professor Jericho is far more interesting. As the Doctor says during one of Whittaker’s patented whirlwind rants, Jericho is a true scientist, devoted to learning about the mysteries of the world and uncovering them, not running from them. He then gets to demonstrate this throughout the episode, at turns being heroic and willing to sacrifice himself for the good of the others.

When the Angels come for them all, he does not cower or shove aside the Doctor’s orders. He stands at attention, salutes, and asks for his marching orders. It was lovely to see him make it through this episode and I hope that he and Peggy, who adorably hugs him on his arrival in 1901, will be able to live out the “long way round” in peace and happiness once this is all over for them.

Yaz (Mandip Gill) and Dan (John Bishop) are separated from the Doctor early in the story. Far from sidelining them, which so often happened with Yaz and Ryan (Tosin Cole) in the last couple seasons, the separation frees them from reliance on the Doctor, allowing them to show their own skills and compassion. Yaz takes command when the Doctor wanders off, in a really commanding display of her skills as a police officer and her ongoing “mimicking the Doctor” character thread, questioning Gerald and Jean about Peggy’s disappearance and the frankly miserable job the town is doing searching for her.

Yaz and Dan are ultimately caught by the Angels and sent back to 1901, where they do find Peggy. As they navigate the loss and try to understand what is happening, they are both acutely aware of their own loss and the fact that they need to keep Peggy safe. Throughout the story there are several moments that really enlighten who they are and highlight the deep sense of loss and disconnection they are feeling.

Really rounding things into shape is the fact that the village itself is creepy and compelling. The production design is fantastic, the 1960s setting of the village feels exactly as if it were out of an episode of Doctor Who actually filmed in 1967. Then when the story shifts back to 1901 in the same village, the redesigned sets have the amazing ability to still feel out of time. All of the props, costumes, and set decorations just have the right feel to them and it makes the story much better and more believable as a result. And all of it is tied together by having the Weeping Angels as the antagonists.

The Weeping Angels are perhaps the most iconic villain introduced since the show’s revival in 2005. Even though their method of murder has changed significantly from story to story, there remains an unhinged factor to their very design that can create chills upon seeing them. “Village of the Angels” uses them in the best possible way, at least until the end, by emphasizing their stillness. (As an Angel says while taunting Professor Jericho, “We are patient. We have time on our side.”) The threat being unmoving and mostly silent makes it all the more ominous. As the numbers compound and more and more Angels descend upon the Doctor, Claire, Jericho as they try to escape the professor’s house, the stakes actually seem to matter. Which is unfortunately rare in Doctor Who.

The Rogue Angel is also a great way to tie together the events of Doctor Who S13E4 with the overall season story. The Angel is trapped inside Claire, somehow, but it turns out that it is the Doctor whom the Angel wants to trap. Both the Angel and the Doctor once worked for “the Division” but they are now both on the outs with that organization of secret ops Time Lords. This ties together both the lost memories involving the Fugitive Doctor (Jo Martin) that the Doctor so desperate wants to have back and the disappearing universe itself. In the end, the Doctor thinks she has outlasted the Angels and saved the day, only to discover that the entire setup was nothing more than a trap. Whittaker plays the pain on the Doctor’s face amazingly as she is caught in a “Quantum Extraction” and turned into a stone angel with Yaz, Dan, Jericho, and Peggy looking on.

The story with Bel (Thaddea Graham), while completely separate from the rest of the plot, is also better this week. Her search for Vinder (Jacob Anderson) had been the only motivation we had seen from her and it threatened to make the character incredibly one dimensional. But this week her search wound up leading her directly to Azure (Rochenda Sandall) as she tricks what’s left of the life in the universe into becoming her prisoner inside of a Passenger form. Bel, instead of immediately attacking or continuing to pine for Vinder, actually saves her unwilling guide, Namaca (Blake Harrison). Then she immediately sets out in search of Azure in an attempt to put things right. My comments last week about Vinder notwithstanding, it is usually nice to see our heroes attempt to be heroic.

Vinder is only in the mid-credits scene, which means we don’t get much time with him. But that scene is the best acting by Anderson on the show so far. His emotions veer from joy, to sadness, to resolve in mere seconds. Allowing him to see Bel’s face, even in a hologram, also lets us connect better with both of them. Even the last moment, with Bel’s message being cut off by the convenience of plot necessity, deepened the understanding we can have of both characters.

Doctor Who S13E4, “Village of the Angels” was full of great, quiet moments. And with the Weeping Angels, and it seems the Division, actually capturing the Doctor, it seems like the stage is set for the last two episodes of the season to offer up actual answers. Unfortunately, Chibnall will be back to writing them by himself, so I’m not all that hopeful that those answers will be forthcoming.