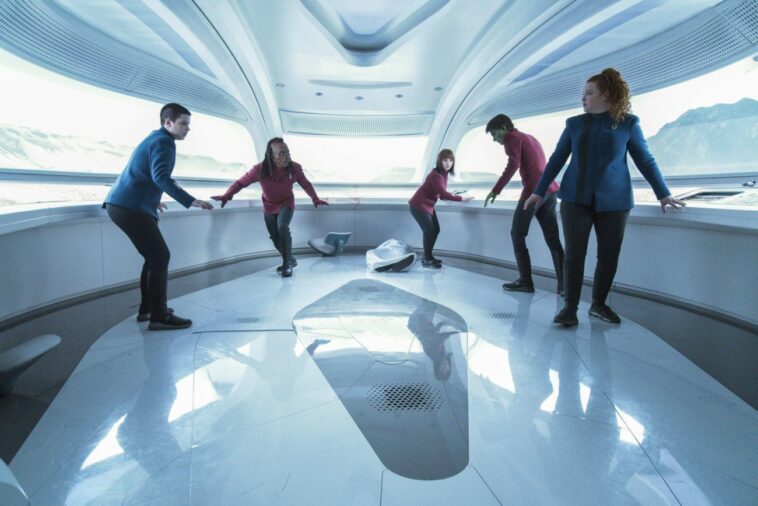 “All Is Possible,” the latest episode of Star Trek: Discovery, brings a long-lost world back into the Federation while possibly depicting the departure of a beloved character. Things are all in a holding pattern—the Discovery is still in orbit around Ni’Var, Book (David Ajala) is still processing his grief over the destruction of Kwejian, and Commander Stamets (Anthony Rapp) is still still working on the anomaly issue and is nowhere near a solution. With things in a holding pattern, Discovery takes some time to take on some classically Star Trek side quests.

In the main plot, Captain Burnham (Sonequa Martin-Green) and Mr. Saru (Doug Jones) are enlisted by Federation President Rillak (Chelah Horsdal) to attend the final meeting designed to welcome Ni’Var back into the Federation. This has been well set up as a major moment for the show.  Ni’Var’s exit from the Federation in the time after the burn has been set up as one of the defining symbols of the Federation’s decay. President Rillak is well aware of this and Horsdal is great at portraying the President’s concern and power throughout the negotiations. Unfortunately, Ni’Varan President T’Rina (Tara Rosling) tells the assembly that the planet will only rejoin the federation if they have the ability to leave unconditionally.

Burnham and Saru, as is their usual style, ignore Rillak’s order not to get involved and immediately set about trying to fix the issue. Burnham works out pretty quickly that Rillak actually brought them to the meeting in order to figure out a way to fix the problem. Rillak and T’Rina are both great characters, nuanced and complicated but also fun and powerful. I continue to worry that Rillak in particular is going to have a “heel turn” at some point, while it is much more interesting if she remains a grey but well meaning powerful woman.

It is clear that Burnham hates Rillak’s obfuscation and politics but it is also clear that Rillak is very good at politics and everything she has done so far seems to have worked out for the good of the Federation. She may be doing it for her own ends but whatever her reasons she is really making things happen and those things have, so far, all been pretty amazing. Horsdal portrays Rillak as a mastermind who plays her cards close to her chest, which also frustrates the heart on her sleeve Burnham even more. The two are great at playing off of each other and I hope they continue to work together for the rest of the show.

Mr. Saru and President T’Rina have a very different, but equally compelling, relationship building. T’Rina and Saru share tea, meditation, and flirty looks throughout “All Is Possible,” which makes it seem very likely that the two have a budding romance in the cards. Star Trek has a great history of unlikely pairings, but this one between the incredible Kaminarian and the venerable Vulcan has the potential to be one of the most interesting. Interspecies relationships in Trek have always been a part of the story, but it seems to be particularly relevant in this far future allegory about finding ourselves and coming together.

Dr. Culber (Wilson Cruz) continues his run as a central figure in Star Trek: Discovery S4E4, first sending Lieutenant Tilly (Mary Wiseman) on her adventure and then spending the rest of his time in his continuing effort to work Book through his grief. Cruz and Ajala have been the emotional hearts of the show all season and it was incredible to watch them work off of each other throughout the episode. Despite T’Rina’s mindmeld in “Anomaly,” Book is still deeply troubled. Culber’s therapy, which is based on a practice from Kwejian, is both incredibly intense and very difficult for Book to perform. As the scenes progress Book gets more and more angry and Ajala’s performance gains an intensity that we rarely see from him on the show.

Culber matches him with patience and understanding, but never stops pushing. Interestingly, Culber starts to use the sessions to reveal some of his own troubles and hints at a far darker path for the character to explore over the rest of the season. We have not seen much fallout from Culber’s death in a couple seasons as once they moved to the future the stories involving Culber and Stamets have had more to do with Stamets’ insecurities or their budding family with Adira (Blu del Barrio). It would be great to see the renewed focus on Culber lead to a storyline that deepens his character even more and give the fantastic Cruz an even greater bit of material to mine.

Tilly continues to be lost as well and at, Culber’s suggestion, she and Adira leave the ship for a training mission of Academy cadets at Starfleet Headquarters. The mysterious Dr. Kovich (David Kronenberg) whom we last saw leading the magnificent Phillipa Georgiou (Michelle Yeoh) back to the past, is overseeing the mission and it seems his mere presence should be taken as an ominous sign for any cast member who wants to remain on the Discovery, as he once again leads to a character’s departure.

Tilly is assigned to lead a shuttle of cadets on a mission, which of course goes horribly wrong. The entire story is an intentional homage to the Star Trek: The Original Series episode “Galileo Seven”. Though, thankfully, only one member of the shuttle crew winds up dying this time. (I remained convinced throughout “All Is Possible” that the entire ordeal was just a training mission, but apparently that was wishful thinking.) The cadets, including Adira who is intentionally assigned a cadet role to try to help her come out of her shell, are terrible at communicating with each other and show just how broken and distrusting different species have become in the years after the burn.

The life or death situations and Tilly’s leadership eventually lead them all to learn to work together and trust each other, though I felt some of the characterization and backstory of the cadets was lacking. They were supposed to be annoying until they learned to embrace Starfleet ideals, and that was what happened, but I would have preferred all of them to be a bit more nuanced. As it was, Tilly was able to drive them to be their best and finally they were able to escape and get back to headquarters having learned the simple lesson that people are different, but not all differences are bad.

Kovich approaches Tilly and offers her a position teaching at Starfleet. This role actually makes perfect sense for the brilliant and affable Tilly. She has never been enamored with leadership and it always seemed out of place that they were forcing her to become a Commander or Captain. Also, Kovich actually makes the explicit point that I think is the best thing about Discovery’s run. The time-jump has brought this crew from the very height of the idealism of the Federation into a dark future where their optimism can serve as a beacon of light. This makes everything on the show feel more satisfying than its original incarnation as a dark show in the time of the Federation’s growth. There is something fulfilling and satisfying in being a part of something special, and the pitch is obviously a good one for Tilly who goes back to the Discovery lost in thought.

I thought this would be a running thing for Tilly to consider for the rest of the season, but she goes straight to Captain Burnham and resigns her post to take the job. Martin-Green and Wiseman have been great together from the first episode of the show and seeing them back in their once-shared quarters, with a smiling photo of them both from Season 1 on display, as they reminisce fondly before Tilly leaves, was an emotionally satisfying moment.

The abrupt nature of Tilly’s departure seems really strange though—this anomaly they are studying is a huge thing and I would have expected the character to want to help solve it. Also, Saru left at the end of Season 3 only to immediately return, which undercuts the emotional impact of the departure. If Tilly, and Wiseman, are really leaving the show that will be a giant hole that they may not be able to fill, but even if she doesn’t this departure was both beautiful and strange.

It seems likely that the rest of the season will really start to focus more on the anomaly and probably have a lot more action and destruction, but I must say I have loved the quieter reflective nature of “Choose to Live” and “All Is Possible” and hope they continue to show us more of this side of the show as well.