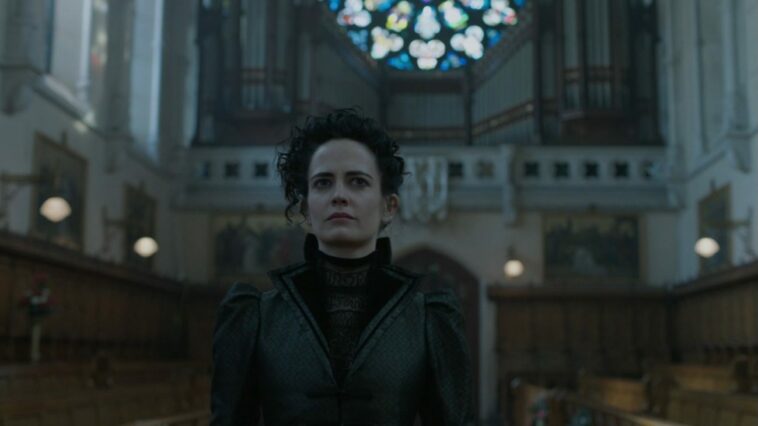 Beyond the great seasons and episodes of TV, sometimes a single scene sticks in the mind. In this article series, we’ll be looking at such scenes, how they are crafted to inform the show around them, and what makes them indelible. This week, Daniel Siuba looks at a scene from the end of the first season of Penny Dreadful, focusing on the character of Vanessa Ives.

The first time I wrote about Penny Dreadful, I discussed my mixed of feelings about the series finale and my overall disappointment in third season. But I did mention that, for me, the first season is nearly perfect from start to finish. It’s well-paced, the characters are well-developed and intriguing (as are their relationships), and the world of Victorian London is stark, cold, mysterious, and charming. Before I watched Penny Dreadful, I hadn’t enjoyed a dramatic series, supernatural or otherwise, in quite a long time, and after I finished the pilot episode I was immediately hooked. Although I have mixed feelings about the subsequent seasons, I have watched the first season numerous times. That being said, there is one conversation in the first season that is my favorite in the entire series. It takes place at the end of the Season 1 finale, in the episode “Grand Guignol.”

At this point in the story, Sir Malcolm (Timothy Dalton), Vanessa Ives (Eva Green), and Sembene (Danny Sapani) have been working with Ethan Chandler (Josh Hartnett) and Victor Frankenstein (Harry Treadaway) to discern the whereabouts of Sir Malcom’s daughter, Mina (Olivia Llewellyn), who was captured by a vampire. In a dream, Vanessa discovers that Mina is being held captive in the Grand Guignol theater. After the main cast ventures to the theater, they slaughter (and are almost slaughtered by) many vampires, including the one who captured Mina. Ultimately, they realize Mina cannot be saved—she has become a full-fledged vampire, and Sir Malcolm is forced to kill her.

The first portion of this episode is dramatic, exciting, and thoroughly entertaining, but the end of this episode catches me by surprise every time I watch it. The scene takes place immediately after a brief montage depicting individual members of the main cast as they grapple with the aftermath of the previous night’s events. In the final minutes of the episode, the story turns to Vanessa, who enters a church. A group of choir children sings “O Come, O Come, Emmanuel” as Vanessa approaches a priest (Henry Goodman), who is never named. She asks to speak with him in private and they walk to his office, which is where the scene begins.

After briefly exchanging a few pleasantries, their conversation takes a dark turn.

Priest: What do you fear, girl?

Vanessa: Those things of which I am capable. Of which I have proven myself capable.

Priest: Are they really so monstrous?

Vanessa: Do you believe a soul can be taken over by another? That you can lose yourself to something dark?

Priest: I believe in the devil, if that’s what you mean.

Priest: I believe more in sickness that can be treated.

Vanessa: But when the treatments fail. When science fails. What is there then?

The priest becomes visibly shaken. He cannot maintain his priestly posture and says,

Priest: You know, back in Wales, where I’m from, there was a boy who was ill. The parish decided upon the rite of exorcism. They did not seek approval from Rome. It was, uh, well, a community event, you might say. And I was asked to assist. To help that poor boy.

Priest: He died. They all died.

Vanessa: Did he find God?

Priest: No. No one did. Before we continue our conversation, my dear, there is one thing you must understand. Even if it can be verified, this is a long, grueling, and dangerous thing you ask. It could take months, or years, or always, or never. But before we say another word, you must look into your heart and you must answer me a question. Just one. If you have been touched by the demon, it’s like being touched by the backhand of God. Makes you sacred in a way, doesn’t it? Makes you unique, with a kind of glory. The glory of suffering, even. Now, here’s my question. Do you really want to be normal?

His question is met with complete silence. Vanessa is unable to speak. She looks down, away from him; she looks up and takes a shallow breath. She stares. She parts her lips as if to speak, but freezes again; then, almost imperceptibly, she exhales.

The episode ends here, and with the continuation of the series, we can assume that, regardless of what Vanessa said, she was not ready to let go of her glorious suffering or her sacred connection with the “back hand of God.” After watching this scene a few times, I realized that this moment recontextualizes Vanessa’s entire narrative in the first season. On first viewing her story, Vanessa is a deeply private, haunted, conflicted, and tortured figure. But after the conversation with the priest, we learn a dark truth about Vanessa: she does not really want to change. She is unwilling to let go of her connection to the demonic side of the divine, which is essentially what propels the series into the following two seasons. This conversation is even relevant in terms of Vanessa’s death in the series finale, because in the end, she, like Mina, was too far gone to be saved. She could not come back to herself and could only be redeemed by a merciful death.

This scene profoundly affected me as a viewer because I felt Vanessa’s implicit reply to the priest was simply, “No. I don’t want to be normal.” And so, the story continued. Psychologically, it’s like someone who is attached or even enamored with their victimhood, trauma, abusive relationship, or addiction. The intensity of the suffering can be so powerful that you feel special, unique, even divine; yet, if you want to heal you have to let it all go and become “normal.” The narcissistic specialness and the dramatic narrative of victimhood must be confronted and relinquished, but the person must do this of their own accord; it cannot be forced from the outside, which is essentially depicted in S1E7, “Possession.” The episode follows Sir Malcom, Sembene, Ethan, and Victor as they try to save Vanessa from the demon wreaking havoc on her body and mind. They obviously love Vanessa, but when I watch this episode now, it’s like watching a codependent family try to save their loved one from an addiction—it just can’t be done. If a person does not want to change, they will not change, and the more the codependent family tries to intervene, the more warped and damaged they become in the process.

But in contrast to Sir Malcom and Co.’s repeated attempts to rescue Vanessa, the priest takes a different approach. Instead of identifying with her victimhood and taking on a savior attitude, he asks a simple yet incisive question: “Do you really want to be normal?” His question forces Vanessa to look at herself and what she sees takes her breath—and her voice—away. In a practical sense, this response was necessary in order for the series to continue in the way that it did, but I am always struck by the power of this exchange. Both actors are highly skilled and play the scene so well. Even though this is Henry Goodman’s sole appearance in Penny Dreadful, he leaves a deep and lasting impression. Every word is so carefully uttered and measured, and his emotions, which his character attempts to contain like any good counselor, ooze through him. The haunting memories of an entire village decimated by a demonic possession still linger in his bones, and when faced with a possible repetition of this experience, he uses all his might to ask a single question that, quite possibly, saves his life.

More From: On the Scene