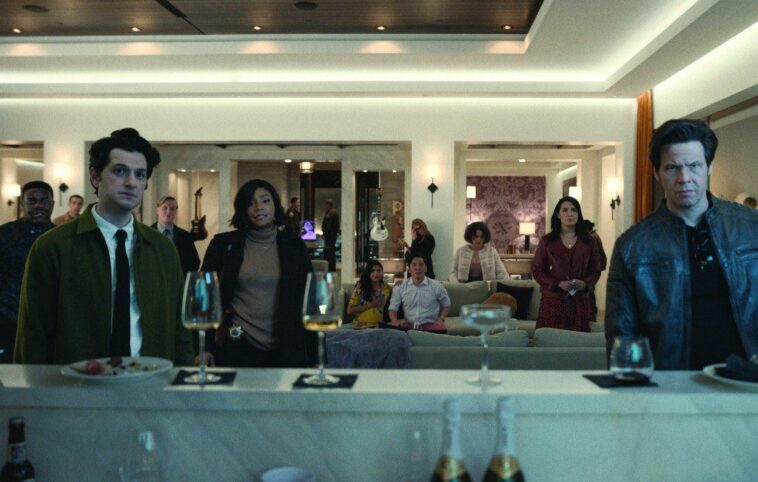 Apple TV+’s new murder-mystery comedy, The Afterparty, is wildly uneven but nonetheless gives a fun insight into how different people see themselves and their roles in life. Phil Lord and Christopher Miller have a unique comedic sensibility and they really bring it to the series. Christopher Miller is the guiding hand, directing all of the episodes and serving as the main creative force behind the ideas. In the best moments, The Afterparty feels like a great send-up of the movie genres that it is parodying, but in the worse moments, it feels like the same rote rehash of comedic tropes we see all the time. Especially coming off the success of the visually inventive, creatively superior, Only Murders in the Building, The Afterparty often feels like it is trying too hard to be special.

The core conceit, that there is a murder and all of the suspects have to tell their versions of what happened to the detective on the case, Detective Danner (Tiffany Haddish), allows the show to do fun homages and focus on different characters, but also feels limiting even after only three episodes. It may have been what drew me in to start with, but if the show sticks with the Rashomon bit for the entire run then it will be doing the characters a disservice by denying them the opportunity to develop and grow in service of the gimmick.

Haddish’s performance as Danner is a delight though, her gleeful line delivery is the highlight of every scene and her at turns profoundly intelligent and incredibly dense Detective helps to keep the more expository and perfunctory framing device scenes where she does the interrogations from feeling like a slog. Each of the first three episodes does a great job of delivering on the premise, as each is delightful in its own right while really giving a fantastic insight into how the type of story being told and the character at the center of that story can change everything around it.

It is fitting that the first episode centers around Aniq (Sam Richardson) as he seems set up to be the central character of the series. Aniq is nerdy and a bit bumbling but Richardson plays great notes that make him feel different from similar types of characters. Richardson is also one of the most intriguing actors in the series, he was a standout on VEEP and while he tones down a lot of the specific characteristics, there is still a Richard Splett-like appeal to Aniq.

About half of “Aniq” is dedicated to setting the stage, starting with the murder of Xavier (Dave Franco) and Detective Danner arriving on the scene. The first glimpse we get of the “Rashomon effect” version of the show is a really fun little detour through Indigo’s (Genevieve Angelson) perspective. Indigo’s extreme oddness and stilted wording are rendered as a Goddardian black and white arthouse film (that Danner hilariously cannot stand or comprehend). Her rendition is only about a minute long but gives a pretty perfect encapsulation of her style and how she sees the world. And also points the blame for the murder squarely at Aniq. It’s only once Aniq and Danner are alone for his interrogation that we shift into Aniq’s actual perspective on the events of the night and into a romantic comedy.

In his version of the story, Aniq is the quintessential neurotic romantic while Zoe (Zoe Chao) is his dream girl. Their reunion at the reunion, complete with a Breakfast Club homage scene in the teacher’s lounge, is sweet and fun but doesn’t tell us much about the characters that we didn’t already know. Then later, as Aniq gets drunk and drugged as he heads to the afterparty, the tone shifts to The Hangover, which is funny enough, but certainly is not my preferred style of humor or storytelling, and my own enjoyment of The Afterparty took a steep hit as it leaned into the humor. Aniq is a great character at the center of the show though, and I love having Richardson as the romantic lead of the show as opposed to someone like Brett.

Which is what made S1E2 so much fun. By focusing on Brett (Ike Barinholtz) immediately after Aniq, we get to see the same romantic tale from the perspective of the character who was the unquestioned villain the first time around. While Aniq sees Brett as nothing but a scary, antagonistic, threat—violent, and almost unredeemable—Brett sees himself as the hard but loveable hero of an action movie. Bruce Willis and Harrison Ford all rolled into one.

Brett was, of course, a much more nuanced character than we were led to believe. In his version of the story, he is merely trying to stop the evil Xavier from taking advantage of Zoe in a stoic, noble, way. He also spends most of “Brett” taking care of their adorable daughter Maggie (Everly Carganilla) which is probably the most classic way to humanize the trope.

Despite some fun over-the-top car chase scenes and a fistfight with a security guard, Brett remains pretty scary at moments in the episode. He may engage in dumb banter with Xavier, think of Aniq as “smooth down there”, and see himself as a hero who only wants to get back his daughter’s stuffed Koala, but there is underlying darkness and violence to him that seems to be seeping through even his sanitized version of himself. I think that some of that may be me reading things onto the character though, especially the idea that someone who would idolize this type of “hero” is a bit too likely to think Tyler Durden was actually a good guy.

Throughout the first two episodes of The Afterparty, Ben Schwartz was the absolute highlight so it only stood to reason that his spotlight episode would be the funniest of the three, and it delivered. While “Aniq” and “Brett” had their moments, ultimately both episodes relied a little too heavily on the format and the parody for their jokes to land. With “Jasper” the musical format delivered (though yes, I am and will always be the target audience for musical episodes), but beyond that, the actual jokes and situations were just inherently funnier throughout.

Schwartz has been stealing scenes at least since his Jean Ralphio days on Parks & Recreation and he doesn’t stop doing so here, even with the greater spotlight. Jasper fits right into the clueless, endlessly positive, but ultimately decent groove that Schwartz has basically perfected. And his songs are legitimate bangers.

The Afterparty S1E3 would only have worked as a musical because Jasper is the type of character who obviously always has a soundtrack to every moment playing in his head. When Schwartz and Richardson bust into rap on their arrival at the reunion it seems like the most realistic rendition of the scene because it just feels like this guy absolutely would have done exactly that. The songs are the only way to get to the heart of the character too. Later, after Xavier casually says, “Yeah sure, whatever,” in response to Jasper’s pleas that the star “bless his track,” the song that follows encapsulates everything that makes the format so fun.

Jasper turns the words into an anthem and gets all of the other classmates to join in his singing-dancing misinterpretation of their meaning. But, as so often happens in that type of song the façade starts to fall apart in the middle (Crazy Ex-Girlfriend was perfect at this type of mid-song tonal shift). By the end of the song, Jasper is left only with the words, but hilariously still pushes forward, as oblivious as ever.

“Jasper” was great, but it also seems that the show just may not have enough juice to get through the entire season with the format. For all the fun and innovation, and great characters in Jasper, Detective Danner, and Aniq, it seems that some others have been undervalued. In particular, Zoe and the Jennifer #1 (the always amazing Tiya Sircar) have felt almost entirely like background characters. I hope as we move forward that we actually get more focus on Zoe as so far she has just been the “woman” around whom both Aniq and Brett’s stories revolve, without allowing us to get an insight into who she actually is. The Afterparty as a whole feels much the same way, more a vessel for other ideas than a story we are meeting on its own merits.