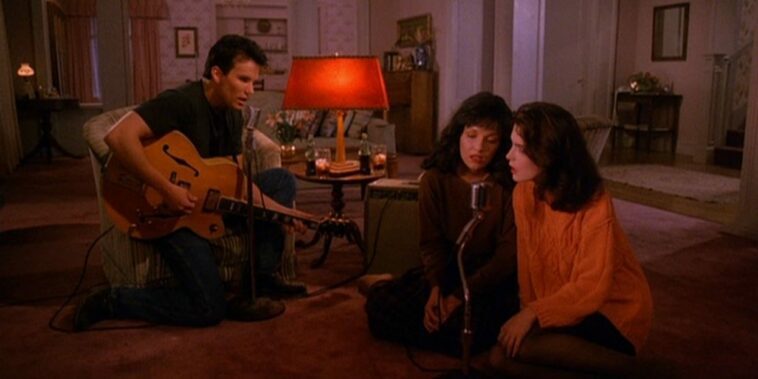 When Twin Peaks: The Return Part 13 ended with James Hurley on stage at the Roadhouse singing “Just You” many fans felt as though they were being trolled. The song is infamously divisive, and here it was being presented in the same space that had previously been held by the Chromatics, [The] Nine Inch Nails, and others—as though James was just as big a deal. 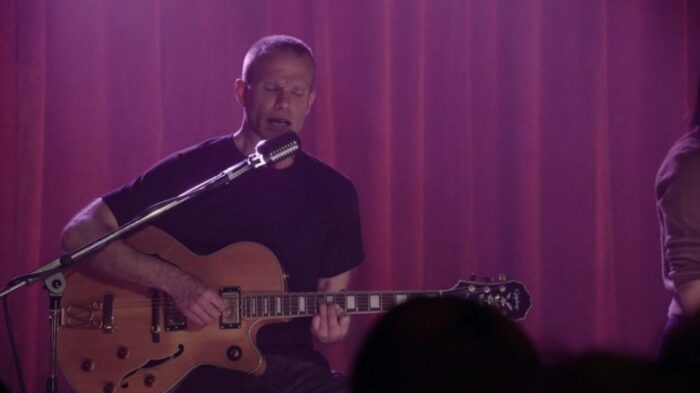 This risks missing the point, however. We should ask what this scene is doing within the context of Twin Peaks, and that means also interrogating what the original scene in Episode 9 was doing in Twin Peaks, along with the effect of its doubling.

In Episode 9 the song occurs in the Hayward residence. This is the first time we hear it in Twin Peaks (though it would become something of a leitmotif with regard to James in Season 2), but it would seem to not be the first time James, Maddy and Donna have performed it together, as the scene opens with James indicating that they have just finished singing it and are now going to sing it again. So the first time is already at least the second time.

Maddy and Donna repose on the floor in front of a microphone, while James kneels to the side, holding his guitar at what is honestly a rather odd angle. But this isn’t to the point so much as we should immediately notice that “just you and I” is being sung by three people. It’s also not really a duet in that the lines are not sung between the parties to the song, but all directed at some “you” that stands outside of the song—that is, these three are singing together as if to a fourth.

The reverb is insane, and James’s falsetto further takes us away from grounded reality. “Just You” floats as a strange musical object, which is surely why so many have found it to be so off-putting. That plus the fact that the song goes on for multiple minutes. Major Briggs has just delivered a cryptic message to Cooper in his hotel room, and then this happens. And it just goes on and on.

James has his eyes closed, as do the girls at first, or off and on. The focus is—or should be—on strolling forever with an idealized beloved, and maybe that went well the first time, but this time that fantasy starts mixing with the reality of the three performing. Eyes open, things start being communicated through them, whole structures of implication pertaining to the relations between these three and the absent fourth, or in and through the absent fourth that serves as a kind of singularity around which their fantasies circulate. 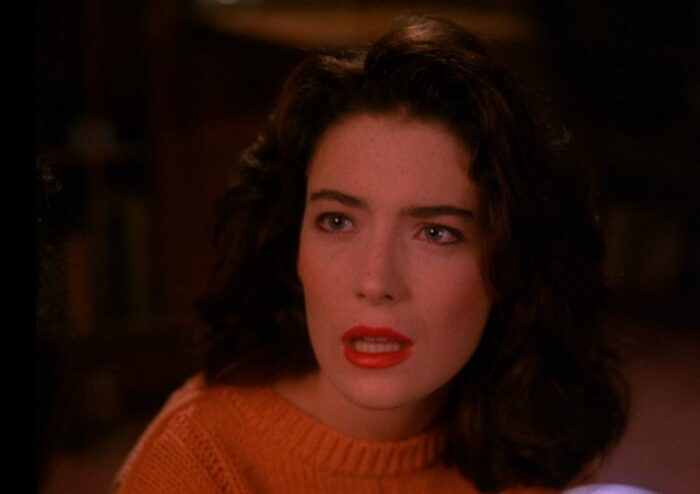 Virtually every shot of Donna shows her face filled with not just longing but fear. And there is a spark that sets off between James and Maddy as their singing progresses. The looks between them tell a story, and Donna reads it just as well as we do, but it’s clear that this involves James seeing Laura in her cousin, and the way Maddy has been pretending to be Laura a bit herself.

The absent fourth is obviously Laura. Not Laura as subject, lost like a turkey in the corn, but as object, as if encased in a golden orb, or enshrined in a Homecoming photo. She haunts everything, and her spirit is in the air between James, Maddy and Donna just as it hovers over all of Twin Peaks. But it’s not her; it’s an imago of her—a fantasy Laura that lives in the minds of men like James. 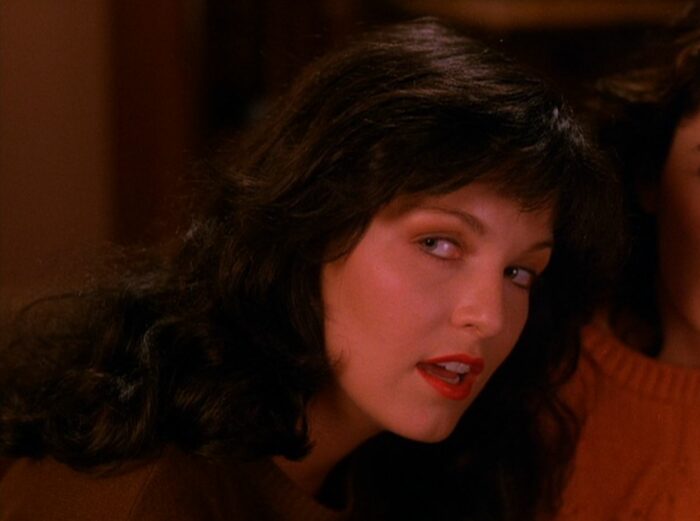 It’s matched perfectly by the tone of the song and its abstract quality. It’s not so much Laura as a je ne sais quoi about her, that thing that Donna connects to when she wears the sunglasses and smokes; what Maddy finds in letting others see her as though she were her cousin.

This is why Maddy sees BOB after the singing is over, as she holds herself awkwardly on the floor of the Hayward house, after Donna has gotten up and run away, begging for James’ affection. Maddy has connected, for the briefest of moments, to that desire that was in Laura; not a desire for BOB but the desire to be desired by BOB—a desire to embrace herself as an object not of sublimity but degradation. It’s the same thing that drives Laura to Leo, and to her death. It’s the metaphorical fire that she walks with. So of course Maddy is terrified, and she should be. 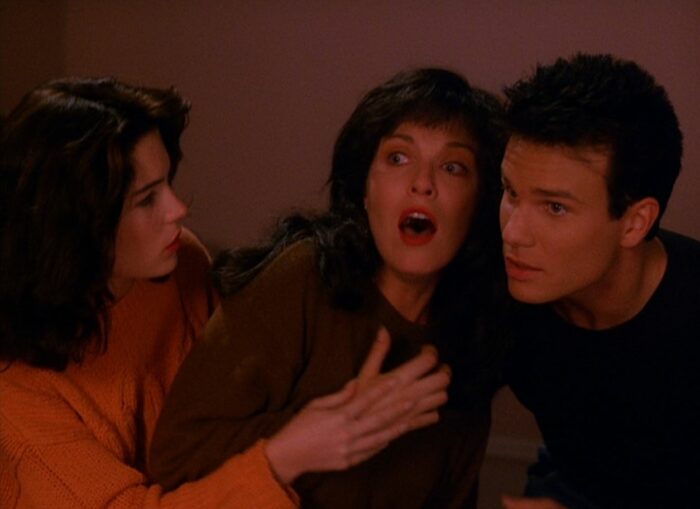 “Just You and I” involves three but is about an absent fourth. And where does the bass come from? It drives the song and the scene even as it is not present within it. No hay bajo.

In The Return, Donna and Maddy are replaced by nameless backup singers, and James is no longer thinking of Laura, except insofar as he is of course still longing after what Laura represents—embodied now in Renee. We get virtually no backstory about James and Renee, but we don’t need it. Of course it is the same old story, over again, the story that repeats itself for James over and over again. The story of James and Evelyn Marsh, which was also the story of James and Laura Palmer. 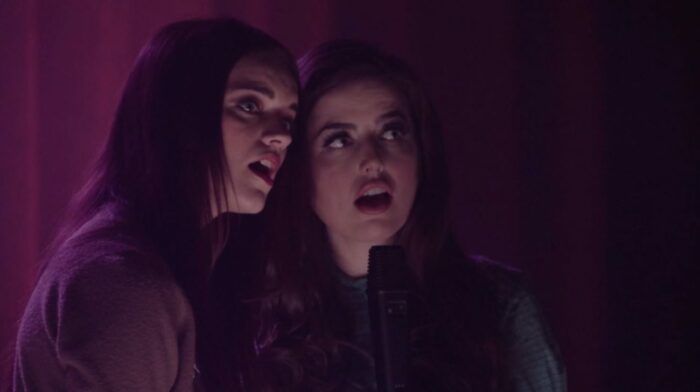 James is sweet, but he’s so dumb. He truly does expect a hidden heart of gold, and it’s there in the lyrics of his song. He wants to go strolling forever, in some kind of paradise away from the travails of the world. Perhaps he felt he glanced up against it that day he, Laura and Donna went for a picnic, but he’s always chasing it. Even when the girl flips him the bird and runs off screaming through the woods alone, or when she frames him for murder. These are all extraneous circumstances, if only we could put them aside and be together…forever…in love.

Renee tears up at the song precisely because she understands and sees that sweet naivete in James. Probably they never did anything but share a nice moment one time that wasn’t even sexual in nature, but she can see how he crushes on her, and though she thinks it’s sweet she even more so finds it to be deeply sad. 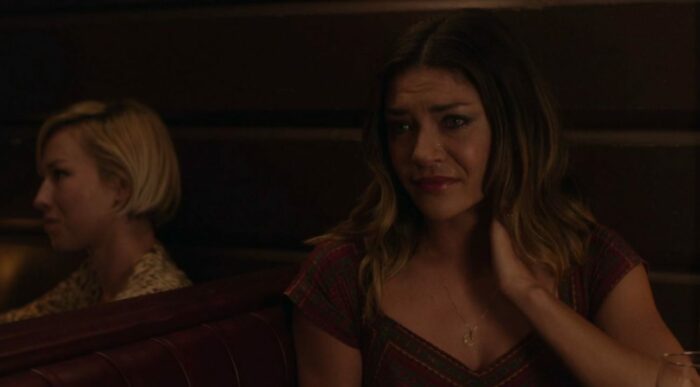 James believes that it could be “just you and I” when in reality that’s impossible. The world is always there and you can’t make it go away, stop it and melt together or any other such nonsense. His relationship with Donna fails because they both want something they can never have, and they can never have it because it’s impossible—a kind of romantic wholeness and fulfillment for eternity.

What happened to James Hurley in the 25 years in between Laura’s death and what we see of him in The Return? Perhaps a motorcycle accident, but fundamentally nothing. Nothing has changed, and we miss the force of Shelly’s remarks about how he’s always been cool if we get caught up in the question of whether she’s lauding him.

James has always been cool—not smart, not savvy or sophisticated. He’s always been an exemplar of a beautiful soul on a motorcycle, a rebel with a cause albeit a sappy one.

But let’s not be too hard on James, because he’s also an exemplar of us all when we watch Twin Peaks. Because there can be no doubt that Twin Peaks is Laura Palmer’s story. Except that it clearly isn’t, as she’s absent almost entirely throughout. That doesn’t stop her from haunting every scene as a fantastical object. It’s the Laura in the Homecoming photo, or you may as well imagine her as a divinely created orb bestowed upon the world. When we see her as subject, as in Fire Walk With Me, it’s brutal and beautiful, but it’s as though we can’t remember the truth of her existence, or hold it in mind through the rest of the story.

We’re constantly led to a memory of Laura that is also a fantasy of Laura. “Just You” is an ode to that idealized girl in a picture frame, an ode to the imago of Laura that Sarah tries to smash at the end of The Return, only to find she can’t destroy it. It’s the Laura that Leland beseeches Cooper to find. But when he does she slips from his fingers because she never existed.

The challenge is to grasp Laura in her truth, as the hurt and broken young woman who tells James that his Laura is gone.