I don’t know about you, but I actually like winter—the dark…the cold…the stillness of snow lit by the moon. It’s a perfect time to stay inside and watch TV or films, listen to music or discover some podcasts. Each week our staff gathers in this space to recommend those things we’ve been into recently. They may not always be new to the world, but maybe they’re new to us, or new to you. This week Caemeron won’t shut up about Severance, Lor is playing Pokémon Legends: Arceus, and Paul K. thinks maybe you should give Joe Bell a chance. (This is Caemeron writing this intro, by the way. Watch Severance!)

Caemeron Crain: I really can’t recommend Severance on Apple TV+ enough. It’s filling the Yellowjackets-shaped hole in my heart. Not that there is all that much similarity between the two shows, I guess, except that they are both well produced, directed, acted, and sountracked, and both involve a mystery that has something of a novel form to it. Oh, and there’s dark humor in Severance, too. But mostly I just mean that it’s a new show that I won’t be shutting up about for the next couple of months, just like Yellowjackets was.

The premise of Severance is something that might occur to you while you’re working a slog of a job, or if you’re contemplating Karl Marx’s theory of alienation (or both!): workers undergo a procedure that severs their work self from their non-work self, such that they have no longer or awareness of what they do while they are at work, but equally the version of them who works the job has no knowledge or awareness of themselves outside of the office. Immediately this raises philosophical conundrums about personal identity, but Severance layers on the mysteries by making us also get to wondering about what exactly the company at its center is up to.

The cast is outstanding. Adam Scott in the lead role certainly adds to the humor of the show, and thinking of other roles he’s played over the course of his career just helps rather than hurting anything about the experience. Additionally, Severance features Patricia Arquette, John Turturro, and Christopher Walken, though I can’t promise you they are all in the show a lot (I have only seen the first two episodes as of this writing). Dichen Lachman is in Episode 2 and I hope to see her again (a statement which is pretty much always true), and Britt Lower (who you may recognize from High Maintenance or somewhere else) is something of a co-lead to Adam Scott. She’s great!

The first two episodes are directed by Ben Stiller, who is clearly heavily involved in the production of this series, and written by Dan Erickson (who has the writing credit on the whole of Severance, which seems to be his first project of note).

I can’t say I was exactly excited when Apple TV+ was announced a few years back, nor that I’m exactly happy about how many streaming services there are anymore, but I do continue to be impressed with some of the stuff they’re putting out. I liked Mr. Corman, even if no one else did. There was something innovative about it, and it’s nice to see Apple TV+ taking some chances.

Severance strikes me as a bigger swing, and it’s one I think will hit. Go and watch the first two episodes, and then you can come back and read what I’ve had to say about them. I will be writing on the show each week, in addition to telling everyone I know to watch it.

Lor Gislason: I’m a massive Pokémon fan so I was super excited for this game! Taking a different direction from the usual battle-heavy mainline games. Instead, you’ve been transported to the Hisui region during its discovery and early settlement, with your task set as creating the first Pokédex.

Catching is the main focus here, with battling second. There are very few required battles, and even most Pokémon can be captured by luring them with berries, distracting them with smoke bombs, or other items to sneak up on and whack in the back of the head with a Pokéball. And you’ll need to catch A LOT because dex entries now have different requirements (use this move, feed it berries, number defeated, etc). This gives completionists a nice array of tasks to even out the smaller overall Pokémon population. It’s really fun to just run around (or ride on a few Pokémon) catching guys left and right.

Another part I really enjoy are the details to the characters and region. Almost every NPC you meet is an ancestor of a previous Pokémon character, and the newcomers all have wonderful designs. It’s interesting to see people who don’t love Pokémon for once; many of the villagers are downright terrified of them. Sidequests, where you introduce or teach someone about a Pokémon, are charming as they navigate learning to cohabitate with the creatures. I’m hopeful future Pokémon titles will use different formats like this or keep some of the QoL improvements in Arceus because they really streamline things. Moves can be changed at will, and can be performed as “Agile Style” or “Strong Style”. Agile will do less damage and allow you to move twice, while Strong does massive damage. Even my SO, who’s been bored of the typical Pokémon games, has been playing it nonstop, so I consider that a huge success. 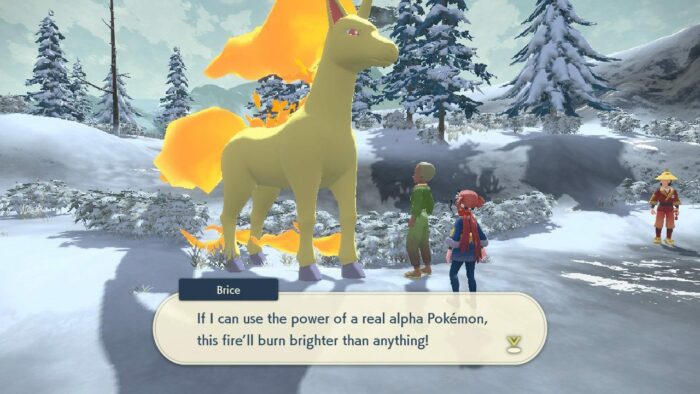 Paul Keelan: Sure, Joe Bell is the kind of Made-for-TV message movie that inspired suburban America circa 2000. Sure, it is melodramatic, sappy, and formulaic—relying on obvious emotional and narrative gimmicks. Sure, it overly focuses on Joe Bell’s tragic pursuit for penitence and unfairly sidelines his son Jadin’s coming-out story. But is there anything all that wrong with this? Every story does not need to be placed in an either/or binary. A father seeking redemption and catharsis by walking across the country to speak out against bullying and homophobia is fair material for a mainstream movie. Add a tragic twist to the mix, and it’s surprising this wasn’t adapted sooner.

Witten by the Academy Award-winning team who wrote Brokeback Mountain, this film is certainly not of the same caliber and is clearly not for everyone. Most millennials and cinephiles will find it stiff, corny, and cloying. Nevertheless, as an ostensible member of both of those demographics, I don’t think it deserves the ubiquitous cynicism it has received. With a gristly Mark Wahlberg at its helm, this heavy-handed slog has a better chance at altering the opinions of certain populations than a more sophisticated and artsy LGBTQ+ film.

Personally, I too prefer more nuanced films; heck, I’d take something as lovable yet generic as Love, Simon over this. But I also think Joe Bell is an effective heart-tugger that just might open and change a few stubbornly homophobic hearts. Its intentions are clearly in the right place—even if it is aesthetically lackluster and tonally sloppy. Thus, while I definitely don’t want to create unrealistic expectations by fervently championing this movie, I do feel that it has some redeeming qualities. It is available to stream on Prime, there are much worse ways you could waste a Tuesday evening.

What have you been into this week? Let us know in the comments!