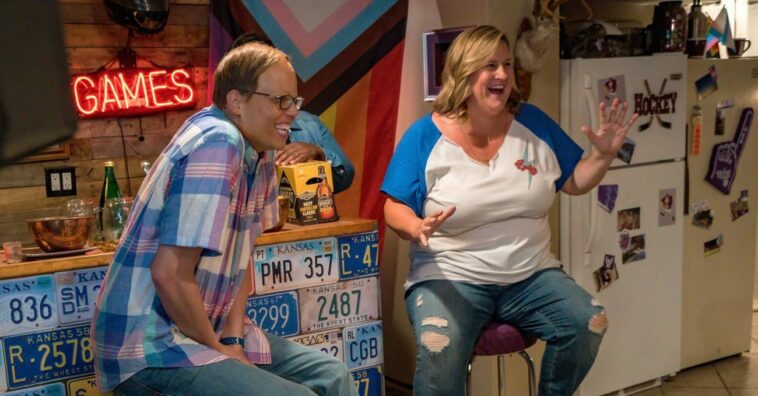 The following contains spoilers for the Season 1 finale of Somebody Somewhere, S1E7, “Mrs. Diddles” (written by Hannah Bos & Paul Thureen and directed by Jay Duplass)

Towards the end of Somebody Somewhere S1E7, in the middle of a party and after Sam has sung a vulgar song, Joel exclaims, “This is church!” Which is how I have felt about the event of choir practice since the series premiere. It’s a question of community, and what binds us together, which is, in fact, a part of the very etymology of the word religion, or at least I think it is. The root of the word either goes back to religare (“to bind fast”) or relegere (“go through again” or “reread”), and I suppose we can actually see “Mrs. Diddles” playing with both of these possibilities at a conceptual level, whether this was intentionally tied to these Latin roots or not.

What has always made me suspicious of those who say they are “spiritual but not religious” is that it’s an incredibly individualistic thing to say, as though the big questions don’t have anything to do with others but are just some internal matter. I understand what they’re bucking against, of course, insofar as the objection is to the strictures of codified dogma and those who try to impose their repressive values on the world (and upon themselves). This has been a running theme of Somebody Somewhere too, but focusing solely on this aspect of organized religion and rejecting all religion as such risks missing that the issue isn’t just about one’s little personal beliefs. Indeed, I would suggest that even these are not merely a private affair, because they always affect how we relate to one another and are always affected by others whether we like it or not.

It is the bond of community with others that forms what we should take as holy—love, in all its polyvalent senses, is what transcends the mundane. In this regard, Joel is a minister, even without the official title. He ministers to Tricia and Charity as they fight in the Tender Moments shop, quoting Colossians before noting that some things cannot be fixed. But if this is your dream, work it the f*ck out. It’s a profane call to forgiveness, and it would seem that the two do work it out, if only in light of their shared passion for the store.

Bear with each other and forgive one another if any of you has a grievance against someone. Forgive as the Lord forgave you. Colossians 3:13

We finally learn in the season finale what led Rick to choir practice, as Sam takes the opportunity while (technically) stealing his smoker to just ask him about it directly. It’s more or less how I imagined it.

Rick says he heard the event occurring as he walked through the mall, poked his head in, and liked it. He intended to attend all the way on this second visit until he saw Sam and got cold feet. He wasn’t there for any nefarious purpose, but rather felt drawn by the sense of community and acceptance. Of course, that is very sweet, as Sam says, but it doesn’t change how he cheated on Tricia with Charity. Stupid Rick. We might be prone to forgive him, but honestly, he’s the one who’s messed his personal relationships, and it’s not Sam’s place to forgive him. 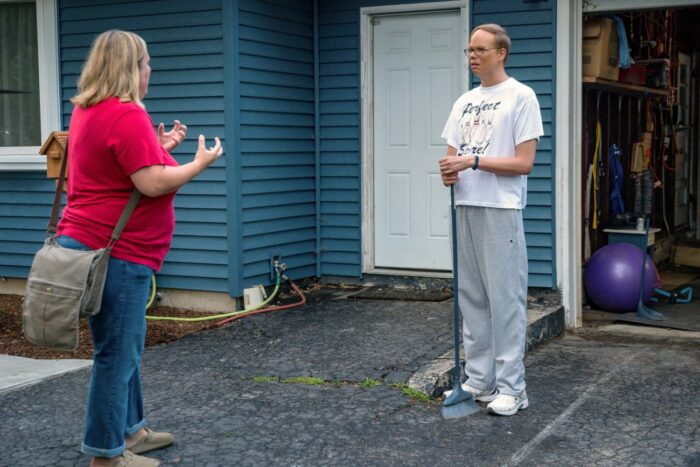 Sam has a plan to reboot choir practice in the barn where she and Holly spent so much time singing together. She sings Joel a song she wrote for him, making all of us tear up along with him. Once again, it’s the power of human connection that’s brought Sam out of her funk, to be able to move forward.

The repetition of church is important, along with the community that defines it, and it’s paralleled in friendship, which has to be enacted again and again. We’re going through life together, constantly rereading and reinterpreting existence—constructing meaning, but never doing it alone. It’s not for nothing that they call the Eucharist “Communion”—any ritual involves repetition by definition and those we perform together create bonds between us.

A poker game can be a ritual, and choir practice certainly is (or was). This is church! And through it Sam has achieved a kind of salvation.

At the end of Somebody Somewhere S1E7 Sam finally gets off the couch to lie down in bed—Holly’s bed. It’s as though she can finally accept that her sister is gone. In a sense, she’s been born again, saved from the rut she’d fallen into, through the love of others.

On the other side of the coin, MJ leaves rehab—because Ed can’t really afford to pay for it—and promises she can make it work with his help. But the last we see of her in the season finale, she’s wandering in the dark, probably searching for booze and beginning her cycle all over again.

We don’t know for sure that this is the case, and who knows how this story will go, but it’s worth noting how understandable MJ is, even if we can all recognize her behavior as destructive to herself and others.

She recognizes that it is too. She expressed deep regret to Sam in S1E6, for example, and I believe that she wants to change. But our habits and patterns cut deep—habits not just of behavior but of thinking. Habits of being in the world. And for MJ when things feel hard her move is to hide from the world. The drinking hangs together with not answering the calls about Holly’s headstone. She just can’t deal with it.

If she is able to, ultimately, she’ll need help and she knows it. But she still might fail. As a contrast to Sam’s story, Somebody Somewhere makes clear through her mother’s that nothing is guaranteed. Salvation does not flow from logic, or a series of rational causes, so much as it breaks that chain. This is what makes it divine.

Tricia goes to see Coop, to talk presumably, but we don’t see their conversation. One can imagine them bonding over their unfaithful spouses, finding a certain kind of solace in that, and perhaps even mutually deciding to forgive. Or not. It’s not like we can say they should insofar as the whole thing about forgiveness is that it lacks justification.

It’s a good thing Somebody Somewhere has been renewed for a second season so that we can see these stories continue. Throughout its first, the series has felt like a breath of fresh air in our miserable world, rekindling in me something of a hope for humanity that I had thought the past two years had extinguished entirely.

To its creators, I say thank you. You’ve brought me home.