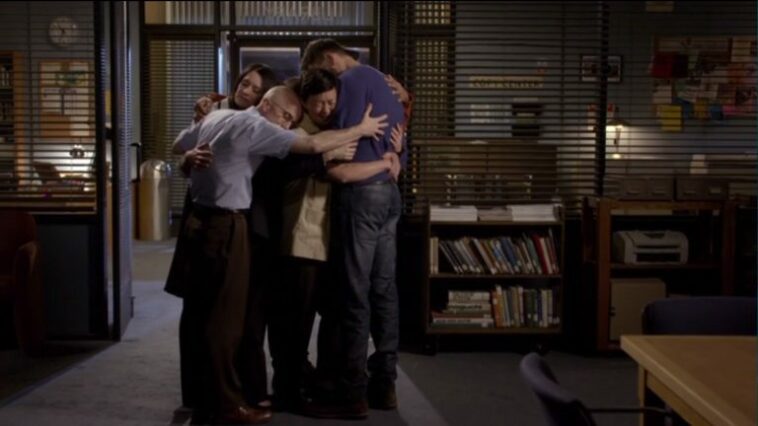 Recently I was, not for the first time, watching the Friends series finale. I watched Monica and Chandler pack up and move out of the iconic apartment, knowing that this was the end of an era; for both the characters and the viewer, things could never go back to the way they had been for the past 10 seasons. TV shows are special because of the amount of time viewers invest in watching them. A show that you love might define a whole period of your life; the events and characters might not be real, but TV shows are a real part of our real lives. I think that episodes like the Friends finale have been preparing me for this growing-up-and-moving-out stage of life that I am in now.

“I can tell life from TV, Jeff. TV makes sense, it has structure, logic, rules, and likeable leading men”

Sitcoms, and most serial genres, run on a formula that is established in the first few episodes and will last for seasons if not the whole show. The repetition of the formula creates a false sense of permanence. The viewer gets used to things being a certain way, but whether it’s in the finale, or halfway through a show’s run, there inevitably comes a point where the formula is rudely disrupted. Actors leave, writers leave, and shows are often expected to continue beyond their natural end point. These occurrences may leave the viewer feeling like Theseus aboard an ever-changing ship, but I will argue that the inconsistencies and ephemera are features, not bugs, of television.

The study group in Dan Harmon’s Community had almost as many variations as the show had seasons. The series finale addresses the problem of change head-on—knowing that Season 7 is unlikely to ever happen, the characters begin pitching what their ideal Season 7 would be.

The news that Annie and Abed are moving away to pursue their dream careers sends protagonist Jeff Winger into a panic, and his pitches include some implausible ways of making them stay at Greendale. In this episode, he is the voice of the dedicated viewer—he’s scared to let go.

“It’s TV, it’s comfort. It’s a friend you’ve known so well and for so long, you just let it be with you […] and it needs to be okay for it to get on a boat with LeVar Burton and never come back. Because eventually, it all will.”

Over the course of the episode, Jeff has to learn that letting people move on is a kindness, even if it means that he will have to adapt to life without them. At the end, Frankie asks everyone to “imagine their own personal version of Season 7”—Jeff sees himself greeting a brand new study group, where all his friends have been replaced by attractive women (at least he’s seeing the brighter side). He gives them the same speech he gave in the Pilot—“you just stopped being a study group. I hereby pronounce you: a community”—which gives it a pleasing cyclical structure, and also serves to remind us that every good thing in our lives was once a new thing.

Often the most destabilising changes happen right in the middle of a show’s run, and are usually due to external factors. As Abed put it: “TV’s rules aren’t based on common sense, they’re based on the studio wanting to milk their properties dry.”

In my early teens I watched Glee avidly, and I remember resenting the fact that the main characters ever had to grow up and graduate from McKinley High (of course, the most inevitable change of all is getting older). The formula of that show made it so that the characters’ lives began and ended with school and the glee club. Those high school friendships and romances were endgame. And given that I was 13 and had never known life after school myself, I really didn’t question the “high school is the most important four years of your life” message. But the thing is, even after the original protagonists graduated, Glee didn’t end for another three seasons. My initial reaction to the new New Directions may have been, “who are these strangers and what are they doing in my favourite show?”, but the show had to adapt, and therefore so did I. Glee was perhaps a more realistic (music department budget aside) depiction of high school because the high school experience ended.

How I felt about Agent Mulder’s departure from The X-Files was fairly similar to a real life break-up. I never wanted him to leave, and I couldn’t imagine ever being happy without him, but as it happens the Mulder-less half of Season 8 is actually great. What I learned was that it is possible for things to change and still be good. I know that this sentiment is not shared by all X-Files fans, and that for some this change was too great for them to even consider it The X-Files anymore (and the same goes for when production moved to Los Angeles at the start of Season 6). Seeing change as an opportunity rather than a hardship might be a necessary part of being a X-Phile. Consider the fact that I was aghast when, as a result of Gillian Anderson’s maternity leave, Mulder had to take on a different partner—no one could replace Scully, even temporarily. But this new partner not only became my favourite character, but was an asset to the show, opening new and exciting doorways for the show’s mythology. Change can be an opportunity, rather than a hardship.

Pose is another good example from Ryan Murphy’s repertoire. I thought that the original House of Evangelista (Damon, Angel, Papi) must be the definitive House of Evangelista. Unfortunately, this attitude is missing a pretty major thematic point. In another great cyclical ending, Blanca echoes the words said to her in the Pilot: “houses are homes to all the little boys and girls who never had one, and they keep comin’ every day, just as sure as the sun rises”. The point of the houses is that they will always be open to new people, and the people may be different from one year to the next, but the love is the same.

At different points in your life you are either the person who stays behind (like Jeff Winger or Agent Scully) or the person who leaves (like Abed or Agent Mulder). When TV shows break from formula in these big ways, it shows me that it’s okay for things to change, because the show goes on, and there will always be new people to meet and make new seasons—I mean, memories—with.

The biggest difference between TV and life is that you can’t ever go back and start life again from the beginning. In TV, the answer to the question “what comes after the finale?” is “the pilot”. For better or worse, life is like one of the Doctor Who missing episodes—broadcast once and then never seen again. So life has to be about embracing change. It has to be.