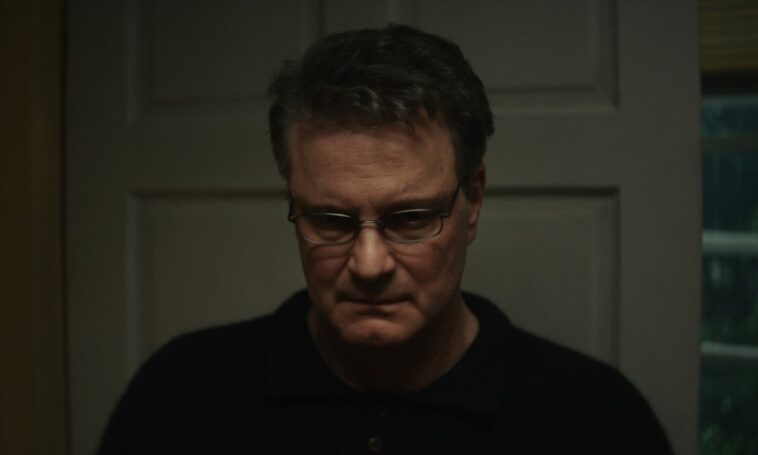 Based on the documentary of the same name, The Staircase tells the true story of the death of Kathleen Peterson (Toni Collette). Her husband, Michael (Colin Firth), claims a fall down the stairs in their family home resulted in her death. Given the unlikely circumstances, the house is almost immediately declared a crime scene and Michael is the prime suspect.

The Petersons, in flashbacks, appear to be a picture-perfect family. They share meals, toast one another’s accomplishments, and appear to have genuine compassion for each other. Of course, these scenes are a direct contrast to the image of Kathleen sprawled on the floor at the base of the stairs. The crime scene is a mess. There’s blood on the walls, but not just a smattering. It all looks much more sinister than a simple fall down the stairs.

The first episode of the series is the sort of generic, prestige, true crime retelling that audiences are used to. There are flashy big-name actors doing their best impersonations of people whose lives have already been on display on the news and documentaries. It can feel a bit redundant, given the tsunami of true crime media in the past few years. This type of series needs to justify its existence without feeling exploitative.

Thankfully, The Staircase seems to recognize the shortcomings of the genre and pivots in the second and third episodes toward more than just Michael. It was essential to have a more formulaic premiere episode to lay the groundwork of the case for new viewers, but that’s unsustainable, given the sprawling doc that came before. There’s no real need to rehash the same beats from the documentary.

The Staircase gets a little meta by introducing Jean-Xavier de Lestrade (Vincent Vermignon) as a central character. He’s the director of the original miniseries this show is based on. As the season progresses, there’s room to dig into why Jean-Xavier wanted to tell the story of Kathleen and Michael Peterson and what it says about society’s obsession with true crime. Why do filmmakers have a need to document these murderous events and why do audiences continue to tune in?

An added benefit of telling Kathleen’s story in a scripted manner is that audiences are given a (fictional) idea of the person Kathleen was. So often in these true crime shows, the victim is reduced to flowery adjectives, but no real sense of the person is offered. Kathleen Peterson died in December of 2001, but the audience gets to see her in the months leading up to that night. They see the layoffs she’s forced to carry out at work, her relationships with her kids, and her marriage to Michael. Despite this effort to put a personality to the name, Kathleen is still a stranger to the majority of the audience. They never met her in real life and will never get a full idea of who Kathleen Peterson was, simply because she is not around to be known.

One of the main aspects the docuseries wasn’t able to fully explore is the splintering of the Peterson siblings. The family is made up of children from numerous marriages. Michael and his first wife, Patricia (Trini Alvarado), had two sons, Clayton (Dane DeHaan) and Todd (Patrick Schwarzenegger). They lived in Germany for quite a few years where they befriended their neighbors, Elizabeth and George Ratliff (not featured in the scripted series), who had two children, Martha (Odessa Young) and Margaret (Sophie Turner). George passed away after they became friends, and soon after that, Elizabeth died. Michael became the guardian of Martha and Margaret. When Michael and Patricia divorced, all of the children moved with Michael to North Carolina where he met Kathleen. The two married and Kathleen’s daughter, Caitlin (Olivia DeJonge), moved in with the rest of the family.

The five kids were initially a united front of support for their father after Kathleen’s murder. However, the autopsy report made Caitlin believe that Michael may not be innocent after all. The rest of the kids support Michael through the trial and the appeals. The Staircase (2022) briefly looks at the relationship between the kids and why Caitlin changed her mind, but certainly leaves a lot to be desired. Since this is a fictitious retelling, there’s a little bit of room for writers to speculate about the conversations the siblings were having.

This series takes place primarily in 2001. There’s something about the props and the set design that feels too manufactured. The glossy sheen comes off as unnatural. The clothes, the Orange Julius cups, and the technology are all period specific, but there’s a disconnect between them and the actors. The series feels removed from that tumultuous time of the fall/winter of 2001, and it’s jarring in an insidious way. As the episodes progress, The Staircase begins to feel like nothing more than a Dateline reenactment with a high production value.

The Staircase is technically sound, and Grant’s performance is terrific. He has nailed down the rhythm and the voice of Michael Peterson, but for people who have seen the docuseries, there isn’t much reason to stick around. The series is trying to play on the ideas of truth and the failings of the American justice system, but it’s only addressed in brief glimmers. Too often, the show falls back on the tried and true cadence of prior true crime adaptations. As The Staircase progresses, it will be interesting to see whether it justifies its existence.

The first three episodes of The Staircase are now streaming on HBO Max. New episodes will be released weekly on Thursdays.