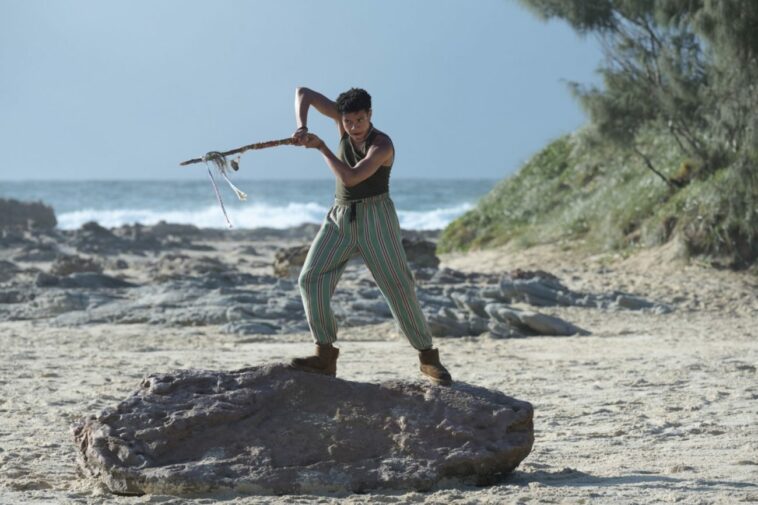 The fears and shortcomings that emerged in the premiere of The Wilds Season 2 only become more exacerbated as the season progresses. It’s disappointing to see a show that handled mental health, sexual assault, and other heavy topics with grace and nuance devolve into something more akin to a soap opera. Similar intense topics are attempted in Season 2, but the introduction of the new boys throws the balance of the show into turmoil.

This article covers Episode 2 through the penultimate Episode 7. In terms of what that means for each group and their time on the island, these episodes covered days 34–50 for the girls and days 12–33 for the boys. Gretchen (Rachel Griffiths), the mastermind behind these social experiments, reveals that the girls lasted 50 days and the boys lasted 34, but the audience hasn’t seen either party leave the island.

As was feared, the storyline of the girls was pushed aside in favor of the introduction of the boys. Through Episode 5, the storyline for the girls is nonexistent. Every once in a while, there’s a small glimpse of the group’s banter or Rachel’s (Reign Edwards) grief or Shelby (Mia Healey) and Toni’s (Erana James) relationship, but then the show falls back on a montage. It’s a profoundly disappointing choice, because the scenes with the girls are far livelier and more interesting than the ones with the boys.

The absence of quality screen time with the girls is so apparent because the audience actually knows these characters deeply. In Season 1, each girl had an episode that focused on her life before the island. More often than not, the episode was framed by the girl recounting a story to the FBI agent in the bunker. The theme of the story from the island they were telling usually mirrored the flashbacks to their life before. It was an interesting thematic device that allowed the audience to see how life on the island had changed them. This was a smart, effective way to balance three different timelines while weaving a cohesive story with connecting themes.

There is no deficit of potential character development for the girls that would give the series a reason to show less of them. In fact, Season 2 poses many interesting questions for the girls, but they aren’t given the time and space they deserve. Rachel is grieving the loss of her sister, Nora (Helena Howard), and Leah (Sarah Pidgeon) is grappling with her mental health. At the end of Season 1, Leah was certain that Nora knew something about why they were on the island and may have hallucinated trapping Nora in a pit. Rachel and Leah are tied together because of Nora, but also because their mental health is at an all-time low. They find a broken, kindred spirit in one another. Their friendship develops almost entirely off-screen, and that’s a detriment to the conversation about loss and mental health the show could be having.

There’s also the fact that Shelby doesn’t signal to the boat she sees during her nighttime watch. She finally admits this to Toni, and says it doesn’t matter if she ever makes it back home. If she were to be openly gay there, she would be dead to her family anyway. That scene is a reminder of what was so special about Season 1. Yes, these girls are on a deserted island fending for themselves, but all of them find strength in this new world. A world with no expectations of how they should look, dress, talk, or act. It’s just about surviving, and this isolation is a rebirth of sorts for them. Shelby’s decision to stay isn’t one she makes lightly, but it isn’t given a real, meaningful exploration.

At the end of the first seven episodes, Martha’s (Jenna Clause) health has deteriorated. She became the group’s main hunter during Season 1, and it’s a role she proudly carries through most of Season 2. During one of her walks through the woods, she sees a dead bunny with its babies gathered helplessly around the carcass. It’s at this moment that she breaks down and the realization of the cost of their survival becomes too much for her. Back in the real world, Martha was a huge animal lover, and the reality of what she’s done while hunting causes her to become catatonic. She will not speak or move, and spends her time lying on the ground at the campsite, staring off into the distance.

Unfortunately, given the lack of screentime, the change in Martha’s mental and physical state takes place in about five minutes. That’s a recurring theme for most plot points now. There’s a quickness in the stories that wasn’t present in Season 1. It’s especially difficult to watch when the audience has developed such a fondness for The Unsinkable Eight. They’re bright, smart, funny, and conflicted characters, but were reduced to almost nothing this season.

The problem with the boys is exactly the same as the problem with the girls. There’s simply not enough time. In an ideal world, the second season would have focused entirely on the girls and the rest of their time on the island. It could have included more flashbacks to their lives beforehand and more of their lives at the underground bunker. In the first seven episodes of Season 2, only Leah has been seen in the bunker.

Quite simply, the boys were introduced too early. That cliffhanger introduction should have been at the end of Season 2. Unlike the first season, not all the boys get a full introduction or an episode centered around their lives before the island. Instead, the show seems to expect the audience to fill in the blanks. We’re told that some of these boys have it hard back home, but given no more information than that. This season exemplifies the age-old adage of storytelling: show, don’t tell.

There’s a sexual assault on the boys’ island that tears them into different factions based on who each boy believes is telling the truth. What could have been a nuanced look at masculinity, abuse, and what it means to be a survivor boiled down to nothing meaningful. This story deserved to be handled with care, and had the boys had their own season, it probably would have been done better. It’s disappointing and frustrating, given how tactfully they handled Martha’s sexual assault in Season 1.

The boys’ journeys before they arrived and while on the island feel like they’re being played on fast forward. None of them are particularly memorable, and that’s not an insult to the actors and their performance. It’s simply the fact that the structure of this season was destined to fail. Documenting the conclusion of the two separate social experiments, the interpersonal conflicts, the flashbacks, and the flash forwards is a Herculean task that cannot be thoughtfully accomplished in only eight hours of television.

With only one episode left for Season 2, it’s unclear how exactly the show will wrap up. Off the island, one of Leah’s friends, Ian (James Peter Fraser), tracks down the address registered to the Dawn of Eve program. It turns out to be the apartment of DJ (Elliott Giarola), Gretchen’s son. It seems an alliance between Ian and DJ could lead to the freedom of both groups.

The audience has some clarity about the lingering questions from Season 1. Nora is alive and well, watching the girls on the monitors at Gretchen’s lab. The Dawn of Eve program began before the Twilight of Adam, but it’s unclear how many days sooner the girls started.

There are still some things left to be answered in the finale. What is Gretchen hoping to gain from these studies? She is stressed about why the boys fractured, as they’re the control group, yet it’s unclear what makes the boys the control group, especially because they started after the girls. There’s also the matter of how both groups get off the island, and will the audience get to see them readjust to normal life? Based on how the rest of the season has progressed, it’s unclear whether the audience will get meaningful answers to these questions.

All episodes of The Wilds Season 2 are now streaming on Amazon Prime.