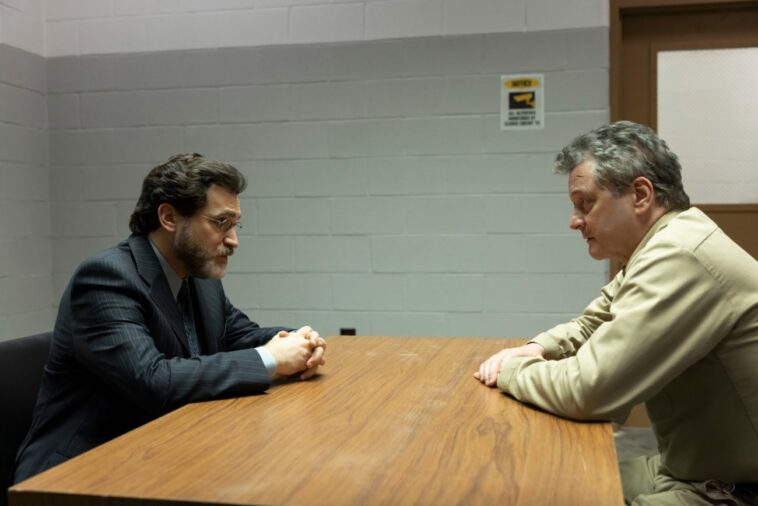 The following contains spoilers for The Staircase (2022) Episode 5, “The Beating Heart” (written by Antonio Campos, Aja Gabel, and Emily Kaczmarek, and directed by Leigh Janiak).

The Staircase Episode 5, “The Beating Heart,” tells the audience about Michael Peterson’s (Colin Firth) life in jail after the verdict and his developing pen pal relationship with Sophie Brunet (Juliette Binoche). At the core of this episode are the French filmmaking team of director Jean-Xavier de Lestrade (Vincent Vermignon) and producer Denis Poncet (Frank Feys) as they prepare to release their documentary. Much of the episode’s drama comes from editing room fights between Sophie, Jean-Xavier, and Denis as they argue about which scenes are most important to their docuseries.

This episode has sparked controversy with the actual documentary filmmakers. In an interview with Vanity Fair, Jean-Xavier de Lestrade was upset with the path that Episode 5 took. He said that it’s one thing to dramatize for the sake of creating a fictitious show, but it’s another to outright lie. This phenomenon of exaggerating and lying about true events for the sake of creating a “better story” is not unique to the true crime genre. There’s an entire website called History vs. Hollywood that’s dedicated to exposing the discrepancies between actual events and what’s portrayed in movies and TV.

Jean-Xavier, prosecutor David Rudolf, producer Allyson Luchak, editor Scott Stevenson, Sophie, and Michael all unanimously agree that the relationship between Brunet and Peterson did not begin until after Brunet finished editing the original docuseries. Episode 5 heavily implies that Sophie’s editing of the project was influenced by her growing feelings toward Michael. The filmmakers involved continue to maintain that The Staircase (2004) is meant to be a balanced look at the trial and at Michael Peterson. They say that as documentary filmmakers, they have the same “integrity and ethical standards” as journalists, and to imply anything different damages their credibility.

Even after spending years personally interviewing the Peterson family and attending the entire trial, the filmmakers are still split over whether Michael killed Kathleen. Producer Poncet and director Jean-Xavier had many lengthy discussions about Michael’s innocence, but they never affected the outcome of the docuseries. That much is clear from The Staircase’s (2004) final product. It’s an unbiased look at the Peterson trial, and the series leaves it up to the audience to make their own decisions. Michael maintains his innocence through the entire 2004 docuseries, but the filmmakers show evidence that stacks up against him.

Of course, there must be some level of dramatization when true life is adapted to fiction. Conversations must be created and no one’s memory of events is perfect. The French filmmakers agree that The Staircase (2022) did dramatize other aspects of the events, but were significantly less consequential events that do not call the integrity of their 2004 docuseries into question. Prosecutor Rudolf has been writing a column pointing out many of the alterations between truth and fiction. In a response to the first episode of the 2022 series, Rudolf took issue with his fictionalized self (Michael Stuhlbarg) eating a pastrami sandwich when he first met with Michael. That’s the sort of dramatization that’s harmless. Sure, Rudolf would like to point out the inaccuracy, but it doesn’t affect the overall story.

While Binoche’s performance as Sophie is of the high caliber audiences are used to seeing from her, her character is written as extremely reductive. She is an accomplished editor who is being reduced to essentially a love interest. Sophie’s editing credits include the Palme d’Or-winning Blue is the Warmest Color, a number of docuseries and documentaries, and fictional TV/movies. Her work on The Staircase (2004) helped the series win a Peabody Award. Sophie has been working as an editor since 1991 in a field where women are still underrepresented. The Staircase (2022) paints her as a woman who is so enamored by a man she’s never met before that it affects her ability to edit the documentary.

This decision to so fundamentally alter the truth feels at odds with the greater themes of justice and honesty that are at play in the overarching series. Yes, the inclusion of the filmmakers and Sophie and Michael’s relationship is an interesting angle, but it calls into question the motives of the 2022 series’ creative team. By not depicting the relationship in its actual form, The Staircase (2022) becomes the thing it was adamant to avoid: a salacious, manipulative take on the truth.