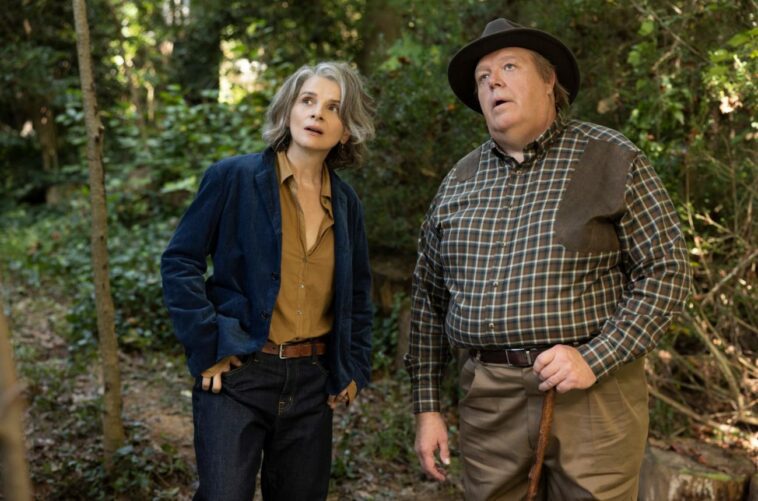 The following contains spoilers for The Staircase (2022) Episode 6, ““Red in Tooth and Claw” (written by Antonio Campos and Emily Kaczmarek, and directed by Leigh Janiak).

“Red in Tooth and Claw” is the long-awaited introduction of the Owl Theory. This theory was excluded in the original 2004 docuseries, but gained prominence because of a series of YouTube videos uploaded in 2008. The videos and the theory were created by Michael Peterson’s (Colin Firth) neighbor Larry Pollard (Joel McKinnon Miller). Larry poses the theory that Kathleen wasn’t murdered, nor did she fall down the stairs. Instead, all of her injuries can be explained by a barred owl attack.

On the surface, the theory sounds far-fetched. Could an owl really be responsible for the death of Kathleen Peterson (Toni Collette)? Based on the information available, it’s not outside the realm of possibility. Barred owls are massive, and they have been known to attack people. Larry compiled a number of news reports about people who had been attacked by barred owls in the Durham, NC, area.

The theory Larry shares with Sophie (Juliette Binoche) is that Michael stayed at the pool while Kathleen left to set up Christmas decorations in the front yard. While she was there, a barred owl dive-bombed her. The struggle that ensued accounts for the drops of Kathleen’s blood on the porch and the smear of her blood on the front door. Larry believes Kathleen tried to go upstairs to get a cloth to stop the bleeding, but ultimately fell to the bottom of the stairs, where Michael later found her.

Again, this is a seemingly strange explanation for the events of that night, but not entirely unfounded. An overlooked piece of evidence originally collected from the crime scene was a feather found in Kathleen’s hand. Twigs and leaves were also found in her hair. While not a smoking gun, these do cast a shadow of doubt on the events of that evening.

The Staircase (2022) began as a run-of-the-mill true-crime dramatization, then shifted to an exploitative manipulation of actual events. With Episode 6 and the focus on the Owl Theory, the series plays with the idea of truth. It’s less damaging than last episode’s implication that Sophie’s feelings for Michael affected how she edited the documentary, but the Owl Theory demonstrates how impossible life can be to fully explain or understand. How the justice system is little more than a storytelling session with a jury of one’s peers deciding which lawyer is the better raconteur.

Evidence is supposed to offer undeniable proof of an event or a crime. From bits of evidence, crime scene investigators and detectives should be able to determine what happened, leaving no room for doubt. Yet the most successful aspect of The Staircase (2022) is demonstrating how the same evidence can be used to tell a multitude of truths. This episode ends once again with a retelling of the events that occurred on the night of Kathleen’s murder. This time, the audience sees the owl attack and Kathleen’s subsequent fall down the stairs. It’s the third time the show has retold the events of that night. Each version showcases a different lead-up, but ends with Kathleen in the same position at the bottom of the stairs. All are justified by the evidence, but the truth feels further out of reach each time.

Sophie makes a plea to Caitlin (Olivia DeJonge) for the right to exhume Kathleen’s body. It’s the only way to truly put the Owl Theory to the test. Medical examiners would be able to search Kathleen’s skull for animal DNA and determine whether the lacerations on her skull match those of a barred owl’s talons. Caitlin declines because she believes Michael is guilty of murder. Without Kathleen’s body, the Owl Theory cannot go beyond speculation.

At the end of the episode, Michael decides not to agree to an Alford Plea. While it would free him from prison, he’d have to admit that he had killed Kathleen. His choice is summed up in the episode’s final line, delivered by Michael: “A lie does not set you free.” It’s a stark reminder that someone knows the full truth about what transpired between Kathleen and Michael that night. Maybe that someone was only Kathleen and she was attacked by an owl or sustained all her injuries when she fell down the stairs alone. Maybe Michael’s 911 calls and his steadfastness in his innocence are true. Or maybe he’s been lying and he had a hand in the death of his wife.

The issue with presenting the story of Michael and Kathleen Peterson as a dramatized series is that audiences are desperate for a conclusive ending. All stories must have a beginning, a middle, and an end. Obviously, as a true story with no conclusive answer to the question of how Kathleen died, The Staircase (2022) is missing a purpose. The flashbacks to Kathleen’s life are becoming so intermittent that they barely add anything to the audience’s understanding of who she was. The stories of the Peterson children are just as sparse, but perhaps would have made a better focus for the series. They will never be sure about how their mother died and they were not the focus of the 2004 docuseries. The lives of the adult children caught in the middle of this crime could have elevated the 2022 series to something beyond a simple retelling.