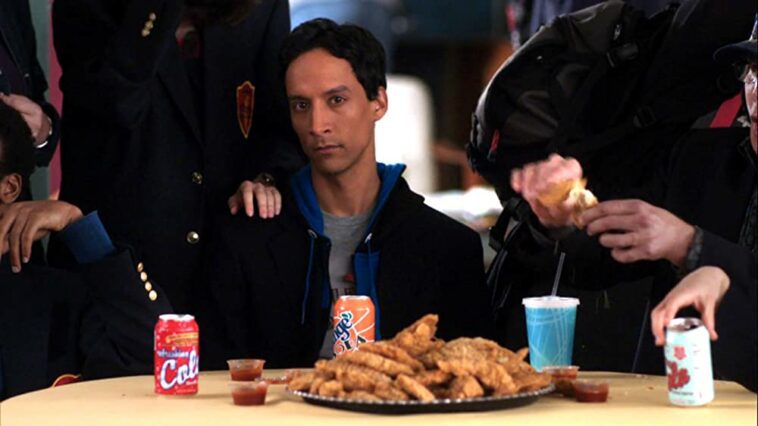 Community, S1E21, “Contemporary American Poultry” was a departure at the time. Up until that point, series creator Dan Harmon and the writers had basically been working on a traditional, if reference heavy and narratively complex, sitcom. Jeff Winger’s (Joel McHale) shady past and the relatively grounded lives of the study group members were the focus. But then, we get to S1E21 and the chicken fingers. When the narration kicks in, the audience is transported into Martin Scorsese’s Goodfellas in a way that, especially at the time, felt truly inspired.

Suddenly everything was different, and while the setting is still Greendale Community College, the look and feel of the entire show shifts. With the style, delivery, and format of the narration, we move inside of Abed’s (Dani Pudi) mind as he becomes our Henry Hill (RIP Ray Liotta). But the transformation is not so superficial; director Tristram Shapeero leans fully into Scorsese’s style in every detail, going so far as to emulate everything from the lighting to the singular cinematography of Michael Ballhaus. Everything about the show connects to Goodfellas as scenes play out and the study group descends deep into the incredibly silly, chicken finger-related, mobster shenanigans.  But the decent is immersive and treated seriously, allowing it all to become so much more interesting and revelatory than mere reference humor.

For parody to work, it has to be specific, and actually tell a compelling story. Creators often think that simply referencing a film or genre in passing is enough to make the comedy connect. Or worse yet, they decide to reduce the entire thing to a mere slapdash collection of tropes from the entire genre. But, of course, this usually makes the material seem like nothing but references to the original work, or at least a collection of things that are only funny if they are taken in direct comparison to the original. 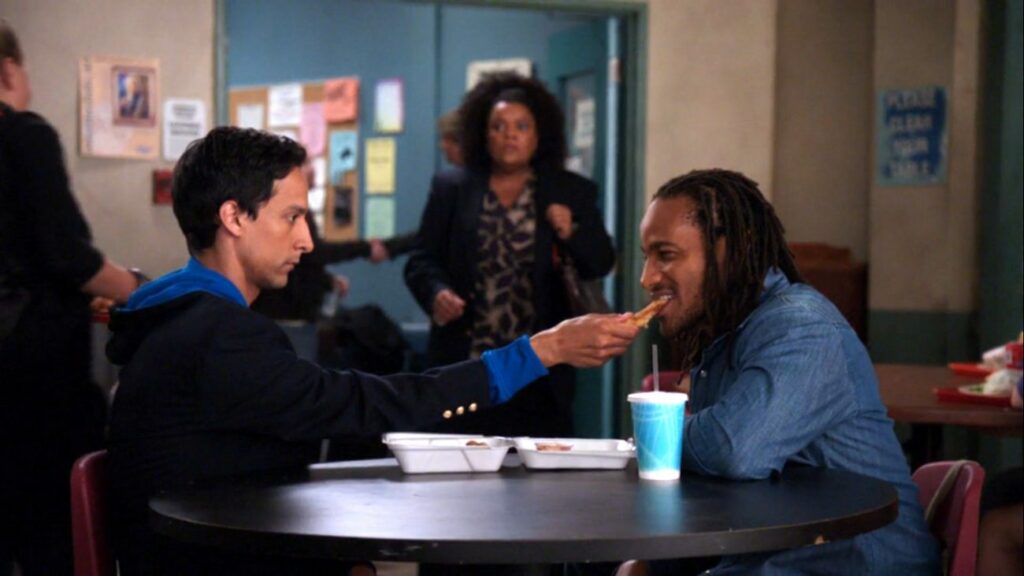 This is where Community so often succeeded when other shows, especially its would-be imitators, have failed, especially during the first, second, and third seasons when the cast was still intact and the series was still under Harmon’s leadership. The show always took pains to make the satire flow naturally from both the plot and the characters. The homages and references to the point of the parody were not given free rein over the story. Everything about the references had to serve the story, not overwhelm it. (Which is the real problem at the heart of the “non-Harmon” Season 4, but the failures of that “gas leak season” have been well examined.)

“Contemporary American Poultry”, Community S1E21 is often cited as the first real example of what would become Community’s calling card, the fully immersed parody homage to a genre or particular movie. This concept would come to define the show and ultimately transform the show into its beloved, but still divisive, final form. Here, however, the translation is not perfect. Unlike the now controversial, but still nearly perfect “Advanced Dungeons & Dragons”, the Law & Order homage of “Basic Urpine Urology”, or the full-on western immersion of “A Fist Full of Paintballs”, Community S1E21 does not transform into a mini version of Goodfellas for its entirety.

And that is the one great drawback to an otherwise exceptional episode. Abed, ever knowledgeable of his own–and the show’s–references, even constantly mentions that he sees the whole story with the chicken fingers playing out like a mob movie. This is true, S1E21 is a mob movie parody and the antics of the plot fit perfectly into that box. But it is not when the show is referencing “mob movies” as a whole that it is at its best. “Contemporary American Poultry” tries to touch on other mob movies, other Scorsese films, and even Sixteen Candles at the end. But the specificity is key, so it is only when the show leans entirely into embodying Goodfellas that it really works.

Part of the reason it works so well is about that movie itself. This is probably not a shocking take to anyone, but Goodfellas is… actually really good. Scorsese was absolutely at the top of his game as a director and screenwriter. The cast could not have been better, especially Liotta, Lorraine Bracco’s Karen, Robert DeNiro as Jimmy the Gent, and Joe Pesci’s Oscar-winning turn as Tommy DeVito. The movie is super memorable and compelling, and every single scene just looks singularly special. You can take a still from any frame of Liotta and Bracco walking through the Copa and know you are watching Goodfellas. (And this is true even for people like me, who don’t particularly care for mob movies, or even Scorsese films, and have not seen this movie in 25 years.)

That is the key thing: Community S1E21 falls off when it starts to reference The Godfather instead of Goodfellas not because either film is better or lends itself more to the humor, but because it is in that moment that the specificity starts to falter. The Goodfellas homage is complete; it invokes the music, the narration, the camerawork, and the plot. The Godfather references have none of that. When Abed sits and listens to people making inane requests it plays like a pale imitation of the original. Abed may feel like Don Corleone, and Pudi definitely shifts from Liotta’s mannerisms to Brando’s, but the shot is not set up to emulate what Coppola did to make that scene extraordinary. 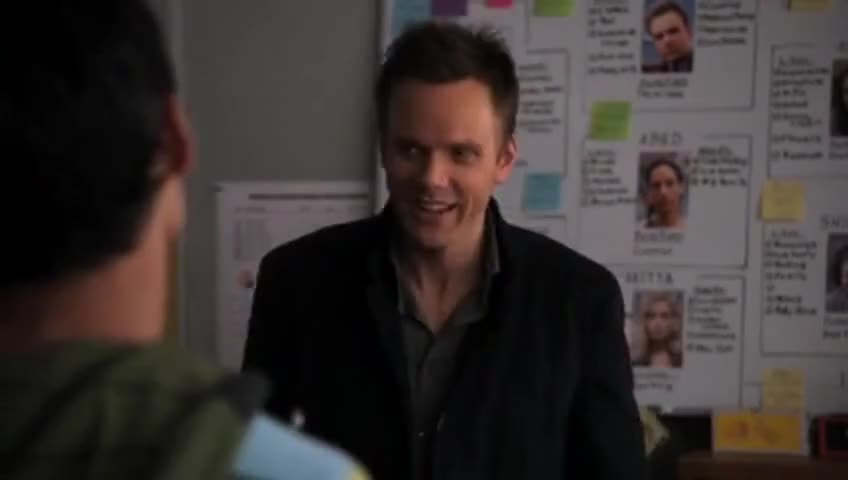 But when we see the camera follow the chicken fingers through a scene, with wistful narration and the background noise almost–but not quite–silent, it evokes the entire essence of Goodfellas. Those moments are what make it memorable, and special. Throughout these scenes, Cutler and Dornetto’s script just oozes the spirit of the film. The show doesn’t even have to make a joke when the first notes of “Layla” kick in; anyone who has ever seen the movie will know what is coming. Then the fact that the jokes that follow are perfect for Community and its characters is what makes the show better at doing exactly this than any other show has ever been.

It isn’t the references or the embodying of Hill and Corleone that make Abed’s story interesting. “Contemporary American Poultry” is only using what we know about those characters to move forward with things we already know about Abed and Jeff and to force them to realize those things about themselves. Abed’s compulsion toward seeing himself and his circumstances through those references is the story. The story and the parody don’t distract the character, they help him to see himself and the others more clearly.

The story helps to humanize Jeff in the same way. Jeff understands that he has to turn on Abed, to force him out of the fantasy he has built by destroying everything the study group has built. The notes of “Layla” start to play and we get the montage of all the destruction Jeff, like Jimmy before him, pushed upon his friends. By embracing the insanity and understanding what is happening through the lens of how things went down for Hill, Jimmy, and Tommy in Goodfellas, we are given greater insight into all of the study group. Allison Brie, Gillian Jacobs, Donald Glover, Yvette Nicole Brown, and Chevy Chase are all super funny in S1E21 and are all essential to the show, but it is a story about Jeff and Abed 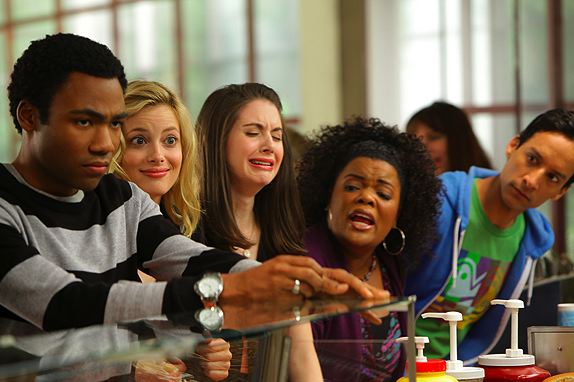 Jeff and Abed end the story together, having gone on the hero’s journey that Dan Harmon weaves into even the smallest of stories. As they sit and reminisce the story tightens, narrowing the focus to just the two of them. That focus, and the way the show isn’t afraid to make the characters unlikeable in the story, is what makes Harmon’s shows resonate so much with certain audiences—and exactly what makes them untenable to others. “Contemporary American Poultry” is merely the first step into the greater world that Community would come to define and it is a tentative step, but it is also one of the most memorable and confident moves any first season sitcom has ever made. Really, this is the moment that Community became COMMUNITY.