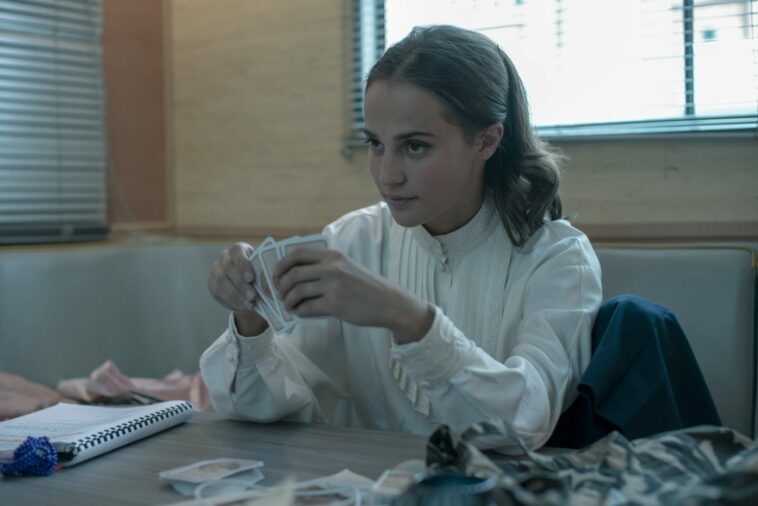 The following contains spoilers for Irma Vep Episode 2, “The Ring that Kills”  (written and directed by Olivier Assayas)

If last week’s premiere episode of HBO’s new miniseries Irma Vep, written and directed by Olivier Assayas as an eight-part adaptation of his own 1996 feature film, gave viewers all the necessary exposition they needed to begin Mira Harberg’s (Alicia Vikander) adventure on the set of director René Vidal’s film, Episode 2, “The Ring that Kills,” is all about raising the stakes. Complications develop, conflicts escalate, and on-set tensions exacerbate an already-jeopardized shoot, but that’s not all: here Assayas begins to develop several key themes on the current state of cinema. This new Irma Vep is off to a delightfully dizzying leap.

Regrettably, this week former lover Laurie (Adria Arjoni), the former personal assistant who is now married to Mira’s Doomsday director Herman, is nowhere to be seen. In Episode 1 she burned up the screen with her sultry stares, slight finger-strokes, and sensual commands, before bidding her own surprisingly vengeful adieu. Now Mira is a bit more focused on preparations for her portrayal of the infamous villain Irma Vep, and early in the episode we see once again how quickly she adapts to the catsuited character, lithely prancing and flitting about as soon as she is zipped up.

“It’s hot,” she says, as she doffs the mask. Is she blithely unaware that others seems to think so, if in in a different way? We’ll soon see what René thinks of catsuits.

Behind the scenes, production assistant Regina (Devon Ross) inspects the apartment rented for Mira and is underwhelmed. On the phone, she and Mira’s agent (Carrie Brownstein) squabble about the production, and soon the agent is carping to Mira about the production, telling her it’s soon to be shut down for lack of insurance and that Mira would be far better off with a role in a Silver Surfer reboot that promises a lead role—and a blank check. Many stars of Mira’s rank, including most in the Marvel Cinematic Universe, alternate their big-check superhero roles with lesser-paying, lower-profile roles that sustain them artistically if not financially. But having just finished up her work in Doomsday, Mira seems far more eager to invest in René’s project—whatever, exactly, it is.

Speaking of René, his portrayal by Vincent Macaigne is turning out quickly to be a comic highlight of the series. Episode 2 features two of his therapy sessions as the production’s potential insurers (the first dropped out) ponder his competence. Both are delightfully comic, lending some depth to the director’s aspirations and inspirations. He “can’t stand interactions with people,” he says—a difficulty given that his chosen profession requires daily interactions with dozens of cast and crew— and he prefers simply “to avoid them.” How can that work? René is adamant that he is “making a film,” he also says, confronted with the fact that he is making an eight-episode serial. “It’s not a series,” he says. “I don’t make series. It’s a film, divided in eight parts.”

What makes a film a film? It’s not the film itself—filmmakers have been shooting and editing on digital for decades. Is it length? Structure? Content? Intended audience? Distribution method? Assayas is using his director stand-in to comment on a question at the heart of cinema and today at its most pressing, as prestigious film directors and stars now find themselves enthused or obligated to create content for streaming services. And, some might say this relatively new mode of exhibition is fast outpacing theatrical exhibition not only in revenue but in quality. Obviously, Assayas and Vikander themselves are invested in it. But René’s thinking seems a bit more old-school: to him, the episodic serial, even if that’s what he appears to be making, doesn’t hold the same cachet as a film.

But then, René’s inspirations are hardly intellectual. They’re not even expressly cinematic but instead pop-cultural. A later session with his personal therapist explores his fixation with catsuits. He recalls Diana Rigg, playing the often catsuited Emma Peel in the 1960s British hit television series The Avengers (not the Marvel Avengers but yes, a series, not a film, though it was shot on film). René recalls fondly how she—not Diana Rigg but the fictional Emma Peel, he is careful to note—was tied up and captured, the series’ bondage imagery designed intently to appeal to men’s sexual desires. (It’s even how the character got her name, “M. Appeal” being shorthand for “Man Appeal” according to Dave Rogers.)

Yet even if René believes he can separate the fictional character from its portrayer, one has to wonder how much and when that line will blur, given that Irma Vep is a remake of a film in which the Irma Vep portrayer, Maggie Cheung, began to take on the character’s traits and that Vikander’s MIra has already pilfered a credit card while wearing the catsuit. In the heat of production, that line between reality and illusion or the real and the “reel” often gets blurred.

On the set, René’s problems are none the better for his medication and therapy sessions. Edmond (Vincent Lacoste) in particular questions his decisions and demands greater motivation for his character: the two squabble and fight, coming to blows. And Edmond, though he is insufferable, does not seem at all wrong. In appearing to adapt Feuillade’s serial Les Vampires fairly faithfully, René seems almost oblivious to his characters’ motivations and unable to answer most basic questions of causality. Feuillade’s serial was a crazy banger of villainy featuring dozens of unmotivated twists and turns that thrilled French audiences in the silent era, but over 100 years later audiences today have substantially different expectations. Like Mira reminds René, the action may be 1916, but “our audience is now.”

I recall the scholar Brian McFarlane making a simple, clear point in his book Novel to Film: that adaptations are never just adaptations; they are, first and foremost, films, and despite their antecedent sources must find ways to resonate with audiences of their own day. I am not certain René Vidal knows (or is supposed to know) what he is doing in adapting Feuillade, though I am certainly intrigued that Olivier Assayas is perfectly cognizant of every question he is raising in remaking his own Irma Vep in 2022. It too, is not “just” an adaptation but a series, and although it’s impossible for me to watch it without knowing his 1996 film, so far it is its own satisfying, thought-provoking entity.

While René’s difficulties threaten the production, Mira seems determined to make it a success. After all, she has much to prove. Her agent thinks this is the wrong choice (and it is a smaller payday for them both); her reputation seems to rely on her ability to perform as something other than a superhero (though Irma Vep was certainly one if not called such in Musidora’s day); and she’d love nothing better than to prove her mettle to Herman and Laurie.

Mira exhibits some considerable grace and patience in several scenes, gently calming tempers and putting the work first. She finds release in her dance, whether an impromptu shrug to a club version of “99 Luftballoons” or in rehearsals for her café number. She takes in stride rumors of a lesbian relationship with PA Regina, which she neither encourages nor denies, and she adroitly finesses costume designer Zoe’s (Jeanne Balibar) own direct questions about her sexual experience. Mira is more than used to being the object of attention—and Alicia Vikander seems relaxed and confident in the role of an international superstar well acclimated to the spotlight. “You make a deal when you want fame,” she says. “You agree to give up a piece of yourself.”

When the time comes for her to perform as Irma Vep, Mira is more than ready, channeling her allure into a direct-to-the-camera dance number that has René ecstatic (and soon discussing his predilection for fictional women in catsuits to his therapist). She is a star. And Vikander, classically trained in ballet, sells the scene.

Meanwhile, Gottfried Von Schrack needs crack. Or so the balding, eyeshadowed, open-chested disaster of an actor (Lars Eidinger), arriving on train, tells the production assistant there to meet him. Soon she is on her own quest to score the addicted actor the drugs he says he needs to qualm his anxieties. Other than the legality and lethality, what’s the difference between his dependence and René’s? The scene reminds us that working as a production assistant demands more than simple transportation. Whether it’s good drugs or tasty craft services like those served on the set of Emily in Paris (now there’s a dig!), the actors have their needs.

The episode concludes with Mira, as Irma, and her Vampire partner in cahoots, carrying out a scheme that has Irma, in a guise as a hotel maid, slip Edmond’s character a mickey in order to steal in and make off with the Vampires’ Red Codebook. It’s a scene that causes Mira all kinds of questions. Who would hire Irma Vep as a maid? Why do the villainous Vampires keep all their secrets in a codebook—a bright red one at that? The scene itself, part of Feuillade’s Episode 3, “The Red Codebook,” is typical of Les vampires’ roller-coaster twists and turns: Irma and her partner appear to be shot at point-blank range by Edmond, but the bullets were blanks; the two escape with the book and abscond across the Parisian rooftops. Les vampires is full of these kinds of fakes and reversals.

Feuillade’s convolutions may not make much sense in the film Vidal is supposedly making for a contemporary audience, but his delightfully wily criminal lives another day to carry out her evil ways. I am expecting as the series continues for René’s on-set troubles to exacerbate, Mira’s fascination with Irma to intensify, and multiple characters’ obsession with Mira-as-Irma to escalate. Mix in each of those complications with the cast and crew’s frustrations and addictions, and the set looks well poised to explode in chaos.