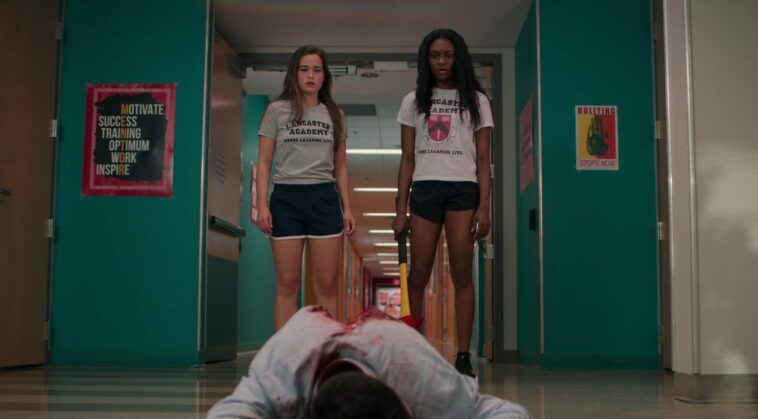 One of the immediate criticisms about First Kill is its “cheesiness.” It’s a critique that feels warranted after viewing the CGI effects in some of the later episodes. It doesn’t take a keen eye to realize that First Kill didn’t get the thirty-million-dollars-an-episode budget that the most recent season of Stranger Things received. It’s understandable that Netflix wouldn’t make that massive investment in a brand new show, but the disparity in funding speaks to a larger issue at play with Netflix. There’s growing frustration from viewers that Netflix is canceling many series after one season without any real information as to why. These early cancellations often have a more diverse cast or are centered on under-represented individuals, and they aren’t given the benefit of the doubt for a second season. It may be cynical, but the odds are that First Kill will lose its second season to a series that has wider appeal.

Yes, First Kill is cheesy, even extremely goofy at times, but it’s fun. If these years of the pandemic have taught us anything, it’s that we should embrace and celebrate the things in life that bring us joy. Not every TV show or movie has to be a life-changing piece of sophisticated art. Those have importance in their own right. Sometimes it’s important to watch a show where a character says, with utmost sincerity, “My closeted sort-of boyfriend got eaten by a zombie, so I’m gay spiraling.” Or to see a group of friends carrying a dead body wrapped in a Taylor Swift blanket through the woods. It’s ludicrous and nutty, but First Kill is also joyous. It’s entertainment for the sake of entertainment. There’s something lovely about First Kill’s oddball sincerity.

When dealing with vampires and monster hunters, there is always a “cheesiness” built in. Those stories require a suspension of disbelief, but what’s wrong with that? Why do viewers have more patience for these suspensions of disbelief when a series like Game of Thrones is doing the asking? It’s disappointing to see First Kill endure the same criticisms that plagued Twilight all those years ago. The happiness of teenage girls is still something to be looked down upon.

First Kill is grounded by the teens. Cal (Imani Lewis), Ben (Jonas Dylan Allen), and Juliette (Sarah Catherine Hook) are effortlessly charming leads and their scenes mark the high points of the series. When the three of them are the focus, the show shifts back to what made the first episode so compulsively watchable. Their chemistry and their problems are often more compelling than the drama of the familial grudges. The larger issue of monsters returning to Savannah pales in comparison to the teen angst. In fact, these detours into the grand monster scheme take away from the central romance of Cal and Juliette. In many ways, their relationship is hopeful. Not just for the positive LGBT representation, but also because it showcases the belief that a young person can unlearn centuries of hatred. It demonstrates the potential for lasting change and the deconstruction of antiquated biases. Cal is shocked that Juliette is kind and gentle, the antithesis of what her parents told her about monsters. It makes her question the definition of a monster in a way she’s never done before.

Juliette is desperate to become a vampire on her own terms. Her family may have little regard for humans and use them as meals when they see fit, but Juliette doesn’t want that. Her means of rebelling against the family is to maintain her gentleness. She learns that it takes greater strength to maintain kindness in a harsh world than to give in. The relationship between Cal and Juliette is a hopeful example of what first love can bring. It shows how first love can change people for the better.

Even Ben isn’t immune to reevaluating the ideas his mother passed down to him. When it becomes popular knowledge that monsters have returned to Savannah, Ben’s mother, Bunny (Annunziata Gianzero), starts a group called Moms Against All Monsters (MAAM). Ben takes issue with the organization because he doesn’t think monsters should be treated any differently than humans, and certainly not hunted. His lifelong friendship with Juliette is the main reason for this reevaluation, and it’s a beautiful sentiment from all these teens. The younger generation has the potential to keep an open mind and create a more inclusive and welcoming world.

The season ends when feelings between the vampires and the monster-hunting families are at an all-time low. Juliette’s merciless, power-hungry sister, Elinor (Gracie Dzienny), attacks Cal’s brother Theo (Phillip Mullings Jr.) and nearly kills him. Juliette finds the injured Theo and attempts to save his life by turning him into a vampire.The entire town of Savannah has turned against the Fairmont family, and Juliette sold out her sister to protect herself. Theo’s dad (Jason R. Moore) no longer sees Theo as his son because he’s a vampire, and this devastates Cal. For so long, Cal looked up to her father as the pinnacle of goodness, but this betrayal of her brother shatters that illusion. The close-knit Burns and Fairmont families of the premiere are no longer. The fractures are deeper than the centuries-old feud between the families.

Most heartbreaking of all, these new splinters tear Juliette and Cal apart. They spent the first season choosing each other over their families because of the bond that tied them together. Even though they end the season apart, their bond is still strong. It’s not just the all-consuming feelings of teenage love, but something deeper that brings Cal and Juliette together. Their break-up is the sort of delicious angst that sustains shows like this. The push and pull of young love mixed with fantastical family feuds makes for a compelling first season of First Kill. Hopefully, this won’t be the last we see of Cal and Juliette.