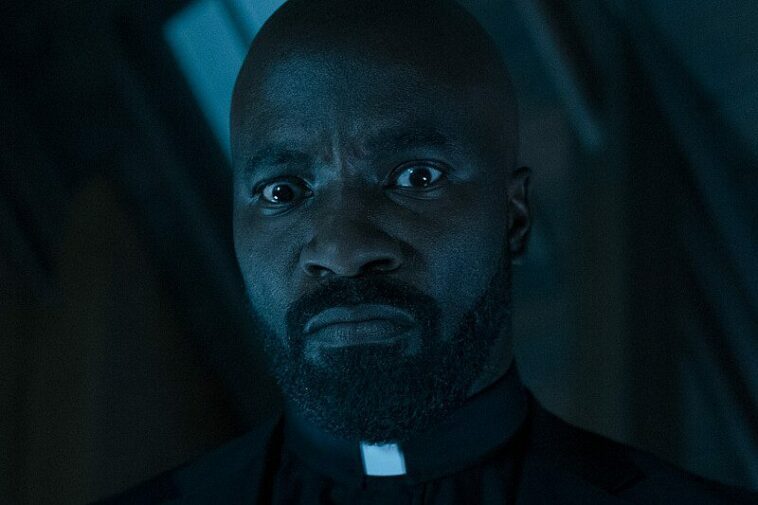 So it turns out that even if you’re a priest, you can still hate your job sometimes. Evil S3E2 “The Demon of Memes” finds David trapped in a montage of frustrating situations and people, from a woman in Confession admitting that she hates her husband for leaving dishes in the sink, to the other priests at the dinner table slurping their soup in a way that evokes one of my favorite jokes from Clue.

This week brings a couple of tantalizingly complex mysteries, brought first by Vatican Secret Service member Victor LeConte (Brian d’Arcy James) kind of just…chilling, staring out the window in David’s room until David comes back. Not creepy at all, dude. I actually kind of love LeConte. He’s so mysterious, James is delightfully odd in his performance, and the idea of a Vatican Secret Service scratches a very specific itch I have involving religious espionage and the unseen cogs in the Catholic political machine. I’m really hoping he becomes a staple of this season.

True to form, LeConte is reticent to share anything beyond the barest details. David name drops “The Entity,” which is also referenced in a Vatican espionage research-focused book I’ve been looking at on Amazon, though LeConte denies its existence in favor of friends and correspondents of the Vatican. I also perked up when David inquired about RSM Fertility.

LeConte challenges David’s chosen vocation, deflecting David’s doubt about what God wants and candidly addressing David’s boredom, his sparse congregation—and asks David to say “yes” to being a friend of the Vatican, and by proxy, carrying out the deeds of their Secret Service. Again, LeConte is such a weird dude, but when he mentions the evil in New York that is not just spiritual, but corporeal, we know that he speaks the truth. He tells David that he will receive a call in the next few days, and David cannot share the details with anyone, not even the Monsignor. When questioned later about LeConte, David denies any encounter. Already, David is being torn between his new role and being a “friend of the Vatican.”

Of course, sworn to secrecy by LeConte and hungry for answers about the Vatican Secret Service and how they might be connected to RSM, David can’t really share anything about what’s going on with Kristen or Ben, either. The phone calls from LeConte could come at any time, and of course they come at the most inconvenient times, requiring him to hastily rush off in the middle of other adventures with his friends.

These tasks are definitely odd—one of them involves David delivering Last Rites to a dying man in a hotel room, although his actual task is to recover a postcard in the room. After the man has breathed his last and David discreetly takes the postcard, one of the man’s guards insistently shoves a $100 bill into David’s breast pocket. David finally gets some answers from LeConte, who tells David that while David deals with the spiritual evil, he deals with the human evil: murderers, tortures, and the like—and the dying man, a “messenger,” had been poisoned. This season has already seen some callbacks to past seasons, and it turns out that the postcard, and the money, may lead to the whereabouts of another messenger, Grace Ling from S1, who has gone missing in her home country. I was surprised that LeConte shared as much as he did, but he didn’t share so much that the mystery dissolved. I suppose it’s the beginning of a drip-feed of information about the Vatican Secret Service.

I’ll be honest, I fastened my seatbelt as soon as I saw that the title to this week’s episode was “The Demon of Memes.” Demons? Memes? ON EVIL? “The Demon of Memes” heavily borrows some of the superstitious lore of Slenderman, although here the meme is “Visiting Jack.” Visiting Jack is a demon who, once he’s gotten ahold of you, requires you to stay inside unless you are fulfilling one of his “Licks.” One of these Licks is to yell “Captain Kirk is Christ!” at a priest, which David has the joy of enduring multiple times in the confession booth.

Lynn’s friend Ren has already been working on the Licks, and is convinced that he will be dragged to hell by Visiting Jack if he doesn’t complete them within seven days—and Jack has done the same at seven houses, killing the residents if they don’t complete the Licks. There are some particularly spooky moments this week, as our heroes take down the addresses of each of the seven houses and look them up on Street View. In each of the photos of the front of the houses, there is a figure with a blurred face. As they scroll through each photo, the figure is closer and closer to the camera, until it’s directly in front of it, face still blurred. I knew where it was going as they were still scrolling, but it was still a great little chill to see the final image with Visiting Jack apparently looking directly into the lens.

This week appeared to be one of those rare weeks where the resolution is relatively straightforward. It turned out that the whole “Visiting Jack” meme was just that—a meme, concocted by a homeless former college student and the Street View driver, selecting locations in which a murder or suicide occurred and coordinating a photo op. I was kind of hoping for more ambiguity, and maybe we’ll get a little more on Jack later, but at the same time I have to remember what LeConte said, that sometimes people are just cruel. It also turns out that one of the houses in question was that of Orson LeRoux, which means that Kristen is still not off the hook for murdering the man, and as Orson’s widow says, the death remains unsolved.

Kristen and Andy are discussing finances, and they realize that the current price that Andy is going for to sell their trekking business isn’t going to cut it. Meanwhile, Laura is applying face cream in the upstairs bathroom when a lot of blood comes flowing up out of the toilet. Taking a look later, Ben is unable to find any more traces in the toilet, and suggests there might be something in the pipes. Cursed shrunken head, maybe?

We know that Leland is a truly, well, evil man, but this week he adds another reason to hate him as he recruites Sheryl to essentially be an internet troll, keeping people “doomscrolling” and reading the latest in political controversy, global warming, and *cough* plagues, because it keeps them from turning to God. And yet, Michael Emerson is so damn good at playing this character, it’s impossible to resist the magnetism of his performance. Leland tells Sheryl that each day, he’ll bring her a “mission” and she will want to question it, but shouldn’t, because she should just do the job. It’s an interesting parallel to LeConte recruiting David: LeConte gives David the complete freedom as to whether he wants to continue to carry out Vatican tasks, and even finally relinquishes some information when David presses. It lends some credence to LeConte actually wanting to do good, as opposed to Leland’s lust for domination and chaos.

Speaking of Leland and Sheryl…Edward is back, and he wants to buy the Bouchard’s trekking business for significantly more than what they were originally expecting. The only catch is that Edward wants Andy to come back out on another trip for three months to show him how to run it. This request is at the behest of Leland and Sheryl. This is probably partially revenge for Andy kicking Sheryl out, but probably more just to get Andy out of the picture again. Now I’m back to counting Andy’s days, and I’m very nervous that he will not return from his trip—it can’t not be foreshadowing that Kristen laments being a single mom and tells Andy, “Don’t die.”

What a fun episode! (He says every week for the next eight weeks, probably.) Evil’s mix of the weird and the spooky, the balance of real-world lore and supernatural legend, and a generous sprinkling of camp and dry humor, continues to fire on all cylinders. With things starting to call back to earlier episodes and seasons with increased frequency, there’s a lot more for me to sink my teeth weekly, as old threads are picked back up and things unexpected are tied back together. We’ll see what next week brings.