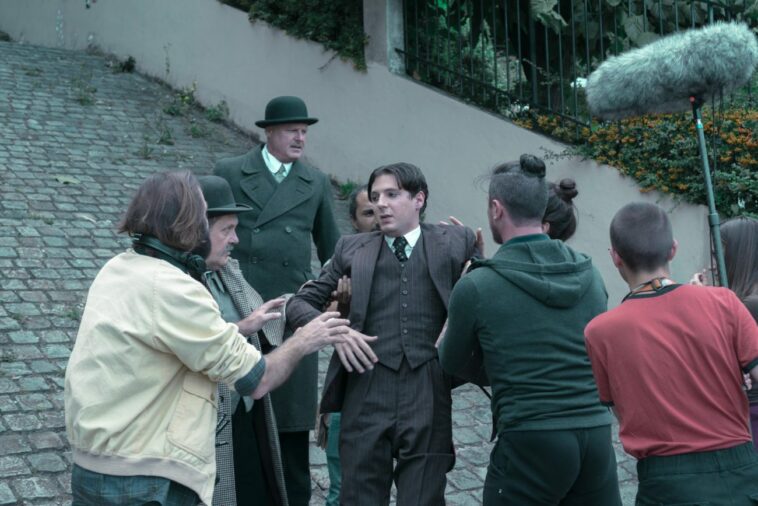 The title of Episode 3 of Olivier Assayas’s eight-part limited series for HBO, Irma Vep—“Dead Man’s Escape”—feels a little more on point than those of the first two episodes. In this meta-meta commentary on the filmmaking industry and his own experiences in it, Assayas has been using the episode titles from Louis Feuillade’s 1915-16 French serial drama Les vampires. The first and second episodes, titled “The Severed Head” and “The Ring that Kills,” respectively, seem to refer only to specific moments in Les vampires, an outlandishly melodramatic crime narrative packed with wild concepts (such as, of course, a severed head and a ring that kills, among others). Other than the fact that Irma Vep‘s characters are remaking Feuillade and re-enacting his scenes, there’s so far been little connection between these titles and this current Irma Vep.

Until the end of Episode 3, that is. More on that, to come. In the meantime, “Dead Man’s Escape” has a few of its own twists and turns. Drug runs, boozy parties, hangovers, rueful reunions, therapy sessions, surprise revelations, on-set catastrophes, and more.

The episode opens with Mira (Alicia Vikander) hitching a ride from Zoe (Jeanne Balibar) on her scooter, as Zoe is delivering Gottfried (Lars Eidinger) his much-needed crack. While Zoe makes calls on her bluetooth headset, Mira adds the hand gestures—a funny little gag that shows how she loves to perform. When the two catch up to Gottfried, they meet the other members of the Irma Vep crew, including Mira’s assistant Regina (Devon Ross), the recent film-school grad and aspiring filmmaker, holding forth on the history of cinema. Prone to argument, Gottfried calls Zoe a “postmodern lesbian”—terms she doesn’t deny, but she tosses her drink in his face anyway, much to the group’s collective amusement.

The evening ends with a besotted Gottfried puking in the rainy garden, and the next day hangovers abound on set. Mira needs water and has a bit of trouble following the increasingly laborious instructions prescribed by director René Vidal (Vincent Macaigne). While the international star has been gracious and patient up until now, here we begin to see Vidal’s methods grate: the instructions here and in a subsequent scene are excessively, nearly obsessively technical and largely without any character motivation or positive feedback—a complaint Edmond (Vincent Lacoste) and others have voiced all along.

Assayas’s regularly inserting scenes from Les vampires has become commonplace enough to the series that it’s an established pattern, one where Feuillade’s scenes are followed by behind-the-scenes coverage of Vidal directing his modern sound version. Cutting from the interior of the train coach to its exterior, a simple box being shaken by crew, disrupts the cinematic illusion and Vidal wants his actors to perform with more “cruelty.” We’ve seen before how the director continuously calls for greater investment from his cast and now things are taking a turn towards the violent.

In a subsequent scene, Vidal wants his stuntwoman to strike Edmond more violently; the actor is unsure but relents, and the two seem to find some mutual common ground. Mira, meanwhile, seems to sigh or eyeroll with each of the director’s laborious instructions. The longer she’s on set, the less sanguine she seems about the project. What Mira desires—an arthouse project that will enrichen her career artistically if not financially—looks to be at odds with Vidal’s increasingly technical direction, lack of character motivation, and obsession with the film’s persuasive depictions of cruelty and violence.

Meanwhile, the character of Gottfried—a hulking, puking mess—seems initially so one-note as to have little promise other than comic relief. An interview he gives to the press (not a magazine but a site) demonstrates his impressive lack of filter: he brags about the size of his manhood, expresses hate for Koreans and Mexicans winning awards, and touts his own character Moreno at the expense of others, whom he characterizes as “f*in’ amateurs.” But he “cleans up well,” and his Irma Vep character is indeed an impressive figure.

Gottfried and Mira, it turns out, share a past. The two have worked together, even if their recollections are hazy, and he has some insight, if bluntly put: “these women all want to eat your pussy,” he exclaims. He assumes Regina is Mira’s girlfriend. (And minutes earlier Assayas showed Regina taking in an eyeful of Mira disrobing for her shower.) Gottfried gets how Mira got played by Laurie and is clearly wondering if a similar dynamic between Mira and her most recent assistant will play out. Regina is, after all, herself full of ambition, just starting her post-film school career.

Mira doesn’t seem to take any of Gottfried’s analysis too seriously, even if it all seems pretty acute so far. There’s one more relationship for Mira to dissect as she visits another film set, this where her former lover Eamonn (Tom Sterridge) is starring in a sci-fi he characterizes as “Blade Runner without the rain or the neo-noir.” The two catch up about their present assignments and reminisce about the past. They broke up, it appears, because of Laurie, and Eamonn has since moved on with just-pregnant famous-singer new-girlfriend Lianna. Even so, there’s a touching ruefulness about his and Mira’s connection: “We f*cked up,” he says. “There’s no way back.”

During this conversation, Mira admits to feeling “unfocused.” It’s such an interesting term for an actor to use. The term can connote a general lack of rigor or motivation, but in cinema it refers to the the optimal sharpness or clarity of the subject captured by the camera. A star might expect to be “in focus,” but Mira clearly feels, as a consequence of her failed relationships, her unsatisfying stardom, and her uncertainty about her portrayal of Irma Vep, less in focus than ever.

If Mira could use some therapy, it’s René whose sessions we are treated to, and there we learn what to my thinking is a fairly major revelation: that decades ago, he made an Irma Vep, a point on which Assayas’s series has so far been silent. That Irma Vep he dismisses as “a low-budget indie film” while images of catsuited Maggie Cheung from Assayas’s 1996 film flash across the screen. This is a “totally different” project, he tells his therapist, defending his film and his “failed” marriage to star Jade Lee. “I was completely in love with her,” he says. “And then it just faded.”

His therapist sees right through Vidal’s working through his own emotions and desires in film. And of course, Assayas himself married Maggie Cheung following his 1996 Irma Vep, a marriage that lasted some three-and-a-half years. “Just don’t be surprised you’re waking up with anxiety,” she tells him. That René had earlier made an Irma Vep—about an actress cast to play Irma Vep—and that his current project is an Irma Vep remake/adaptation that reshoots scenes directly from Feuillade’s 1915-serial—makes this current project of his even more curious and inexplicable.

What exactly is Vidal doing?

Back on set, we see him at work, directing more scenes that place Edmond in peril. First his character is about to be hung: given Vidal’s consistent clamoring for more authentic violence and his ongoing issues with the project’s insurance, this whole scene looks dangerous and soon enough Edmond is swaying uncontrollably about the set. (He looks a little like this poor woman whose neck got caught on a zip-line ride at an indoor amusement park.) But Vidal and Edmond work out an uneasy truce for the sake of the project.

Episode 3 concludes with the scene that speaks most directly to its title, “Dead Man’s Escape.” For the better part of three episodes Vidal has been directing scenes nearly note-for-note from Feuillade’s silent-era original Les vampires. Vidal’s is a sound film, in color, with considerable camera movement; Feuillade’s was silent, black-and-white, and shot with a predominantly static camera. Yet the scenes are largely the same. That modern-day audiences might expect greater character motivation and reject the original’s melodramatic reversals and misdirections seems lost on Vidal, who squees with delight when satisfied and throws childish tantrums when not. His excessively technical directions frustrate his cast, and at every turn his instructions call for more cruelty and violence.

This last scene—like the others, a reshoot of a scene in Feuillade’s original—has Edmond’s character, hidden in a wicker chest, knocked accidentally down a long flight of concrete stairs. Keep in mind that more than a decade before Feuillade was shooting Les vampires his countryman Georges Méliès had already mastered the trick art of the cut, so that a scene like this could be shot without harm to its actor: first, shoot the character in the wicker chest; then, cut to the closed chest bouncing down the steps; and finally, cut to the the chest again, opening it to reveal the character. It’s a simple formula that’s been used for well over one hundred years, such is the magic of cinema combined with the logic of editing.

Would such a conventional method suffice for Vidal, who needs his film to be, for some reason, even more authentically violent? His crew warns him of the dangers inherent in the shot, but when the chest tumbles down the concrete stairs, it appears that poor Edmond was in it all along. It’s “improv,” declares Vidal. The actor is dazed. “Can we go again?” asks the director. The answer is clearly no as Edmond collapses, crew members call for an ambulance, and the camera cranes skyward where Mira-as-Irma in her catsuit guise gazes across the Parisian horizon, as if a plague or spirit over the production.

Edmond’s careening down the steps is comic enough, as is Vidal’s reaction, but the scene speaks to a more serious issue in a post-Rust industry. The lapse of on-set safety measures there cost director of photography Halyna Hutchins her life and seriously injured another. It’s not the first such incident: Camera assistant Sarah Jones was killed on the set of Midnight Rider. Vic Morrow and two child actors were killed on the set of Twilight Zone: The Movie. Just recently, Sarah Polley said her life was endangered on the set of Baron Munchausen. Tom Cruise may garner accolades for doing his own stunts, but filmmaking can entail great physical risk, and here fictional director Rene Vidal is clearly putting his actor Edmond at great physical risk.

Is Edmond a dead man? Or will he (and the fictional character he’s playing) feature in a “Dead Man’s Escape”? Did Assayas play us with the editing and only “suggest” Edmond tumbled down those concrete steps” Will Vidal’s production continue despite its increasing endangerment of its cast? Will Mira find focus in her character? Can she find focus in her life, given her failed relationships and the ongoing attention from those around her? Will the ongoing dissension between director and cast culminate in something other than the cohesive fulfillment of a unified aesthetic vision? And for that matter, is Vidal’s film a film or a series?

So far Irma Vep—that is, this 2022 HBO series directed by Olivier Assayas—is great fun with plenty to think about. More than merely a spectacle of on-set shenanigans, Assayas is asking us to think through the big questions about the art form, all the while keeping us entertained with his colorful cast of characters and their chaotic relationships.