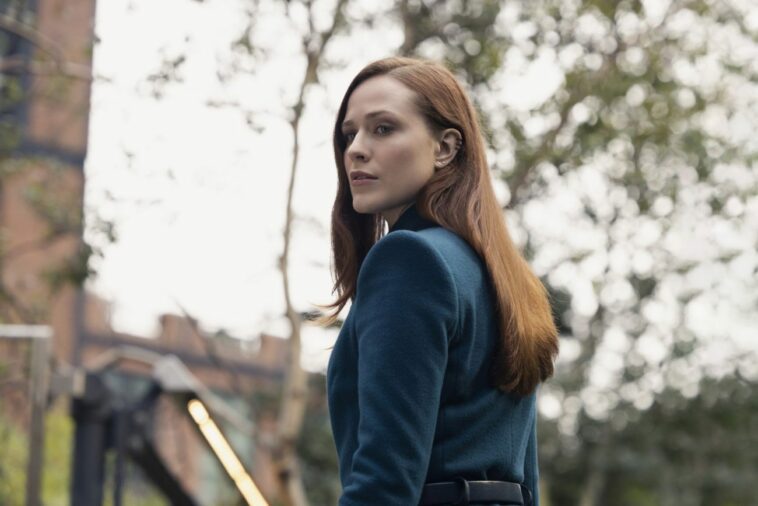 The following contains spoilers for Westworld S4E1, “The Auguries” (written by Lisa Joy & Will Soodik and directed by Richard J. Lewis)

Westworld is not concerned with holding your hand and walking you through the show’s narrative, and I suppose it was never concerned with that. If you couldn’t wrap your head around the multiple chronologies in Season 1 and Season 2, you might’ve been glad that Season 3 was so straightforward.

I’m here to tell you that things don’t seem so straightforward anymore.

The Season 4 premiere of Westworld, titled “The Auguries,” takes the threads from the past three seasons and takes things up several notches, widening the scope of the world of the show to such an extent that I can now comfortably call the show epic. I mean, the show always looked epic, with its scenic cinematography, gorgeous music, and truly outstanding special effects, but the story itself seems to be entering its final chapter, meaning there are now clear heroes and villains.

When we last left (arguably) the show’s main characters, things were really left up in the air. Dolores and William met their ends, Bernard went into the Sublime (essentially the afterlife for hosts), “Charlotte” (a copy of Dolores who very much has a mind of her own) turned into the series antagonist, and Maeve and Caleb were left to save the world.

Now, as I’ve said, Westworld can be a bit complicated, to say the least. As Season 4 begins, it’s reasonable to suggest that newcomers will most certainly be lost, most likely asking themselves, “Wasn’t this show about robots in the old west?” Of course, regular viewers know that was never true, and at this point, this show is really for them.

From the beginning, Westworld has utilized the premise above to tell stories about identity, free will, and society. Though the maze-like structure of the series might confuse people, taken as a whole, Westworld is fairly clear in its intent. It is a science-fiction show about a group of beings known as “hosts,” robots designed for the pleasure of humans (whatever that pleasure may entail), who begin to break free and fight back against those who enslaved them.

This seems to be what Dolores (Evan Rachel Wood) wanted in Season 2 and Season 3. However, when the Season 3 finale came to a close, it was clear that Dolores actually wanted peace between humans and hosts. Gone was her need to punish those who put her and her kind through hell in Westworld, as well as the various other adjacent Delos parks, like Shogunworld. Thanks to Caleb’s kindness and decency, Dolores was able to see the truly good aspects of humankind.

Before she was killed, Dolores was also able to convince Maeve (Thandie Newton) of this good, making her the new series hero. And if this episode is any indication as to what Season 4 has to offer, I can definitely say that I am in. Maeve is such a badass, and Thandie Newton plays her so well. There’s an action sequence in the middle of this episode that is so well made that any preconceived notion of what a television action sequence is supposed to look like has vanished from my mind. It looks expensive and is awesome.

Before that, though, there’s the opening of “The Auguries,” with the host version of William (Ed Harris). It is deliberate, still in keeping with the show’s slow pace. He (and we can assume Charlotte) want the Hoover Dam (as well as surrounding land) for…something. We’re not told, but we are shown the lengths they will go to get it. And, man, those bugs (possible nanobots) are creepy, and I suppose that’s one way to take over the world. Just take over humans and get them to do what you want. After all, that’s what humans did to hosts for so long.

It’s always interesting to have a villain you can understand, and I understand the hatred Charlotte (Tess Thompson) feels toward the human race. She seems to not have the time, patience, and care to see the nuance, that humans are not all alike and that some are good, decent people.

Speaking of good, decent people, when we meet Caleb (Aaron Paul) again, it has been several years since the Season 3 finale. He’s back at work, but he also has a quiet home life with a woman and daughter. He seems relatively happy, if not paranoid, waiting for something bad to happen. His wife doesn’t care for this kind of conduct, and while I understand that I also can’t help but side with Caleb here. Bad things have happened, and it’s possible Caleb has told her everything (though maybe not). If so, she should understand his behavior.

Regardless, their daughter is the most important thing to both of them, and it’s clear they love one another and just want the best for all three. Following the action sequence I mentioned above, where men in tactical gear and guns storm Maeve’s middle-of-nowhere cabin, the episode kicks into gear.

Though a majority of Episode 1 plays a bit of catch-up, it ultimately moves at such a pace that I had to watch the episode twice to make sure I absorbed it all. In fact, so much happens in this episode that Bernard doesn’t even make an appearance. Instead, we get to see where the rest of our leads are now.

Maeve and Caleb have separated. She’s secluded, and he’s a family man. Charlotte and William are up to something nefarious, but it’s unclear. That leaves Dolores. Except that’s not Dolores. She died, permanently, at the end of Season 3. So, who is this dark-haired person who looks exactly like Dolores?

She’s a writer, and since this is Westworld, she doesn’t simply sit at a desk with either a pen and paper or a computer and keyboard. She speaks and small holograms appear, essentially allowing her to see rough versions of her creations. (It’s pretty sweet, and I would love that technology to not only exist but be available and inexpensive.) This new Dolores shares an apartment with her best friend, played by Oscar-winner Ariana DeBose, who is always a sight to see. Their dynamic takes their scenes into romantic comedy territory, and though it works for me, I do wonder if there is a reason the moments between the two are exactly like that.

In fact, Dolores’ entire storyline in Episode 1 doesn’t really gel with everything else. Her scenes seem lifted from somewhere else. They’re shot the same, the music is the same, and the performances are in line with the rest of the show. Something feels off, though, and that’s not negative criticism.

This episode gives me Lost Season 6 vibes, but without knowledge of where things are headed, that’s pure speculation on my part. I couldn’t help but think of where that show went in its final season, and honestly, it wouldn’t bother me if Lisa Joy, Jonathan Nolan, and everyone else involved are planning something similar.

When that last shot of the episode happens and Teddy enters the frame as the music swells, I couldn’t help but think that Dolores’ story is an alternate timeline, perhaps even The Sublime, which makes the comparison with Lost even stronger. Heck, there’s also the title of this episode, “The Auguries,” which could mean predications or those who predict. Either way, could this be implying that some of what we’re seeing in this episode takes place in the future, like how the flash-sideways in the final season of Lost were after the main narrative of the show? It’s all just a theory at this point.

There’s also the added element of Dolores’ stalker, whose voice sounds so familiar. I don’t think it’s anyone from the show, but I know that voice. Regardless, having that component present in what could be Dolores’ afterlife makes my theory a little flimsy. For the time being, though, I’m sticking with it. (Dolores even looks at herself in the mirror twice in this episode, a recurring motif in Lost‘s final season.)

And I’m happy that I’ve stuck with the series as well. I admire the story that’s being told, and all I can do at this point is hope the creators of the show stick the landing. While it’s not as straightforward as it was in Season 3, Westworld has managed to return to its multiple narrative roots, without making things confusing for the audience. It might take time to figure out Charlotte and William’s plan, as well as find out just when (or where) Dolores’ story takes place, but it feels like we’re nearing the end of this show’s epic story.

I cannot wait to see where Season 4 goes from here.