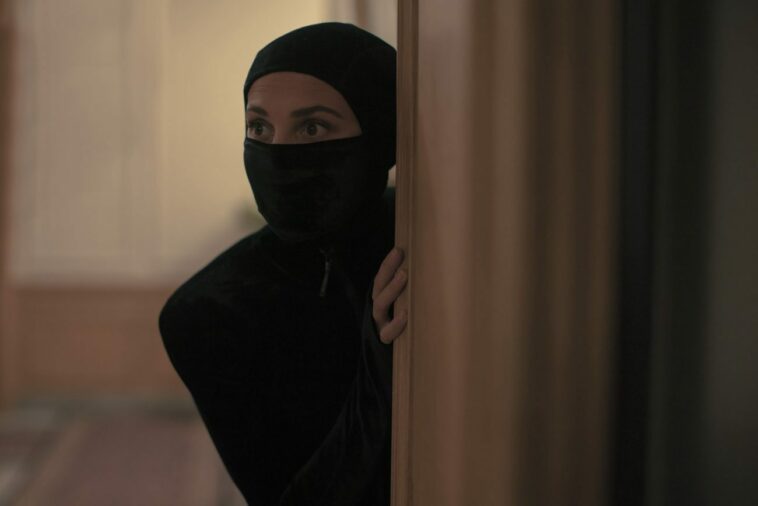 The following contains spoilers for Irma Vep Episode 4, “The Poisoner” (written and directed by Olivier Assayas)

What happened to Edmond?

At the end of last week’s Episode 3 of Olivier Assayas’s eight-part HBO series adapting his 1996 film Irma Vep, the actor (played by Vincent Lacoste) passed out, apparently from injury suffered in an on-set stunt. His director, René Vidal (Vincent Macaigne), seeking an authentic representation of violence, had had the actor tumble down several flights of concrete stairs in a wicker trunk.

Or certainly so it seemed, as Edmond emerged dazed and confused after the fall and the crew called for an ambulance.

Yet in Episode 4, “The Poisoner,” there is no mention of the incident and Edmond seems his normal self—agitated by his felt lack of prestige and character motivation, as usual, but not at all suffering injury or feeling endangered.

I don’t know it that’s a lapse in Assayas’s continuity or if there is some trickery afoot. But it sure seemed, given Vidal’s increasing obsession with realistic, even “cruel” on-screen violence and his willingness to endanger his cast, that Edmond’s injury would impact production, concern his insurers, or at least be addressed in the next episode.

But it’s not, and we’ll have to wait to see if it ever will be. “The Poisoner” begins with a huge set piece, a re-creation of a lavish ballroom scene from Feuillade’s Les vampires in which The Vampires, led by Irma Vep, inject a noxious gas through the vents, poison the guests, and then pilfer their jewels. It’s a complex production with dozens of extras, a big-shot special cameo appearance, and a stand-in for Mira in rehearsals.

And there is an important on-set visitor, Gautier de le Parcheminerie (Pascal Gregory), to persuade Mira (Alicia Vikander) to sign a contract to promote the perfume Dreamscape, an deal that will pay handsomely but obligate Mira to a long series of promotional duties. “Real business,” he calls it. “Not cinema.” It’s clear his company has financed Vidal’s production, and Gautier expects satisfaction—both from Mira, with whom he has an established business relationship, and from Vidal, whom he clearly mistrusts. Gautier suggests viewers may not find Vidal’s new Irma Vep “bingeworthy,” and leans on Vidal to pressure Mira to sign the contract.

Gautier’s task complete, he does not stay to watch the scene. Vidal, as ever dismissive of on-set safety concerns, asks his crew to “graze the heads” of the actors with the camera. The scene unfolds with the poisonous gas sending the partiers into a panic before all succumb and the Vampires, led by Mira as Irma Vep, enter the ballroom to begin looting. So far, this episode’s title, borrowed like others from Feuillade, seems clear: Irma Vep in Vidal’s film is “The Poisoner.”

Perhaps the title is meant to be taken at face value. Or is someone or something else a “poisoner”?

Later, in her dressing room, Mira continues discussions with her L.A.-based agent, Zelda (Carrie Brownstein). Zelda wants to make Gautier sweat and Mira to sign on to the high profile, big-budget Silver Surfer film she’s been negotiating. Mira says “no,” clearly and emphatically, to the project, but Zelda dismisses Mira. Let’s say Mira signs for $20 million—a low, but not unheard-of, take for a female actor in a big-budget blockbuster—Zelda stands to make some two million herself from the deal. Mira’s stardom is a commodity that benefits not just herself but her agent, the Irma Vep production, Gautier’s company, and others.

When later Mira discusses the deal with her assistant Regina (Devon Ross), Regina tells her Mira is a star who can “do what she wants.” Mira replies she is a star precisely because of deals like Gautier’s and films like the Silver Surfer project. That’s not a brag: it’s a lament. Mira feels, as she said in the prior episode, “unfocused,” and wants to step away from her stardom. She later tells Zelda, in an exchange of DMs, she’s gaining perspective from the project but doesn’t have “peace of mind.” I’ve a feeling Mira will find stepping away from stardom brings its own complications—for herself and for others.

Back on the set of Irma Vep, locations have been moved to an exterior shoot for a scene in which Gottfried (Lars Eidinger), playing the character of the villainous Vampire-rival Moreno, follows the Vampires’ getaway. Gottfried refuses to wear a safety harness until threatened with a lawsuit by producer Gregory (Alex Descas). He meekly yields and the scene has him on the roof of the Vampires’ getaway car, rousting through their loot and poaching jewels for himself. He leaps off the car safely along with his spoils. No one is hurt—this time.

As filming of Vidal’s Irma Vep continues, I find myself, just as I had been with Assayas’s 1996 film, eager to see the result of the production. Vidal’s so far appears to be a weird brew of silent-cinema tropes, Victorian melodrama, serial cliffhangers, and modern cinematography. It’s difficult, if enthralling, to imagine just what the final product—if this production ever reaches fruition—might be. Perhaps HBO can release that series as well. I’d be game to watch! (In the 1996 film, by the way, Vidal, played by Nouvelle Vague icon Jean-Pierre Léaud, ultimately scrapped much of his shoot for an experimental, non-narrative, and decidedly non-commercial Brakhage-inspired work of avant-garde surrealism.)

To play the role of Lily Flower, a new actress arrives in Paris: Cynthia Keng (Fala Chen), whose unassuming demeanor echoes Maggie Cheung’s in the opening scenes of Assayas’s 1996 film. Dressed in an ostentatiously sexy maid costume with long spike heels, Vivian’s role in Irma Vep is to be hypnotized by Moreno. Mira, meanwhile, dons the catsuit and again immediately inhabits the feline grace of her Irma Vep character, as suddenly the experimental film Assayas’s Vidal had made in 1996 flashes across the screen, featuring a stylized montage of Maggie Cheung cavorting in her catsuit across Parisian roooftops. Assayas’s freewheeling associations between Les vampires, his 1996 film, this 2022 series and the films-within-films of both may not make logical sense, but they are never short of intriguing.

And they continue to grow more complex: as it turns out, Vidal is dreaming. He awakes, feverishly, and then wakefully hallucinates a visit from his former wife Jade Lee (Vivian Wu), who ostensibly starred in his earlier Irma Vep film. (His fever dreams seem motivated by Vivian’s arrival and Mira’s catsuit.) Distressed, he calls Mira to visit him: though she’s wary—as a young female star might be of a barely-clothed, obviously distressed director—the two talk through their issues amicably. “Who am I to tackle the work of Louis Feuillade?” he askes. “Why touch it if nothing I do can approach it?” His ex-wife’s visit has left him doubting himself, and he tells Mira: “Only you can save it.”

Mira is clearly made uncomfortable by his dependence, but it rings true: his Irma Vep does appear to hinge upon her participation and performance. She is, after all, the star.

The episode features one more sequence on the set of Irma Vep. Edmond, completely unscathed from the staircase incident, grouses about not having a personal assistant. Mira, meanwhile, looks fabulous in drag while once again adopting a disguise for The Vampires (Feuillade’s serial was full of characters constantly donning guises and adopting ruses). So much so that when Zoe’s ready to shoot her shot, Mira seems to comply. She returns the affection and agrees to a date of sorts, but drops Zoe hard at the end of the night. “Not tonight,” Mira says. “Next time.”

Will there be one? Or is Mira simply taking revenge on Zoe for the curt dismissal her former lover and persona assistant Laurie handed her back in Episode 1? Mira has every right to say no to anyone at any time, but her actions here seem calculated. Her next personal encounter, meanwhile, doesn’t involve the word “no”: she wakes in the middle of the night to a phone call from Eamonn, the former lover who is also on location shooting a different film in Paris. Disconsolate, he asks to visit, and soon arrives, wearing sunglasses and a raincoat. His partner, the famous singer Lianna, has miscarried. Neither could take time from their careers to grieve with each other, and so here he is, in his ex-lover’s hotel suite.

Mira says the same happened to her, much earlier. The two embrace, and Mira touches, then kisses, then strides atop Eamonn as the episode concludes. It’s hard to imagine a scenario in which grieving a miscarriage by immediately having sex with a former lover (and not the mother-to-be and current partner) works well for anyone involved.

Will the next episode address the fallout of Mira and Eamonn’s reconnection? Will Mira’s flirtation with Zoe, or Regina’s crush on Mira, continue? Has there been any fallout from Edmond’s Episode 3 incident, or was that scene somehow a ruse? And how will Vidal’s series progress, with the threat of pulled financing and the dissatisfaction of his cast both mounting? Olivier Assayas may have more than a few questions to address as Irma Vep begins its second half of its eight-episode run, but with its first four episodes this series has continued to beguile and bewilder just like its famously eponymous character.