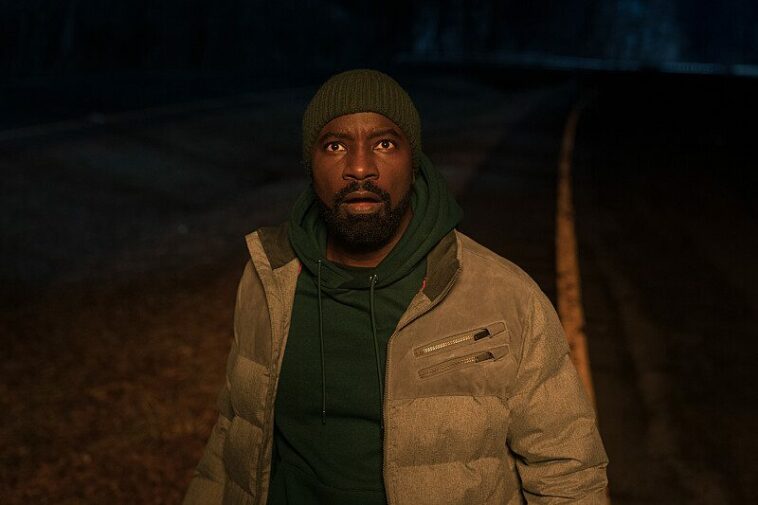 The following contains spoilers for Evil S3E4, “The Demon of the Road” (directed by Peter Sollett and written by Dewayne Darian Jones)

What a banger of an episode! Evil S3E4 “The Demon of the Road” has everything: It’s genuinely scary, the faith debate weighs heavy, and our core trio gets some excellent development. It’s a tightly written and directed episode, and my favorite of the season so far. Director Peter Sollett also helmed a couple of my favorite episodes from the first season, including the incredible entry with David in the hospital grappling with demons, and his skill holds steady here in what sort of amounts to the most terrifying episode of Scooby-Doo I’ve ever seen.

This week’s case focuses on Jason, a long-haul trucker who hasn’t been the same since he blacked out and lost several hours of his memory on a specific stretch of highway. Just before that happened, he saw something flying behind him, not passing, and a shadowy figure seated in the cabin. After speaking to Jason, the trio notices what appears to be a sigil on the fender of a truck where Jason now spends all of his time out of fear of hurting his wife through his newly erratic thoughts. Our heroes quickly get to work to find out what actually happened on that highway.

Ben the Magnificent is back to his normal self after last week’s visit to the science club, approaching surreal events with a level-headed analytical approach. But as Ben finds comfort in things having a rational explanation, David finds despondence. Case in point: the angelic spectre seen in camera footage from the young woman prematurely placed on the autopsy table in S1 was the product of an image editing app. The disappointment in David’s eyes is palpable and even prompts Kristen to point it out. David’s faith continues to be tested, and as Sister Andrea promised, the doubts are getting more invasive.

The trio visits a diner that Jason doesn’t recall visiting, but had a receipt for on the day of his blackout. There, a trucker tells them about the Ghost Highway, a long stretch of highway after Exit 13A that all truckers avoid because of the strange things that happen when they travel it. So of course, we’re going to hit the road and find out for ourselves.

Another reason why I loved this episode so much is because of how well-balanced it is. Sure, it has plenty of hair-raising moments, but there are also some of the smaller, sweeter moments that make Kristen, David, and Ben such a wonderful trio. Ben locates his mother’s favorite song: “Happy Together” by The Turtles. The song’s sentimental value comes from a CD being stuck in a used car Ben’s family bought years ago, and that song was the only thing they could listen to. As the song launches into the main chorus, the three join in along with it. It’s just a great little moment that also pays off in how it lowers the tension before sending it into the stratosphere.

I was taking a sip of beer when it happened—a bloodcurdling scream coming over the radio. A half-full can of beer very nearly got chucked across the room as I leapt a foot out of my seat. It’s one of a handful of great jump scares in the episode, as the radio blasts demonic laughter and strange snippets of dialogue, with the channel setting to 666 and specifically calling out Ben by name. What’s more, David notices something flying behind them: two red lights flying high above the road, clearly in pursuit. The car shorting out, Kristen seeing something in the woods by the road–the whole sequence genuinely freaked me out and I’m hoping Evil dabbles a bit more in the genuine horror in the coming episodes.

I hate night driving. Hate it. Especially if it’s in an area I don’t recognize. Late at night, I get some really creepy vibes, so “The Demon of the Road” definitely hit at my paranoia. The scenes of the trio driving down the highway and approaching 13A are incredibly tense, and the things that happen on that stretch of highway are the sort of nightmare fuel that makes me so anxious during night driving.

Kristen sticking up for Sister Andrea’s mental faculties last week wasn’t enough to quell a heretical council of priests visiting in an attempt to coerce Sister Andrea to sign a resignation form. Luckily, the Sister won’t go down easily and demands a proper vetting process before she’ll resign. Of course, Leland is the one behind this new attempt to oust her, but the nun isn’t having it, defiantly waving to the demon standing behind Leland.

That brings us to this week’s Kurt Alert: Dr. Kurt has been asked to provide a psychoanalysis of Sister Andrea and her visions which the archdiocese is attempting to label as mental illness. The therapist is disappointingly spinless in how he attempts to deny visitation from his own demon, who will from here be known as the “Snoot Booping Demon” since his appearance last season. (Later, when the Church tries to angle Kurt to oust Andrea, the nun reminds him of his visitation by booping his nose again.) We also learn during this exchange that Sister Andrea has been seeing angels and demons since she was 15, which all but refutes the claim that she’s suffering from Lewy Body Dementia.

Jason disappears in the middle of the night, so David sets out on his own to find him. Once again, right when David passes Exit 13A, his attempt to reach Jason is interrupted by screaming from his phone and his radio, and once again I am nearly launching myself backwards across the room in surprise. The real holy-crap moment is immediately after, when the source of the glowing red lights is revealed to be an actual demon, right in front of David. When the demon is chased off by the sudden appearance of an angel, David is understandably shaken, and he asks Sister Andrea how one knows whether a vision is from God, or something else. The man is really on shaky ground, and the second half of the season is probably going to be rough for him.

The jackass from last season that Kristen smacked with a bag of frozen veggies is on Kristen’s porch, demanding an apology. Kristen does so, though her daughters are disappointed in her, and Lexi in particular wants to know why “boys can do whatever they want.” The change that Kristen undergoes following this, as well as a conversation with Sheryl, is a delight. The contractor renovating her house attempts to strong-arm her into early delivery of a second check, and Kristen’s verbal beatdown is almost as satisfying as her willful destruction of the unfinished house extension as she calls the contractor’s bluff when he threatens to demolish the work he’s put in if he doesn’t get paid. Badass Kristen is back, and she is so unrestrained for the rest of the episode that she’s actually intimidating.

It turns out that the Ghost Highway actually was just a guy with a drone disrupting radio frequencies–once again, a clout chaser responding to “Ghost Highway” internet posts, as a furious Ben calls out. It turns out that he’s broadcasting at a specific frequency known to cause hallucinations–which of course causes David greater distress as to whether what he saw was an actual spiritual event or it was just a radio frequency vibrating his eyeballs. This is where Evil is at its best–that discomforting feeling of not getting total closure, those complete answers to what is behind the curtain.

A couple of weeks ago I was excited to possibly get LeConte on the team, but this week took him in a direction significantly better. He reveals to David that he has been following him for some time, including the night when the team uncovered the source of the Ghost Highway. He also congratulates David on helping eliminate one of the Demonic Families: the man whose equipment Kristen destroyed at the site of the drone operator was the successor of one of the Families and took his own life after they left, ending the line of succession. When David accuses LeConte of killing the man, LeConte replies with a toothy grin and a denial. LeConte is gaslighting, I’m sure of it. And for some reason, it’s not at all reassuring when after David asks what happens when all of the Demonic Families are eliminated, LeConte responds with “Peace on Earth.” Naw, fam. I doubt that very much.

Evil just keeps getting better. I know I literally can’t shut up about this show, but for how often I fall off of shows that lose my interest, Evil has a staying power that makes me excited to check in every single week. “The Demon of the Road” was an incredibly satisfying episode that delivered on the fun, the scary, the character building, and the lore. I have no idea where the season is going to go from here, but the consistently high quality of the season so far just makes me more excited for next week.

Evil is streaming Sundays on Paramount+