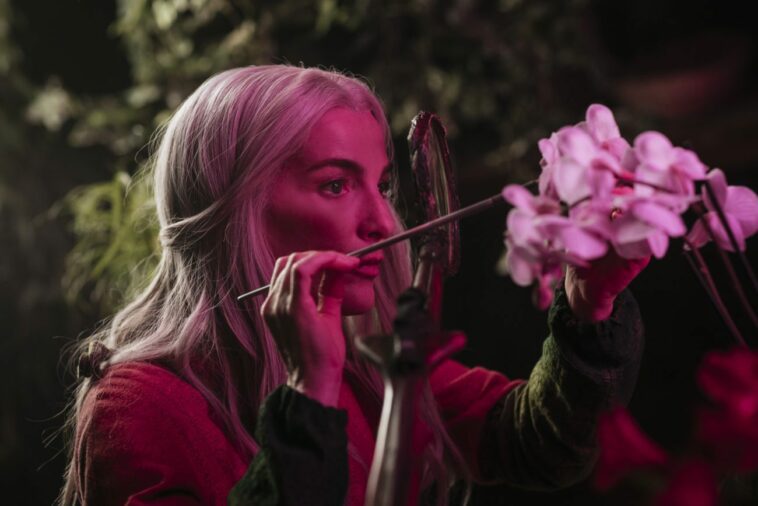 Through two episodes of Moonhaven, the biggest question in my mind is whether the society/culture created on the Moon is actually good. Most things point me in the direction of thinking that it is, though I’m jaded enough I also relate quite a bit to Bella as she quips about it being a cult. But insofar as the structure in place discourages egoism and acknowledges negative affects while devoting itself to helping people overcome them, it strikes me as indeed a vision for a possible better future.

It’s interesting that the Mooners are not coldly rational, and employ descriptive language for emotions we might infelicitously name, as when they talk about their noggins swirling and such. It risks being a bit cheesy, but there is also something to it. The dreadfeel doesn’t strike me as a science fiction idea so much as a name for an intuitive human capacity, vague in its outlines, to sense when someone we care for is in peril. Maybe there’s more to it than that in Moonhaven, and things are bolstered by technology—these people do all have implants in their spines after all—but it works nonetheless to the extent that I’m not sure such an explanation would be required.

In S1E2, Paul and Lone take a moment to gaze into each other’s eyes, and there’s a name for doing this of course, but that’s not what’s important so much as the mutual recognition involved in the action, and that this is part of IO’s system for humanity. It may not be “rational” to think about how we can connect with one another through sustained eye contact, but it’s an important part of being human. We communicate more nonverbally than verbally, and though I question things like the dancing, or the drum circle we see here in “The Detective,” it’s making me think about whether it’s a coldness on my part, and whether that coldness stems from my pain.

Further, the society in place clearly aims to move beyond base desires for things like revenge. Asus chastises Paul and Arlo as they investigate Chill’s death for seeking answers instead of doing their real job—helping the living to heal—and while we might chafe at this, along with the chemical smoothing over of grief through the use of the Bright, we should also take the opportunity to ponder the value of notions of retribution. If it’s an attempt to pay things back and make them right, we have to recognize that it never really does. The debt doesn’t quite get paid through the joy taken in the suffering of the wrongdoer. It’s just more pain, and potentially a quagmire of pain.

The question is whether a program that goes entirely in the direction of restorative justice (which would seem to be what we get on Moonhaven) misses something important that goes beyond schadenfreude.

At the same time, the notion of debt has not been erased from the culture of the Moon. In a certain register, one could argue that it should be, as it can feed right into the desire for payback, but it also gets at something fundamental in our relations to one another—that we (at least sometimes) owe things to each other. And it does seem that in Moonhaven, this too is spun in the direction of healing and restoration.

Equally, the idea that “they are us and we are them” cuts against any notions of tribalism, but here we definitely see some cracks in the edifice arising, as Maite stakes out a more divisive position, telling Indira not to blame things on the Moon that are the fault of Earth. Perhaps the idea of dissolving the council is a bridge too far in terms of what a human being can stomach when it comes to a communitarian spirit, or maybe there is something else going on.

Is the problem in Moonhaven going to be intrinsic to IO’s plan, or the result of some taint stemming from Earther influence?

Moonhaven S1E2 ends with Bella and Paul viewing a recorded message from Chill, which sheds some light on the opening scene of “The Pilot.” She says that the Bridge is a trap and they were never going to save the Earth. Of course this leaves the question of what she and Strego were going to do, what caused their disagreement in the woods that night, why he killed her, what the thing was she had in her hands, what Strego ultimately did do, why he told Tomm about it, and why Tomm proceeded to shoot him dead after he told Tomm about it.

That’s a lot of questions, and the closing of “The Detective” adds another, if we take Chill at her word: If the plan is not to save Earth, what is it? We can only speculate, but I’m afraid I’m not coming up with interesting theories. Maybe let me know yours in the comments.

I suppose my hangup might be in the assumption that the nefarious plan Chill alludes to is ICON’s, while S1E2 provides some indications that it could be that of Maite (and presumably others). She bluntly refuses to cede her seat the head of the council, and even threatens to muck everything up with regard to the Bridge if Indira pushes it, so it’s eminently possible that she’s the one who has no intention of helping Earth at this point. (Though we might note Chill says they were never going to help Earth).

We’ll have to wait until (at least) next week to find out.