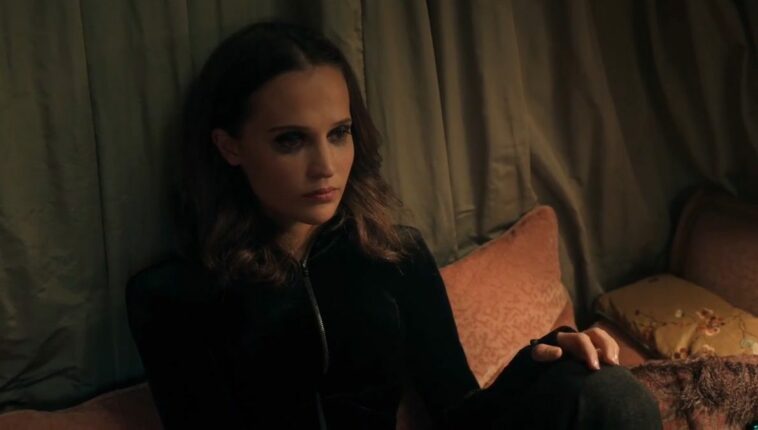 This deliciously funny, occasionally frightening, and often thoughtful series is reaching a boiling point, and I’m going to miss it when it concludes. With this week’s and just two more episodes to go, Olivier Assayas has set in motion multiple plot lines converging as the production of Irma Vep helmed by director René Vidal (Vincent Macaigne) and starring Mira Harberg (Alicia Vikander) borders on chaos.

So too, I might add, does Assayas’s series. Last week’s episode concluded with a rueful Mira contemplating a simpler time, The Kinks’ pastoral “Village Green” echoing her plaint that Paris and Irma Vep are “not my world,” as she said. This week, that reverie is gone, but the action continues, with Mira in costume as Musidora, the early-20th-century French actress who originated the role of Irma Vep in the 1915 series Les vampires, directed by Louis Feuillade. On set, Mira seems to fall into a fugue state of sorts, before director René arrives.

He startles Mira, who holds her prop gun aimed at the director for an uncomfortably long time. René, in fact, tells her so—much to my relief, as the gruesome tragedy of the shooting on the set of Rust just last year seems so, so similar: an actor holds a gun pointed directly at a member of the crew. Fortunately, there’s no on-set injury, just an existentialist conversation between star and director. Mira imagines herself an agent of chaos, just like Musidora’s original Irma Vep, and he asks if she believes in what she cannot see. Their discussion—guarded as a consequence of the prior episode’s conflicts—segues into one more about the cinema’s dreamlike qualities, a notion long held by film theorists linking the late-19th-century’s birth of cinema to the beginnings of modern psychoanalysis at nearly the same time.

Whether the scene that’s just unfolded is “real” in this series’ universe, René directs Mira through their recreation of the murder of the Grand Vampire, as played by René’s rival Robert Danjou (Hippolyte Girardot), just as imagined in the prior episode—with the exception, perhaps, of René then comically directing Mira to jump directly on the supposedly-bullet ridden corpse while in her heels. He’d love to see a spiky heel come down on his adversary’s naked throat!

Throughout his Irma Vep, Assayas has mined these moments for giddy physical humor, often using his fictional stand-in René Vidal to endanger the cast, particularly Edmond (Vincent Lacoste), dangling him from a rope by the neck and knocking him down a set of concrete stairs in one prior episode. Once the scene is complete, the director has a full-on freak-out, banging cameras, pounding walls, and shouting “Dammit! I’m done with this film!” Given that he’s just finished a new scene accomplishing exactly what he wanted—dispatching rival Robert from the set, and with him, any challenge to his authority—René’s tantrum seems excessive, and Mira punctuates it with a finger-gun to her own head.

Is René indeed done with this film?

So it would seem that he is, as the director disappears, refusing to answer texts or calls from his worried producer Gregory (Alex Descas), who hopes to solve the problem before it becomes a bigger one. But soon, studio higher-up Angus (Stéphane Roger) and financier Gautier (Pascal Gregory) take matters into their own hands. First, they hire Herman (Byron Bowers), the hot director of Mira’s superhero franchise Doomsday (and now-husband of her former lover Laurie), to replace René—even though the two are “polar opposites” in their directorial styles. And then, even more surprisingly, they enlist Mira’s personal assistant, recent film-school graduate Regina (Devon Ross) to take the reins for the interim. Schedules and insurers, it seems, can’t wait.

Meanwhile, René is not the only member of the Irma Vep production who is AWOL. Ever-impulsive Gottfried has hung himself, attempting autoerotic asphyxiation, and may not survive: the odds are 30/70, maybe only 25/75 that he’ll make it through the night, much less be ready for tomorrow’s shoot. But by the next scene Gottfried awakes from his coma, clambers out his hospital window clad in his robe and cowboy boots, and staggers his way to Cynthia Keng’s (Fala Chen) apartment, where a shower, a water, and a banana soon have the actor back to full health. “Now I feel fit as f*ck!” he exclaims, grinning widely.

René resurfaces too, but only in his therapist’s office, looking disheveled. To him, it was a mistake to take on the Irma Vep project. He believed making “this eight-hour-long” film (he still refuses to call it a series, or worse, as Laurie later does, a TV show), would bring him redemption, but instead, “it only opens old wounds.” His therapist understands exactly why René was so enraged at Robert, who challenged his authority: “He thwarted your desire,” she concludes. “Of course you hate him.”

And René’s Irma Vep indeed seems to be—at least to him—all about desire. It’s the desire that led him to fall in love with his first star, Jade Lee, who visited him in his dreams in Episode 4, and it’s the desire he wants the camera to convey in the sexually charged abduction scene we saw him shoot in Episode 5. For René, cinema is personal, an extension of his personal vision, following in the tradition of the Nouvelle Vague and Alexandre Astruc’s notion of le caméra-stylo. “Ghosts have very little to do with the dead,” he says. “They’re more about what’s alive inside us.” While he’s speaking of his visitation by his former (and by the way very much still living) star and spouse Jade Lee, what he says might apply every bit as much to the spirit of Musidora’s Irma Vep and her influence on Mira.

René might approach cinema as the personal expression of le caméra-stylo, but he may be the only one to see the project that way. Certainly, Gautier understands the project quite differently: it’s a vanity vehicle for his star/property, an investment he needs to pay off. For producer Gregory, it’s a task, a complex balance of spreadsheets, legalities, reservations, and obligations. And for young Regina (Devon Ross), just out of film school with a headful of avant-garde ideas, it just might be a chance to put her own personal auteurist stamp on the production with René out of commission, if only for a day.

Certainly, Mira’s personal assistant is prepared. She has her inspirations, a copious set of notes, storyboard sketches, and a vision for the scene she’s assigned to direct. If René seems to fly by the seat of his pants on set, encouraging experimentation and multiple takes, Regina’s is more deliberate, intentional and orderly. Unfortunately, we don’t really see just how her day in charge unfolds, as instead we’re treated to more behind-the-scenes from the days of Musidora and Feuillade on the set of the original Les vampires, where extras were paid double to take on the hazard of an on-set explosion.

These scenes re-enacting the making of Feuillade’s original are every bit as much a treat as are those set in the current day. Here, Assayas has added an entirely new level of complexity to his series, comparing past filmmaking practice with present. A new “Grand Vampire”—ostensibly the “Thunder Master” of the episode’s title—has brought out a massive cannon to disrupt the grand ball where Moreno and Irma are dining. Feuillade, played by Macaigne as René’s double, likewise endangers his cast: Musidora is stunned by the blast and Moreno’s portrayer deafened. (There’s no evidence to suggest that the actor Fernand Herrmann actually was.) “Triple pay for the wounded!” exclaims a smugly satisfied Feuillade.

The episode concludes in the present day, once more with Mira wearing the Irma Vep catsuit. She’s been messaging Laurie, her former assistant and lover, who shot her down hard in Episode 1. And like in prior episodes, wearing the catsuit means becoming, apparently, possessed by it and the spirit of Irma Vep. “You have to let Irma Vep become you,” Regina had told her earlier. Mira takes to the streets, and in Paris a young woman wearing shades, beanie, a hoodie and a catsuit is hardly worth note.

Taking to the rooftops, she sneaks into the hotel where Herman and Laurie are staying, awaiting his turn to direct Irma Vep. Little does he know his new project’s star, now inhabited by the spirit of Irma Vep, is stalking him and his new wife!

And little did we know, as viewers, that suddenly Mira-as-Irma’s powers would transcend the simple agile cat-burglary we’d seen before. As Irma Vep, Mira can now, somehow, magically “phase” (like the X-Men’s Shadowcat) through walls, slipping into their suite, where she watches as Herman gives Laurie a massively lavish pendant. The married couple briefly discusses work—he likes “big sh*t” he says, declaring his populist artistic intentions, and she dismisses Irma Vep as a mere “TV series” (like one we are watching!)—but somehow can’t help but discussing Mira.

Mira’s power to phase through walls now comes to her with ease, and she watches the two in their bedroom. Even as Laurie is ready for sex, Herman is still asking about Mira! As Mira steals away, she spies the pendant Herman gave Laurie, and just like she has with a credit card and a watch earlier in the series, she takes it; she then ascends once again to the Parisian rooftops, where she strikes a confident pose and the episode concludes.

With two episodes left, Assayas has left much to resolve. Can and will Irma Vep conclude production to its various stakeholders’ satisfaction? If so, how, and with whom in charge? Will “big-sh*t” Herman, film-school Regina, or desire-thwarted René be at the helm, and whose aesthetic will the final project reflect? Will it reach theaters and audiences, and to what degree of success? On a more personal level, will Mira reach some resolution in her interpersonal relationships with Laurie, Regina, Zoe, and/or Eamonn?

Or will the spirit of Irma Vep further wreak as much havoc in the characters’ personal lives as it already has on the set of René’s apparently-ill-fated project?

With stellar performances from Vikander, Macaigne, and Eidinger (as well as the rest of the cast), a whipash-wild ride between the past and present of cinema, and constant blurring between the real and the imaginary, Assayas’s Irma Vep has so far walked a dizzying tightrope act. Let’s hope its last two episodes deliver the goods!