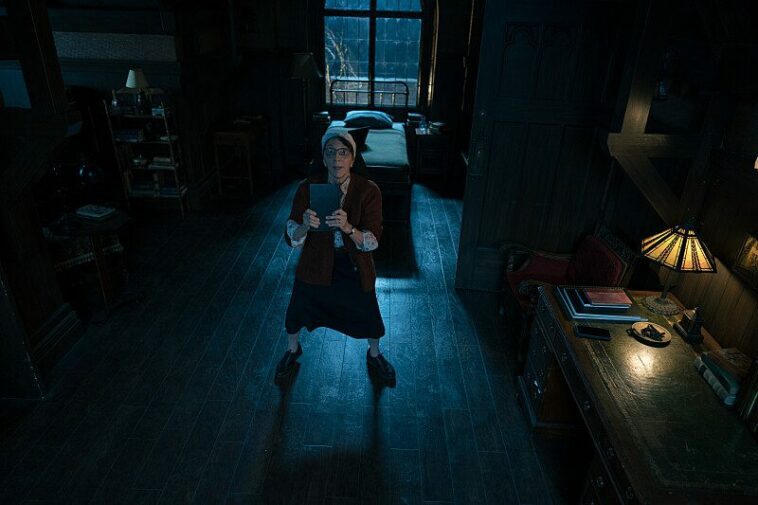 The following contains spoilers for Evil S3E6, “The Demon of Algorithms” (directed by Peter Sollett and written by Patricia Ione Lloyd).

We’re officially in the second half of Season 3 of Evil, and if the rest of the season slaps as hard as S3E6 “The Demon of Algorithms” does, I’m going to start running out of people to enthusiastically recommend the show to. This week, the show takes aim at social media, and specifically at how it can be manipulated.

The latest in Evil’s silly little adjacent versions of existing apps is VidTap, which is almost literally TikTok. There’s a new trend spreading across VidTap of people recording themselves in a possessed state. These videos are by turns funny, weird and occasionally feature a cheeky jumpscare. Given that Evil has played the “ooh, spooky technology!” card several times, it’s pretty easy to deduce that there’s probably nothing supernatural going on here, but that’s a feature, not a bug, of the show: evil comes in all forms.

I really enjoyed the amusing little wrinkle in the main credits this week, wherein as soon as the “Skip” button appears to move past the credit sequence on the Paramount+ client, a message appears at the bottom of the screen “Skip intro and you will be haunted.” It’s not much, but those bits of flavor are always welcome.

We’re not even at the main credits when the first case of “possession” is revealed to be part of a social media fad. The girl saw a magician reciting Latin and chewing glass. She’s done the same and has the mouth stitches to prove it. Ben quickly locates the source of the phrase, which had been repeated in hundreds of other “possession” videos, and sets off on his own VidTap channel to dispel these videos. He shows how the original video was done using sugar glass and fake blood capsules, and debunks other tricks in subsequent videos. Once Ben reveals the secret behind a levitation trick and yells “Oh, look at me! I’m possessed! Look! It only took me five minutes!” I am going to need mini vlogs of Ben debunking things like, yesterday, please.

Cutting through the backlash against Ben’s video, there is a woman who genuinely asks for the trio’s help: Marie, a mother of two sons who have been tormented nightly by an unseen demon scratching them, pulling them out of bed, and generally causing chaos starting at 2AM.

David, Kristen and Ben each find themselves unable to resist the allure of notifications and fresh VidTap content, rolling over in the middle of the night to open their phone and watch more videos. Kristen in particular starts to see videos that show her more of herself that she may not want to accept (“It thinks I’m a mom who drinks a lot,” she says. “Maybe it’s because you are a mom who drinks a lot,” says Ben.) Ben cites the “algorithm,” which as we know from YouTube (but not from Netflix), the program will curate content based on your habits.

Speaking of the algorithm, the Marie case finally breaks when our heroes go to the VidTap HQ where Ben’s friend Katie works. Katie is an adorably quirky, cool character who refers to Ben as Benny the Boy Genius and definitely likes him, and I hope she comes back soon. Anyway, Katie points out how the app draws out one’s darker urges—even if you hover over content for a second longer, the app recognizes that as an interest. She also affirms that the app can only record if someone hits the button, and also provides Ben with Marie’s recording before she edited it in the app. It turns out that Marie is a very sick person who has been setting up these scenarios and inflicting harm and trauma on her kids for that sweet, sweet VidTap clout. In one of the campiest scenes of the season so far, Marie responds to the confrontations by setting her phone to record and promptly freaking out like she’s auditioning for a Conjuring movie. And it gets hundreds of likes. Some things never change.

David’s visitation from Demon Kristen was a really interesting exchange. Demon Kristen is dressed provocatively, but David isn’t having it. Instead, the two have a surprisingly impactful conversation where they weren’t, as far as I could tell, adversarial. Demon Kristen does address some concerns about LeConte and the Vatican Secret Service, but none of her points are far off from any of the things about LeConte so far that haven’t passed the sniff test. There’s definitely something going on with the VSS, Demon Kristen is just providing structure. I didn’t think about it at the time, but looking back it was really interesting: Demon Kristen tells David, “I’m you,” indicating that she’s just in his head (e.g. a psychological manifestation and one of the most troubling ideas David is experiencing). David counters that the VidTap content is leading him into temptation and prompting Demon Kristen. That prompts the question: is Demon Kristen an actual demon, or is she psychological?

Speaking of which, what the hell was that gnarly mosquito demon Sister Andrea saw sucking out David’s brains immediately after? After the confidence of Sister Andrea’s mental faculties from earlier, this is not entirely reassuring. After Bible-slapping the demon away, David suddenly pops up, angrily asking Sister Andrea what was going on. The nun asks David about the demon, and he says he was “just sleeping.” Okay…so why are you fully dressed and not in bed? I don’t know what to make of this, and nothing about this sequence lines up. The only solution I can come up with is that Sister Andrea’s demon visitations are getting far worse, going from seeing a demon in the room to her perception of reality getting warped beyond a simple sighting.

The investigation of Leland’s visits to the school the Bouchard girls attend turn up no evidence of wrongdoing, which of course is not accurate. Kristen is increasingly frustrated and stressed as Leland works to dismantle her life, but the girls decide to try out their own brand of retaliation: they go back onto Bumblebee Valley, the online game Leland had been using to talk to them, dox him and label him a predator. Once again, I applaud the decision the show made to immediately make the girls aware Leland was behind the keyboard, because then we get great scenes like this (and apparently Bumblebee Valley lets your burn down the house of another player, which they do to the abode of Bumblebee Leland). And finally, the Monsignor terminates Leland’s job with the Archdiocese after seeing the dirt, citing liability concerns. Yeah! Don’t let the door hit you on the way out, Leland!

Not an episode goes by where I don’t feel the hole left behind by Peter Scolari’s (Bishop Marx) tragic passing. But with “The Demon of Algorithms,” Boris McGiver as Monsignor Korecki is really growing on me. His blank expression when Ben mentions TikTok and Instagram is priceless, and his relationship with the trio is just tightly wound enough to keep things interesting. And when Leland’s reaction to being fired is a menacing “You’re gonna be sorry,” the Monsignor barely blinks with his response: “It’s a rare day when I’m not sorry.” An absolutely gangster response, especially since Leland has strung him along for this long. Leland is livid, and when he flips his nice glass desk and bellows that he’ll “make four little girls four little orphans,” it’s as scary as anything he’s said so far. I’ll have to go back and see if Leland flipped a desk in S2, because if he did, that makes him 3 for 3 on “I did a Big Angry and flipped a desk this season.”

Looks like the first people to predict that the calls with Andy were probably not legit were right! I should have gone with my gut! The fragmented video and weird, robotic answers from Andy that didn’t seem like they were directly addressing Kristen’s words all go back to Leland and a deepfake he’s assembled of Andy. Then I yelled out loud when our worst fears are realized as it is revealed that Andy is not in the Himalayas, but in fact, him-a-lay-a paralyzed on a shelf in the dungeon room with the jars of people juice or whatever in Leland’s apartment.

I’m making jokes because the pure terror of this reveal just hits like a ton of bricks. The reveal comes after Leland is caught off guard when Kristen wishes Andy a Happy Anniversary over the video call. When Sheryl states that the anniversary isn’t until November, Leland is convinced that Kristen is onto them and was dropping a trap question. Going to Andy, who is paralyzed and mute but able to see, hear, feel, and sort of move his head, Leland informs him that he will be spending the rest of his life in that room and threatening him with torture if he doesn’t answer Leland’s questions. It’s such a freaking sinister turn for Leland, and hats off to Michael Emerson for such an incredible performance that runs through so many different emotions and behaviors. We all know that Leland is a monster, but Andy, God bless him, is the character least deserving of this treatment, which made this so much worse.

Oh my god, dude, this is heating up! It’s a subtle but huge moment when Leland is interrogating Andy and, over Leland’s shoulder, Sheryl is prompting Andy to either nod or shake his head, looking genuinely concerned. Throwing Leland off the trail, maybe? Later, she’s cutting Andy’s nails and telling him that he will be reported dead but his family will get the money as promised. Sheryl clearly hates Andy but loves Kristen and the girls, and is tied to Leland…so where is that going to place her once the lines are drawn? We’ll get closer to the answer next week.