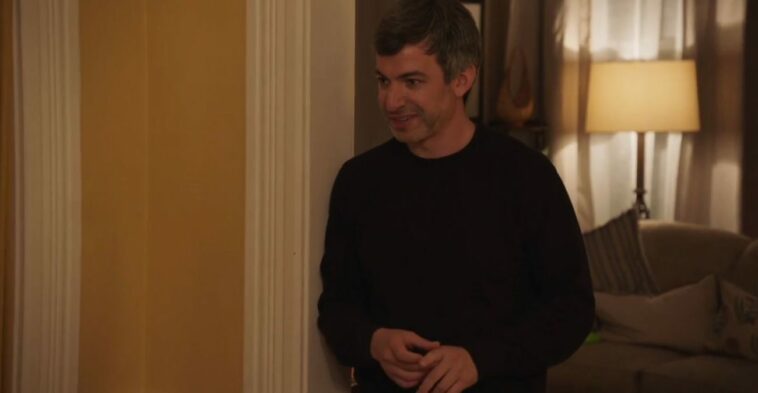 As much as the premiere of The Rehearsal last week may have primed us for a client of the week structure to the show, by the end of S1E2 (“Scion”), it seems pretty clear that we’re in for a season-long arc. On one level, I’m not sure what I think of this. I would have been completely happy with a client of the week show, and I found everything about “Orange Juice, No Pulp” to be immensely compelling. I’m honestly less interested in what happens with Angela than I was with Kor and Tricia, so I can’t help but feel a little disappointment.

On the other hand, S1E2 shows that the ambitions of The Rehearsal are even more experimental and avant-garde than I imagined from the first episode, and that’s exciting. The setup of Angela’s rehearsal is absolutely insane—going through the experience of raising a child by employing a rotating cast of child actors and a crying robot baby to condense 18 years into a course of weeks—and the opening of “Scion” is frankly rather terrifying, as we don’t know what’s going on at first. I’ll admit I kind of thought Nathan was stealing someone’s baby for a moment.

But, of course, everyone in The Rehearsal treats what’s going on as less crazy than it is from an external point of view, and perhaps there’s a general commentary being made here (through the very form of the show) on how we experience reality itself at a certain remove from reality, or rather how all of the distinctions between the real and the virtual continue to break down.

The blurring of the line between the real and the irreal is taken further than before with Nathan entering into Angela’s rehearsal as “the father” as the episode comes to a close. Of course, as he calls the parents of the child actors involved, he reads from a flow chart. Everything has to be planned as much as possible, but in a way he’s also undermining that for himself by entering into the experiment. Though I’m also confident he’ll end up hiring a fake Angela to rehearse for his interactions with the real Angela during their shared rehearsal of raising a child.

I keep talking about “reality” but more than anything The Rehearsal demonstrates how this ceases to be a useful concept.

It seems clear that The Rehearsal is ultimately going to be centered on Nathan’s journey, so I have to wonder to what extent what I said about joining Angela’s rehearsal disrupting his ability to plan everything is even true. This is Nathan Fielder’s show, so did he plan for it to go this way from the beginning? Or did this just happen? When we see him decide to enter Angela’s rehearsal, are we seeing an actual movement within Nathan Fielder’s mind to take him in this previously unplanned direction, or was this the idea from the start?

I honestly have no idea, but you should ask yourself whether you believe what he says in the narration to “Scion” about bringing his replica of the Alligator Lounge across the country and why he did this, as a sort of test of the broader question.

S1E2 clearly could be taking its name from the use of ‘scion’ to refer to progeny, but I have the feeling it actually stems from the story Robin tells about totaling his car, which he repeats multiple times over the course of the episode. The fact that each time he feels the need to mention that it was a Scion that he crashed at over 100 mph slowly ramps up the sense that the guy is a bit unhinged.

At first, he seems perfectly nice and normal. And maybe he is nice. I’m hardly holding it against him that he left Angela’s rehearsal because a robot baby was keeping him awake all night. A man needs to sleep. But there is also the lack of a license plate on his car and all of the weird numerology stuff. I really enjoyed how my assessment of the guy kept taking turns, and the Scion became a joke through repetition without being one at first.

Honestly, Angela is a bit weird herself, but maybe one thing to think about as we watch The Rehearsal is how we all are, and maybe part of the point is to foster some empathy with those far outside of our normal frames of reference. For all his awkwardness, a striking thing about Nathan lies in how he refrains from passing judgment on others.

The “night owl” he hires falls asleep on him instead of doing his job, but Nathan continues to approach him with sympathy and respect. And throughout his exchanges with Robin, he remains more curious about the man’s reasoning than judgmental.

I’m really curious to see where The Rehearsal goes from here. It’s entirely possible that the remaining episodes of Season 1 will all center around Angela, Nathan, and “their child” (along with Nathan’s cats) but it’s also possible that there will be another big twist coming soon. Maybe the premise of the show will slowly contort beyond recognition. We can only hope.