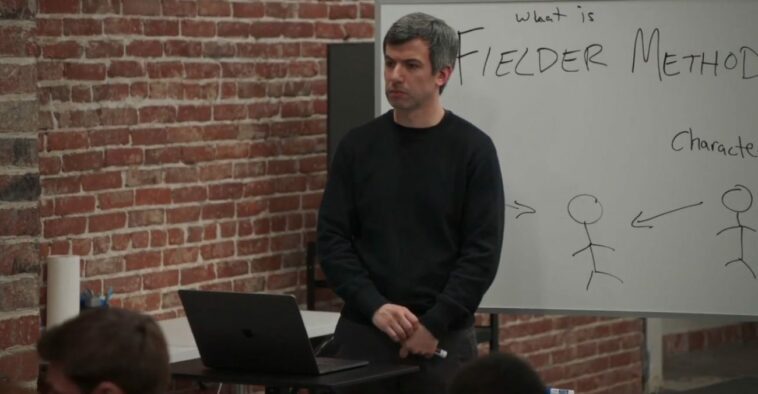 Since entering Angela’s rehearsal in Episode 2, Nathan has been helping her raise Adam, and I thought at the time that this premise would take over the rest of the season. Episode 3 made clear, however, that he is still doing rehearsals for other clients as well, and working to hone his craft.

Realizing that feelings had been missing from previous rehearsals, he got Patrick to emotionally invest in a relationship with Isaac’s fake grandfather so that when he learned this man had died, those emotional stakes would imbue his interactions with Isaac, as the latter pretended to be his brother.

In S1E4, we see Nathan taking things even further, and there is a brilliant point in the narration of the episode where you think he is about to wonder if he’s taken them too far, but instead he wonders if he hasn’t gone far enough.

The title of the episode, “The Fielder Method,” refers to an acting class that Nathan returns to LA to teach, because that’s where the actors are. He encourages those in the class to stalk ordinary people so they can learn how to be them. This culminates in having them work the actual job of their “primary” and then demonstrating their skills to the rest of the class.

It’s easy to kind of forget about the stalking part of the assignment, as we don’t really get scenes of this on camera, though we do get members of the class describing what they had done, and this includes a woman talking about getting into the person’s home.

Come to think of it, though, that may have been in a reenactment of a class session (though I still think it implies the event occurred). You see, feeling insecure about how the first session went, Nathan recreates it with a Fake Nathan in his stead so that he can take the perspective of a student named Thomas.

The first time he feels good about how he (now Fake Nathan) did at teaching the class, but as things proceed in further sessions (that he’s actually teaching) he feels he must have missed something in Thomas’s experience, so he does it again. This leads him to ultimately try to become Thomas in order to understand him, to the point of living in his apartment after tricking him into temporarily moving for the sake of the method.

Thomas seems to want him to check his mail and water his plants, but the scene where Nathan convinces him to hand over his keys is something we only see a reenactment of (with Nathan playing Thomas and talking to Fake Nathan), and it really gives the impression that Nathan coerced Thomas into this. Also the man would seem to have no idea that Nathan is going to proceed to eat his food, sleep in his bed, and so on. But this is what happens.

The scene where Nathan as Thomas expresses confusion about the release he is asked to sign is worth noting in this regard, as it shows a self-awareness that those filmed for The Rehearsal don’t necessarily know what they are getting into and probably didn’t really read the form. The show calls itself into question.

After all of this—which goes through the point where Nathan is pretending to be Thomas, who is working the job of his primary, by working a job at another branch of the same smoothie establishment—Nathan returns “home” to Angela and Adam. But due to the condensed timeline, Adam is now 15. Nathan has been gone for nine fictional years, so the warm welcome he receives feels off.

He gets Joshua, who is playing teenage Adam, to redo the moment when Nathan arrives home, pulling on the feelings of resentment he imagines he would feel if his father had actually been gone for nine years, and this carries forward as Joshua studies a friend with an absentee father to better embody the role. All of this is at Nathan’s urging, but Joshua does such a good job the circumstances become unbearable.

Nathan asks Angela if they can dial back to six-year-old Adam, and she says OK. This is prior to Adam’s apparent overdose, which does make the stakes of that moment feel more real. I legitimately wondered if something bad had actually happened when I saw Nathan busting down Adam’s door, but of course it was an act.

Adam is loaded onto a stretcher from an ambulance that arrives, and one of the EMTs in this scene is played by Thomas from the acting class. He’s thus in the closing credits for “The Fielder Method,” which I am sure he appreciates, though we have no idea how he does or will feel about the rest of the episode.

Adam ultimately jumps off of the stretcher before he can be loaded into the ambulance and runs off, leading to a scene of Nathan searching for him. He finds him at a playground with some other teenagers, before he goes down the slide to reunite with his “father.”

But when he emerges from the slide he’s six again. Nathan and Adam smile and walk off together.

Coming back out at the top of the slide, Joshua looks around and asks, “Is that it?” Roll credits.

I hardly know what to say about all of this, honestly. It’s hilarious and almost impossible to parse in terms of what’s real and what isn’t. But as I have argued with regard to the preceding episodes of The Rehearsal, I take that to be the point. The show continues to circle back around on itself, adding layers and iterations of feigned reality, but in a way that rides these waves rather than ever taking any ironic detachment from them.

The fact that Fielder continues to find a way to go further in pushing the idea of rehearsing for reality right towards reality itself, only to encounter an unbridgeable gap between the two, where they nonetheless almost touch, puts another spin on the title of S1E4, as I am led to ponder the method at play in creating The Rehearsal itself.

The anxious desire to control one’s circumstances runs wild here, and it gives birth to a work that feels sublime, as reason flails in trying to comprehend it. The rationale is clear enough, but the effect is in how it spirals out and pulls the ground of reality out from beneath our feet.

There are two episodes to go in the season, and I am on the edge of my seat waiting to see how Fielder will continue to take the premise of The Rehearsal up a notch. We’re already well past 11.