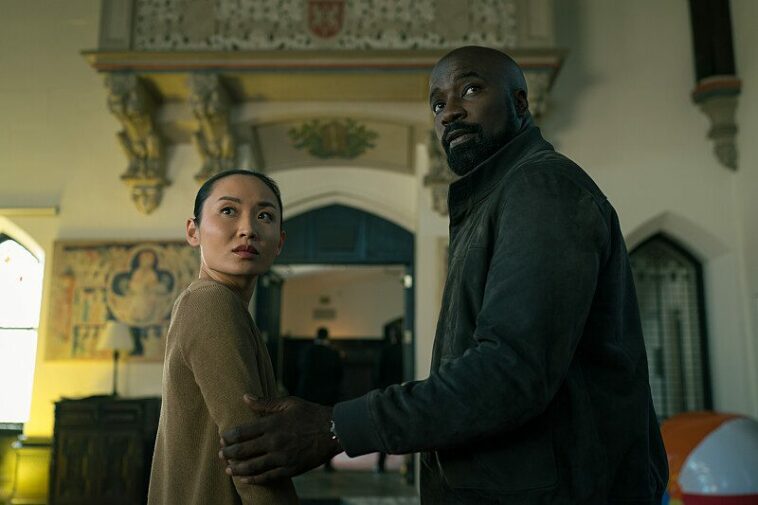 The following contains spoilers for Evil S3E9 “The Demon of Money” (directed by Yap Fong Yee and written by Nialla LeBouef).

Evil S3E9, “The Demon of Money,” is the penultimate episode of a consistently great season, and we are really starting to ramp up some plot points in preparation. Like the best of them, “The Demon of Money” has plenty of spooky,  plenty of fun, but this weeks brings an additional sinister edge that I was not exactly expecting.

This week’s case involves the team checking up on a man named Henry who hasn’t been attending church. In a state of extreme paranoia, he’s holed up in a yacht—David even needs a little red wristband applied by a security guard to enter the yacht. Henry recently hit it big on the stock market after receiving a tip, and ever since, he’s been stalked by a shadowy figure. This figure is instantly creepy—it looks like a man wearing a black hoodie, but on the security footage it moves like it’s skipping frames, and shorts out lights when it walks past them.

Meanwhile, Grace is getting grilled by the Vatican to help complete a number of pages of texts and images with slices missing. Overwhelmed, she requests that David visit, and, noting the security wristband David is wearing, connects it to one of the most important Sigil Houses. Henry recognizes the sigil from a pen gifted to him by a woman named Tamara who gave him the stock tip that brought him his wealth. When they visit Tamara in a very small apartment, she reveals that she was stalked by a shadowy figure once she hit it big on the stock market. She could only rid herself of the figure after she got rid of her possessions, including the mansion she bought with cash. She directs them to her uncle, who also encountered the figure.

The uncle in question is a wheelchair-bound man with a heavily bandaged nose and eye, who tells them about a stock called DF. A man in a bar gave him a tip to buy it, and shortly thereafter, got rich from it. He describes an encounter with the figure, after which he realized that to get rid of it, he had to give away everything he specifically bought using that DF money…including the LASIK on his eye, and his nose job. He removes the gauze over his nose to reveal that it has been cut off, in a terrific moment of body horror. He also remarks regretfully on the breast implants for his wife that he paid for thanks to DF, and we just get to let our imaginations run wild on that one. Finally, the uncle recognizes the sigil as the official logo of DF.

Surprisingly, the figure actually does end up actually killing Henry, but it doesn’t get a concrete resolution beyond that. It’s a little disappointing to not have answers to the figure’s weird, jerky movement, but the trade-off is divine. After the trio deduce that the demon gets passed on not form selling possessions, but via a recommendation to purchase DF, Kristen demands that Ben give her the stock tip. She goes to the grocery store guy (who has been active on VidTap being verbally aggressive towards women) at his house to pass it on to him by offering a truce and a stock tip. In one fell swoop, she’s eliminated the demon from their circle and transferred it to this massive pile of crap. Is it a weird clout-chasing maniac, an actual demon, or something else? Doesn’t matter, it’s that douchebag’s problem now. If and how the House of that sigil utilizes him remains to be seen.

I can’t think of too many investigations on the show where the lines get connected so cleanly, but it serves the episode well because there is a lot of other plot to get to. Because it’s Kurt Alert time, everybody! At the beginning of the episode, Kristen visits Kurt to discuss the trauma of witnessing Valerie’s death last week. Kurt, with his formerly demon hand bandaged, surprisingly offers some solid advice to Kristen. Of course, almost as soon as Kristen leaves the office, Kurt is singing Allouette and banging out his book on the laptop. When confronted by Kristen, he hands her the completed first half of the book, insisting she read it. Later, upon doing so, Kristen finds that it is mostly gibberish with nonsensical strings of symbols and words. Following that is a story, but written backwards—like you’d need a mirror to read it. For some reason, Kristen doesn’t think to do this, but her daughters do; and when Kurt finds out how much they loved it, Kurt happily praises Satan and continues writing. Man, this dude is a trip. I don’t think Kurt has any intention of hurting anyone—yet—but his increasingly desperate attempts to wrangle his muse are definitely concerning.

There are multiple moments of levity that cut through the sense of impending doom. We saw in the first season that Grace can more easily receive prophecies when she is playing with an inflatable toy. Seeing multiple priests standing solemnly around a collection of ancient texts, holding inflatable giraffes and ducks with sunglasses is just perfect. Speaking of sunglasses, Grace’s other boost is children. When she joins the Bouchard kids for a pizza party at a playplace, four priests are sent to keep eyes on her. Said priests are seen hunched around a comically small children’s table, wearing sunglasses. It is absolutely hilarious.

It seems that the cat is about to be out of the bag. When Grace finally meets Sheryl, she is immediately struck by a sense of horror coming from Sheryl. Shortly after, she is hit with another prophecy. She sketches out the room in which Andy is held in Leland’s apartment. She doesn’t know what it means, but she tells Kristen that Andy needs her help. Two horrifying things about this: earlier in the episode, when asked when Andy is coming back, Grace replies, “Thursday.” The next day, when faced with her prophecy, Grace tells Sheryl, “I won’t blame you…for tomorrow.” Is Andy going to die?

The climax of “The Demon of Money” is an outstanding slasher-inspired scene: An absolutely deranged Leland closes in on Grace, counting up (his favorite part of hide-and-seek) as he ascends the stairs to her quarters, scraping his dagger across the cobblestone wall and producing sparks as he chuckles menacingly. The score does some really heavy lifting as Leland barges into Grace’s quarters, and, seconds away from killing the prophetess, is interrupted by the Monsignor. The sequence of them grappling over the knife is devoid of any audio apart from said score in a blistering ’70s-flavored sequence ending with both men tumbling down the stairs. A maimed Leland escapes, but the Monsignor is fatally wounded. Just as I was really starting to like the Monsignor, this was a shocking and sad death, especially since his last words were to tell Ignacius (from “The Demon of Death”) that he loves him.

Wow. We’ve got one episode left in the season, folks, and things are heating up. The back half of S3—hell, the whole season—has been absolutely wild. I expect next week’s finale is going to be extremely eventful and probably end on a banger of a cliffhanger. See you then!