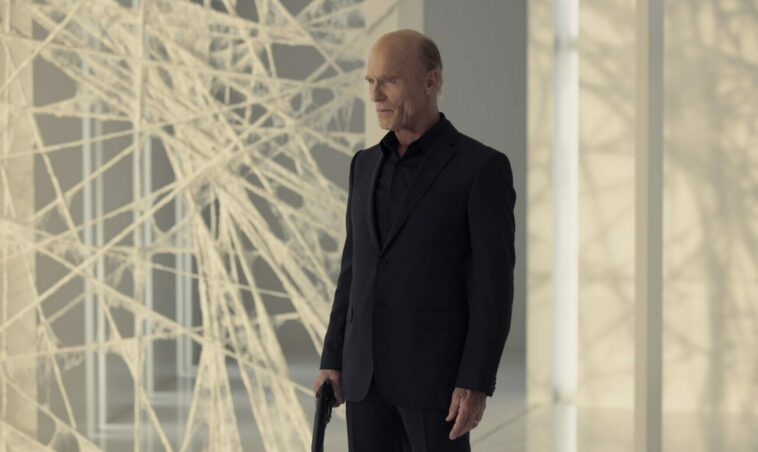 After last week’s relatively slow, but thematically rich episode, Westworld S4E7 “Metanoia” moves at such a fast narrative pace that I was kind of bummed about it. I wish I could’ve spent more time with the characters before the action picked up again, and I did miss the philosophical nature of Episode 6. However, I have to admit that I was so impressed by the showrunners’ choices in this week’s episode that I still found myself swept away by what happened with the show’s main characters.

Knowing we were approaching the Season 4 finale, I was prepared for some deaths, but I never expected the real William, Stubbs, Bernard, Maeve, and Charlotte to all meet their ends in this episode. That was quite something. And ending Episode 7 by showing us that it’s the host version of William who ultimately destroys the world brings us full circle in a way I didn’t see coming.

When Westworld began, the Man in Black, later to be revealed as William, was the primary antagonist, at least towards the hosts, who I always saw as the primary protagonists in relation to the humans that inhabited that first season. As the series continued, William seemed lost, both in terms of character and in terms of storytelling. I mean, what the heck does he even do in Season 3?

This season, he’s been in a prison of some sort. His story is essentially over. As for the host version of William, he’s sort of just been Charlotte’s henchman. As Season 4 has progressed, though, he’s begun to question his place in the world. In “Metanoia,” host William has one final conversation with his human counterpart, who seems to awaken the Man in Black inside him. William, the rotten individual that he is, tells his host copy that destroying not just humanity but hosts as well is necessary:

“When an atomic bomb detonates, and then the radiation knocks the electrons right out of your bones, what do you want? To know who you are? To know what it all means? You’ll be too busy vomiting up all of your organs. Culture doesn’t survive. Cockroaches do.”

Host-William deciding to essentially detonate an atomic bomb by increasing the signal that controls humans in order for them to slaughter one another and then killing the real William could be seen as cheap by some. It could be seen as too quick a turnaround for someone who was recently questioning whether keeping humans in control and killing outliers was necessary. I buy it, though. This host version of William is, after all, a copy of William. He’s got the Man in Black inside him. Why wouldn’t that eventually come out?

I mentioned back at my look at Episode 2 that it seemed that host William was only able to kill and do his dark deeds if he dressed the part. As the episode ended, I was not surprised to see host-William walk out of Charlotte’s tower dressed as the Man in Black, complete with the black hat. He’s the central villain again, and I’m definitely interested in what that means for the last main characters left standing.

After all, he’s just gotten the world to turn on one another, reminiscent of what Richmond Valentine had in mind in the film Kingsman: The Secret Service. To host William, whoever survives deserves to survive:

“One last game. Host. Human. Every man, woman, and child. Fighting until no one remains, but the cockroaches.”

I was not expecting Season 4’s penultimate episode to have host William at the forefront, but if it means he’s taken his position as the series’ main antagonist, now that Charlotte’s dead, I’m here for it.

As far as the other remaining main characters, first, there’s Caleb and his daughter, Frankie. With the help of Stubbs, Frankie frees the host version of her father from his prison, and they are able to escape. Hopefully, Caleb and Frankie’s reunion isn’t short-lived. The two of them deserve more time with one another, but with the pace that Westworld has been moving at this season, I’m unsure about that.

Still, Episode 7 manages to give them a warm reunion that brought some genuine emotion that, in my opinion, has been lacking this season. I love Aaron Paul as Caleb, and Aurora Perrineau has been great as Frankie. In an understated way, she shines, and I wouldn’t be surprised if this was her breakout role. Finally seeing the two of them share a scene together was pretty wonderful.

Then there’s Christina-Dolores and Teddy. Since we last saw them, he apparently revealed to her that she is a host, just like him. After testing her ability to not drown, she seems to accept that she is not human. However, it is a bit much for her to come to terms with the fact that not only is she a host but she’s a copy of an old host.

The thing is, Teddy calls her Dolores at one point, and although this doesn’t offend Christina-Dolores, she is curious as to what this means. Why was she created, and why was she kept in the dark? Also, what else is Teddy not telling her?

When everyone begins tearing each other apart during the episode’s climax, she demands to know why she can’t command anyone the way she’s been able to. She also wants to know why no one is attacking her or Teddy. He answers with this:

“Because you’re not in this world. It’s real. But you’re not.”

It’s a bit unclear what this exactly means, but it’s also a great way to end the episode.

That would be a great way to end this article, too, but I can’t leave this without talking about Bernard’s “plan,” which involved a lot of death and a lot of hope. This is common with modern storytelling. Dumbledore hoped his plan would work out, even after he died. The Oracle in the first Matrix trilogy had to hope that Neo would indeed make the right choice. Jacob on Lost had to hope that his candidates could ultimately defeat that show’s own Man in Black.

“Metanoia” opens with a flashback to Bernard’s time in the Sublime at the beginning of Episode 3 this season. We get a glimpse of just what looking at possibilities looks like, and it’s basically not all that different than the real world, except that the image is super wide with black bars on the top and bottom. Bernard figures out the best possible future, though.

We get to see what that future is near the episode’s end, and basically, the best future is one where just about everyone dies, except for something. And is that something Christina-Dolores? Who knows?

I’m still unsure just how Maeve was a weapon, although I suppose it could’ve just been Bernard lying to ensure a very specific outcome. Going back to my Episode 2 article, I’ll take the show’s word for it. Maeve was a weapon, I suppose, in that she fought Charlotte. She was also instrumental in getting Bernard to the tower safely to accomplish his goal, whatever it was.

It’s a shame it wasn’t more, though, but maybe that’s the showrunners having fun with the audience. We expect one thing, but they have something else in store for us. I dig it. I’m left to assume that the answers and payoffs in Episode 7 were real. Fair enough.

I am also going to assume that everyone we saw die is dead and will stay dead. If so, that’s a heck of a way to approach the season finale. Let me say that again: season finale. How is next week’s episode not going to be the series finale? Westworld S4E7 “Metanoia” was solid, if too fast-paced. That said, I’m ready for what comes next.