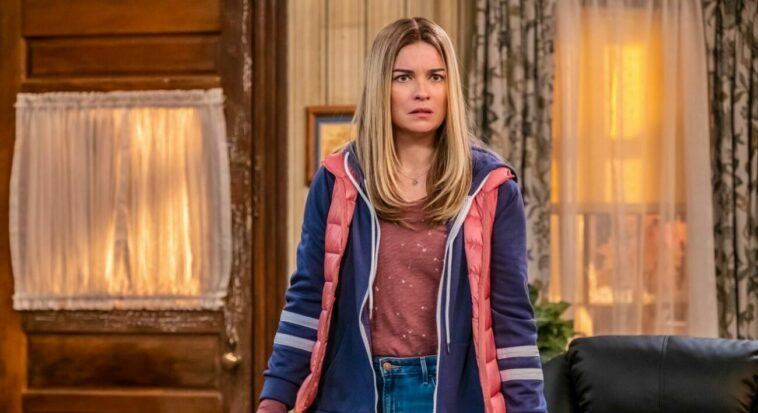 The following contains spoilers for Kevin Can F**k Himself S2E4, “Jesus, Allison” (written by Valerie Armstrong & Grace Edwards and directed by Anna Dokoza)

Kevin Can F**k Himself S2E4’s title (“Jesus, Allison”) could probably refer to what a lot of us exclaimed as the episode came to a close with her telling Sam about her plan to fake her own death. There is pretty much no way to argue that this is a good idea, no matter the point of view you take on it. Rather, we have to see it as an expression of Allison’s anxiety about going through with her plan.

Indeed, this anxiety runs through the totality of S2E4, even when it isn’t centered in Allison. Just look at Diane’s arc, from leaving Chuck to returning to him. It was just too hard to define a life for herself without him, and she does not in any way feel good about that, but that doesn’t keep it from being true.

It’s always been to Kevin Can F**k Himself’s credit that it recognizes that leaving a bad situation like Allison’s (or Diane’s) isn’t easy—the show has even built its premise around that fact—but it’s difficult to imagine Sam responding to Allison’s plan with anything like understanding or empathy. And that’s not because Sam is a bad guy, but because the plan really doesn’t make sense without the background knowledge of the risk that Allison is exposed to.

That this is at the top of her mind is clear from her visions of Nick in S2E4, but I do fear that the persistence of this threat somewhat undermines the themes that Kevin Can F**k Himself started with. Now, Allison doesn’t just want to get out of her life with Kevin, she wants to escape from the consequences of her attempt to kill Kevin, and it’s all too easy to think that she’s brought her situation on herself.

Of course, one could have thought that from the beginning, but that would have been to miss the point of the show, which hyperbolically pushed the discontent of a sitcom wife towards a murder scheme. Kevin serves as a symbol, and while I would never endorse murdering someone in real life, I was definitely on Allison’s side throughout Season 1, wanting her to succeed.

Do we want her to succeed with her plan to fake her own death? It feels more and more like Allison needs to instead comes to terms with and grapple with the reality she faces, rather than pursuing a fantasy. And that’s all well and good, but it’s not the most compelling story.

The bulk of S2E4 centers around the fact that it is Patty’s birthday. Neil usually takes her ice skating, but she figures he won’t this year, what with the whole bashing him over the head thing and all. Yet he does, but not because it’s a tradition and he loves his sister. He takes Patty ice skating because Kevin wants him to. It’s part of the plan for her surprise party (which of course Kevin is only invested in as a part of a plan to break up Pete and Lorraine due to the latter’s obnoxious laugh).

“The Way We Were” opened intriguing possibilities that Kevin Can F**k Himself could explore through Neil, but unfortunately we haven’t gotten much of that since. “Ghost” nodded in the direction of his ongoing difficulties, and “Jesus, Allison” perhaps does a little more through his outburst at the skating rink, but while it’s clear that Neil is not OK, that feels largely like something in the background and a missed opportunity. I hope that might change in the back half of the season.

Allison teams up with Tammy to plan the surprise party for Patty, and there is some humor in their interactions, as the two have starkly contrasting dispositions towards the world. But of course this leads Tammy to rifle through Patty’s client book and invite those she used to deal pills to, so that’s not great.

Still, Tammy doesn’t get wise until she finally gets that video footage from Vermont she’s been waiting on, and it’s pretty clear she recognizes Patty on it.

So all indications are that Allison and Patty’s plan is going to blow up next week, and a different plot arc will carry us through to the series finale. My biggest hope is honestly just that Robin Lord Taylor is involved.