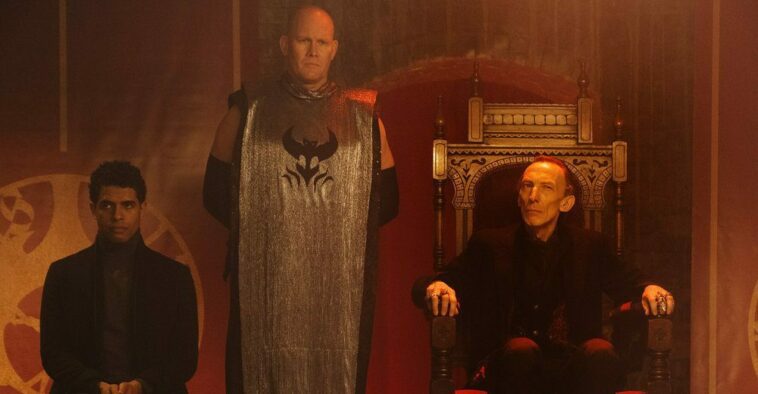 The following contains spoilers for Reginald the Vampire S1E10, “Reginald Andres Beyond the Thunderdome” (written by Harley Peyton, based on the books by Johnny B. Truant and directed by Jeremiah S. Chechik)

It’s bizarre that after such a wild ride watching this series, I’ve gotten to the place where I almost ignore the terrible writing, middle-school acting and odd plot choices and start to enjoy where the show is taking me.

The Reginald the Vampire season finale is where the infamous “assessment” takes place, and Reginald (Jacob Batalon) has to pass all of these vampiric tests, or he and Maurice (Mandela Van Peebles) will be killed. It’s bonkers to me that they got Julian Richings to play Logan, and even his performance seemed out of place, which makes no sense because every time Richings is in an odd and slightly juvenile fantasy, he’s always nailed the tone.

Nevertheless, at this point, Reginald the Vampire must be in on the joke and making fun of itself because some of these “tests” in the assessment were out of pocket. Most of what they showed felt like what gym teachers put us through in high school, and then what was outlandish was also ultimately very humane, like carrying a beehive and using a claw machine game.

As much as I was kindly waiting for this part of the episode to end so we could get to the real drama, I watched with a small smile at the ridiculousness of these tasks and the writing surrounding them.

When Reginald finally fails, and the walls start closing in on our main cast, the episode picks up but also feels empty? There certainly were stakes. Reginald and Maurice were about to die, and Todd was too, and Logan (Julian Richings) had sent assassins after Sarah (Em Haine), Ashley (Marguerite Hanna), and Claire (Thailey Roberge). Yet, nothing felt urgent, and there were odd pauses during the scene that weren’t filled with suspense, just silence.

Then, Reginald’s plan fell into place. Of course, it did; how could it not? He’s the show’s namesake. I was surprised, however, by how gory the show became during this part and how many times the characters swore, which was entertaining but also felt out of place. And what a common theme for Reginald the Vampire to have so much going on all at once, and instead of feeling intrigued, you’re confused and devastated by the contradicting tones and premises.

The sets and the colour scheme tell one story, and the dialogue and acting tell another. Nothing ever felt like it was entirely on the same page. This show could be loved and adored for these quirks, but I’m not sure that Jacob Batalon has the driving force of a main character to constantly lead this series to draw people back to this project. His dialogue pacing and sudden spurts of gumption come across as flat and shallow. I enjoyed watching the plan come to fruition, but it also felt a little too easy. None of our main cast lost anything. There was no sacrifice. Which is fine… for a sitcom, but again, this is an hour-slot show, there needed to be more to lose.

If you sit back and watch passively, Reginald the Vampire is a fine show, but it can’t stand up to inquisitive eyes, which is a significant misstep, especially for a fantasy show. We nerds and dorks who love this genre are all about answering every question and analysing every move. Reginald the Vampire leaves these viewers with a lot to be desired.

Angela (Savannah Basley) had so much potential at this series’s beginning, and they squashed her, which was an abysmal choice. Her character deserves their own backstory bottle. Angela could have been Spike from Buffy the Vampire Slayer, and I think because of her relationship with Maurice, that may have been where they were going with her, but they screwed up her power chain. By the end, she felt less like a real villain and challenge and more like an inconvenient middleman. Now that Maurice is a Deacon of North America because he killed Logan, Angela’s reinstated power is at Maurice’s behest, making her power conditional and easily extinguished. Once again, she’s not being used to her full potential; Angela should have been given her own leverage and power hold.

I do appreciate how gay they made this show. Maurice is clearly pansexual or bi, the same as Angela. Ashley (Marguerite Hanna) and Nikki (Christin Park) are adorable and totally underutilised. Todd (Aren Buchholz) kisses Mike (Ryan Jinn) in the finale, which unfortunately plays into the “closeted gay bully” trope that people are loving these days. I guess what’s really unfortunate is that with all these queer side characters, the main couple is a hetero one.

If Reginald the Vampire were to get another season, I would still watch. Season 2 could be good if they make significant changes and get their heads together. Like I said when this show first aired, the concept has so much potential, and with the little snippets of the outside world they’ve shown us, this series could expand in very unique and exciting ways. However, I think it’s unlikely this series will get renewed. It just adds to the pile of queer vampire shows cancelled after one season and to the even bigger pile of fat representations abandoned due to lack of interest from general audiences.