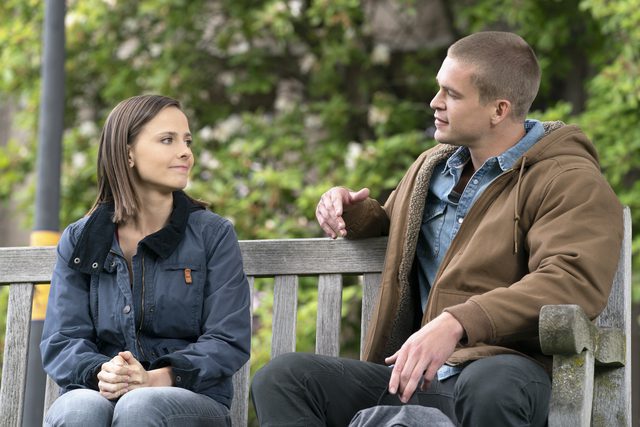 I’ve really been enjoying these double-episode releases because they give me a healthy bit of these four rambunctious women I wish I were friends with. However, it also means that we run through the release of the season much faster. Next week will be Episodes 9 and 10. After that, we’ll be starved until a third season is released!

The Sex Lives of College Girls S2E7 & S2E8 work well together but are less like the hand-in-hand plot structures they’ve used before. These two episodes felt more distinct from each other. Regardless, I enjoyed “The Essex College Food Workers Strike” and “Pre-Frosh Weekend” like a full-bodied glass of red wine. It hit all the right spots.

Bela (Amrit Kaur) gets what she deserves! She gets dumped by Eric (Mekki Leeper) for cheating, and I stand by his two supportive gay dads protecting him from her. What Bela did was wrong, and I am still a little peeved that Bela’s character arc was stripped back a bit by pushing her to make that decision. I think Bela has matured the least out of all the girls. Yet, Amrit Kaur somehow still makes me feel for her and understand her motives with empathy. Especially in “Pre-Frosh Weekend,” we get a more extensive glimpse into Bela’s insecurity when her old friend visits. Bela definitely lacks confidence, which she tries to hide with rash, bold decisions; it’s brilliant but hard to watch.

As the title suggests, The Sex Lives of College Girls S2E7 is about student hospitality workers going on strike. I genuinely love Mindy Kaling and Justin Noble, and the writer Beth Appel for this storyline! Unions are essential; workers’ rights should be respected! This little addition to the Essex College world levels up the relatability of the show. I love that the economic situations of these students are represented.

At the start of the season, I was worried that Kimberly (Pauline Chalamet) losing her scholarship would mean that the entire season would be about her figuring out how to pay for it and inevitably having to tell her parents. However, they’ve handled her story very well, without working on it and still being able to hit class issues on campus without her constantly being poor and miserable. I also thought it was funny that Kimberly and Canaan (Christopher Meyer) were approached simultaneously about the strike by their union rep. At some point, Kimberly took over and was leading cheers, getting speakers, and organising the rallies. So on brand for her.

I also love her and Jackson at the minute, but I absolutely died when he said his gym playlist was a mashup of EDM and Country. That’s such a specific genre of gym-bro; I love it.

Whitney (Alyah Chanelle Scott) hooks up with Andrew (Charlie Hall), the Bio-Chem know-it-all that grinds my gears. I feared this day would come, and I was not prepared when it did. I really hope they don’t start dating or something. Casual, okay; romantic, not okay. Even after everything that went down, I still ship Whitney with Canaan. They were excellent together, even if she went a little weird at the end. I hope catching Andrew and Whitney having sex in the library made Canaan jealous; maybe that’s the push he needed.

Aside from men, Whitney’s storyline seems straightforward and simple. She wants to be good at something by herself; she doesn’t want her mother to be butting in and making calls for her to get an internship here or there. I respect that; I really like seeing this nerdier side of Whitney. I think plenty of college athletes study bio-chem and similar streams looking at the functions of the human body. My chiropractor used to play professional soccer; it’s a thing.

Leighton (Renee Rapp) and Tatum (Gracie Dzienny) might start getting on my nerves. I don’t think this doppelganger concept does anything great for Leighton’s character development. Like, sure, Tatum is okay with Leighton being less cool than her, whatever. My argument is that issue shouldn’t even be on the table. Why is Leighton still obsessed with these elitist things? I want those priorities to unravel for her. I want to see Leighton realise she wants a normie life because she clearly doesn’t want to end up like her mom: shallow and obsessed with status. It was nice that she came out to her dad, though; that was cute. And it was nice that Tatum was already out to her dad; that was cute too.

They’ve hit the jackpot with The Sex Lives of College Girls; they’re fleshed out and complex yet distinct and somehow simple. It’s wild, but they all have their little thing going on, like the Spice Girls or the women from Sex and the City.

That’s something to try with your friends. Who are you? A Kimberly: a Midwesterner with a strong head for social justice and spotty real-world experience? A Whitney: a star athlete, overshadowed by your overachiever parent and desperately in need of finding yourself? A Leighton: a closeted rich girl who has never known an actual support system, leans into social structures to find belonging? Or a Bela: a rebellious comedy wiz struggling to find a place for yourself in a world that won’t take you seriously?

There is certainly more than that to each of these characters, but knowing how each character might react to a situation differentially could iconise the show. It’s a big well done from me to creators Mindy Kaling and Justin Noble, who created a show about a college campus that doesn’t feel boxed into the Greek life or the Varsity team; it’s a much more universal concept.