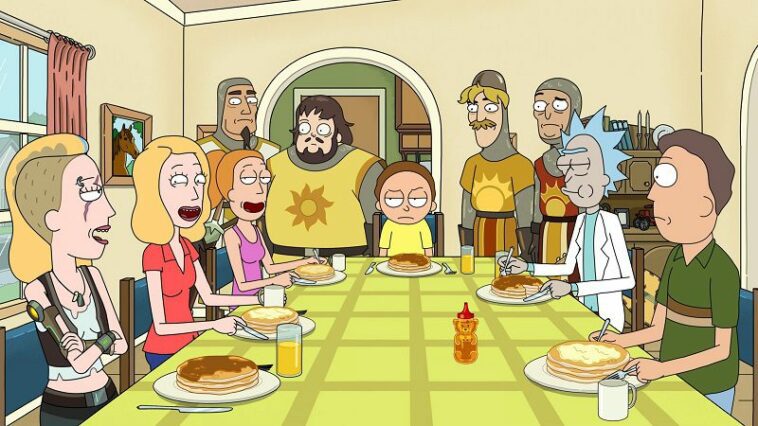 The following contains spoilers for Rick and Morty S6E9 “A Rick in King Mortur’s Mort.”

Rick and Morty S6E9 wastes no time on dishing out a withering put-down on a popular hipster trend: the pop-up restaurant. Rick and Morty are visiting an asteroid on which one of these pop-ups has appeared, but Rick is having none of this “standing in line” crap and wanders off to a different vendor. A pair of knights, insisting on complimenting each other, walk past Morty at the end of the line with armfuls of food, when one sandwich falls to the ground. When Morty attempts to let the knight know he dropped one, the knight tells Morty to keep it as a reward. Morty refuses, insisting that he wants to stand in the line and wait before eating. This prompts the knight, who is dressed suspiciously like Solaire from Dark Souls, to offer Morty his sword and succeed him as a Knight of the Sun.

After some deliberation, Morty decides to take the sword…and the knight offering it immediately impales himself on it, transporting Morty to the fortress of the Knights of the Sun, which is on the sun. There, he learns that the Knights are protectors of the sun, the center of the solar system. Or rather, they protect the Solar Scepter, which is, as they believe, what all planets actually revolve around. The Knights live with unbridled freedom.

Morty couldn’t be more excited to join the Knights, until he learns that part of the officiation process is to cut off his penis and throw it into the sun. As it would be for most of us, that’s a deal-breaker for Morty, even though the entire process is memorialized in stained glass above the castle. Rick shows up in the nick of time, and when asked why he isn’t burning up, Rick just points to “Science, and unless I’m misinterpreting, is clearly not a priority here.”

The King won’t let Morty leave unless Morty bests him in combat, so Rick gives Morty a sword that learns enemy attacks through AI (“The sword has already seen Blade, and loved it. You’ll be fine”). Sure enough, Morty handily defeats the King, who relinquishes his crown and impales himself on his sword, which makes Morty the king, even though he’s not yet a knight. As we’ve probably already figured out, this episode is actually skewering religious groups and their (probably) dubious rules.

Returning to Earth, Rick admits that he realizes that he’s often very mean to his grandson, and will strive to be 22% nicer to Morty, at least for now, which surprises Morty since he was expecting for Rick to absolutely lambast him for kicking off this new misadventure. The Knights aren’t far behind, insisting to stay at Morty’s side at all times. One of the Knights reiterates that they keep the Scepter on the sun so that the planets revolve around it and don’t bump into each other.

The Beths making fun of the Knights for not understanding sixth-grade science gives Morty the idea to educate the Knights that it is the sun’s gravitational mass, not the Scepter, that maintains the planetary rotation in the solar system. The Knights are skeptical, until Rick sneaks in and kicks a box over to Morty from which Morty produces the Scepter, utterly shattering the Knights’ belief system and causing them to disband.

What this also shatters is the complete political stability of the interplanetary alliance, resulting in all-out war as the representatives of each of the planets violently feud over ownership of the Scepter. Solar War I finds history tomes literally written in blood, Santa getting crucified, and each of the planets coming up with increasingly advanced and horrible ways to annihilate each other, all set to Pink Floyd’s “Goodbye Blue Sky.”

Morty, in an attempt to end the conflict, visits the Knights, but finds them apathetic and addicted to heroin. Morty admits that he wanted everything the Knights of the Sun once offered, but didn’t want to cut off his penis for it. A Knight counters that that’s the point—they were willing to follow him without forcing him to commit to their traditions, only for him to demolish their religion, but now he wants to just roll up and try to recruit them again.

Morty offers to cut off his member if it means the Knights can reunite, acknowledging the meaningless of tradition but his willingness to bring them all back together. Falling apart in the bathroom, Morty understands that cutting off his penis will save the solar system, but can’t stop crying. Rick consoles him by offering a fake penis with fail-safes. Rick pulls his crying grandson into a big hug. “Shhh, we’re gonna make your dick so fake, buddy.”

With the Knights back in action, the rest of the planets willingly throw down their arms. In the moment of truth, Morty’s fake penis does indeed work as intended. This is a very funny sequence, as the court continues to roll out contingency…penis detectors to bypass any sort of fakes. Rick somehow telepathically communicates with Morty, now that they’re backed into a corner with all of the dick detectors, to run. Rick tells Morty he’s proud of him for absolutely going for it in this adventure, and they tell each other how much they love each other before they jump together into the sun. 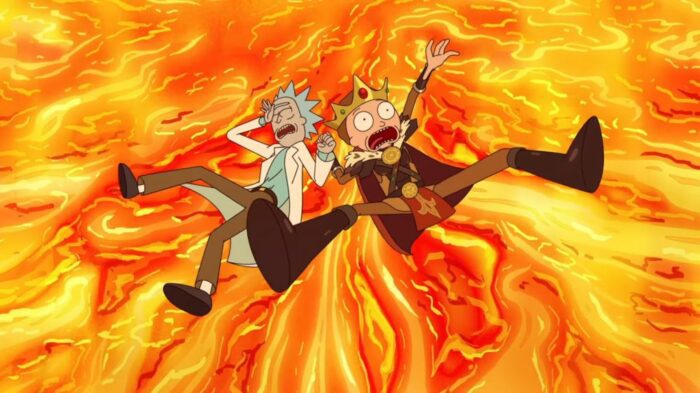 We cut to the Knights of the Sun reminiscing on King Morty and Rick jumping into the sun, and how they confirmed that it wasn’t a fake sun because of the bones floating to the surface—wait a minute, did we just get Vat of Acid’d again? I was terrified for a moment, waiting for the other shoe to drop, for Rick to get another Vat “I told you so,” but the moment never came. It seems that Rick has been completely and totally genuine this week in his support for Morty.

This is leading me to suspect that there may be something very eventful in the season finale that will bring Rick back to who he has been for most of the show. I could be wrong, but there are still a lot of episodes remaining on the Adult Swim order, and Rick’s had a pretty momentous season for growth as a character. But he’s also had several instances of falling back into his old attitudes and behaviors. Overall, I wasn’t as “hot” on this episode (har har) as I have been for most of the rest of the season. But it was still good fun, and I can’t wait to see what’s going to happen to the characters in the finale.