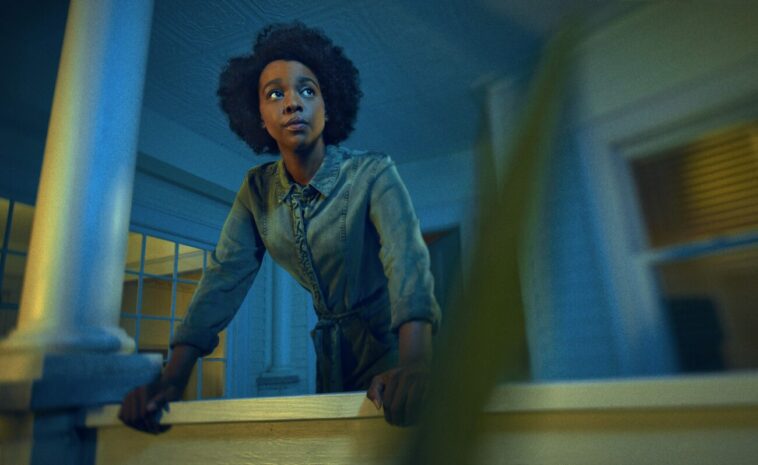 The following contains some spoilers for Season 1 of Kindred (created by Branden Jacobs-Jenkins and based on the book by Octavia E. Butler)

Showrunner Branden Jacobs-Jenkins brings a fresh and modern perspective to Octavia Butler’s acclaimed novel Kindred. Core elements of the story remain the same, as Dana James (Mallori Johnson), a 26-year-old who’s recently moved to California, gets pulled back in time to a plantation where her ancestors were enslaved. Although, instead of Dana being from 1976, Jacobs-Jenkins’ adaptation puts Dana in 2016—a time when technology plays a massive role in the surveillance and marginalisation of minority groups.

The shift in Dana’s home time period from the 20th century to the 21st century, I think, emphasises some of Octavia Butler’s original themes rather than detracting from the core meaning. Jacobs-Jenkins’ ideas have expanded the story to incorporate similarities between Dana’s ancestorial past and her family’s present. Including Dana’s nosy neighbours, Hermione (Brooke Bloom) and Carlo (Louis Cancelmi), enriches the context of white supremacy because although these two white neighbours do not hold whips, they have power, influence, and the audacity to spy on Dana, their new Black neighbour.

It’s interesting watching the story unfold in this context because, in Octavia Butler’s original book, Dana was married to a white man whose sister treated her poorly due to her race. In the current political landscape, interracial marriage, although still frowned upon by racists, is not the forefronted issue when it comes to race in the United States; more so, the problem is related to surveillance, incarceration, and unproportional violence towards Black people.

Dana’s husband is reimagined in the show as the waiter she’s just met, Kevin Franklin (Micah Stock), who happens to be around the second and third time Dana disappears, slipping into the past. Kevin is supportive and understanding yet still ignorant and sometimes dismissive of the pain Dana is put through being thrown back in time. His presence, deep voice, and large stature are also part of the neighbours’ interest in Dana’s house. He is suspected of being the cause of the injuries Dana sustained from the white men of the plantation she travels back in time to. Jacobs-Jenkins’ use of Kevin in this way provides a “real life” explanation for Dana’s erratic behaviour and injuries; however, it also spotlights Dana in his disappearance, when he has been mistakenly left behind in the past, shucking Dana of her victim hat with a suspect hat in the eyes of the nosy neighbours and Kevin’s sister.

Dana’s backstory and family create a fantastic dynamic for her, integrating generational trauma, female familial bonds, and a history of mental health issues that builds a foundation of mistrust. Dana’s aunt, Denise (Eisa Davis), loves and cares for Dana but is unsure and unwilling to trust all of Dana’s decisions fully. The doubt in this relationship, along with the surrounding chaos, also complicates Dana’s present world but sets up a very captivating storyline should Kindred get a second season.

The changes to the core narrative expand the narrative as well. Not just Dana has travelled back in time; it seems her mother’s disappearance as a child is linked to this mysterious gift, and she, Olivia James (Sheria Irving), has been stuck in the past all this time. I’m not sure if the timeline sci-fi-wise makes sense with the Narnia-style time shifts, but nevertheless, I liked the change. It gives Dana an ally in the past who can explain a little of what’s happening and help her put it together out loud. In Octavia’s book, if my memory serves me correctly, most of Dana’s sleuthing to uncover why she’s being sent back happens internally through Dana as a first-person narrator. As far as adaptations go, this was very cleverly done.

Kindred spends a great deal of time as a slave narrative. It follows a Black woman through her trials and tribulations working at a plantation in Maryland. Master Thomas Weylin (Ryan Kwanten) and his wife Margaret Weylin (Gayle Rankin) are awful, as one would expect. I am not going to commend a couple of white actors for their ability to convincingly be racist… that’s ridiculous, but they did successfully do their job.

At the centre of Dana’s mysterious gift is Rufus Weylin (David Alexander Kaplan), the young son of Master Thomas and Margaret. Every time Rufus thinks he’s going to die, Dana is pulled back in time to save him. Dana eventually concludes that he’s one of her ancestors, and if he dies, so might her family line. No matter how poorly Rufus behaves, Dana must save him. David Alexander Kaplan plays a fine racist brat with a soft spot for Dana. These two characters have a complicated relationship because although Rufus respects and admires Dana, he still sees her as other and lesser than himself and treats the other enslaved Black people on his father’s plantation rather poorly. It is a peculiar relationship, but as Rufus grows, at least as it happens in Octavia Butler’s novel, he becomes much like his father and takes what he wants when he wants it, even from Dana.

The difference between Kindred from other fictional slave narratives out there is the level of humanity given to the enslaved Black people on Thomas Weylin’s plantation. There is community amongst the people, and there is self-interest. Luke (Austin Smith), having grown up with Thomas Weylin, has certain privileges and maintains a leadership role. However, he mistakes this closeness with Thomas as decency rather than convenience and, until near the end of the season, is ignorant of some of Thomas’s crimes. Luke’s privileges allow him to act out of self-interest and autonomy, ultimately getting him punished in gruesome ways and sold. Luke’s story explains an internal hierarchy of enslaved communities which folds in the cook, Sarah (Sophina Brown), and her self-interest. Her position gives her a currency among the enslaved people on Weylin’s plantation; food and skill. Sarah’s talent keeps her position despite her disagreement with Margaret Weylin, and her place among the enslaved people gives her intel and influence. Sarah acts out of her own self-interest to keep her position by poisoning another woman’s food, delivering the news of Dana’s new ownership to her, etc.

Kindred explores the local survival and what people did to keep themselves planted on the hierarchy within the community of enslaved people on plantations. Running north is mentioned; it’s a possibility, but for most, it’s about how they can secure their position on the plantation with the Weylins’ and survive there.

I like the direction Branden Jacobs-Jenkins has taken in this adaptation; it expands rather than changes the narrative, which will keep readers of Octavia Butler’s Kindred on the edge of their seats but also satisfied. The performances served the narrative; I wouldn’t say that any particularly stood out. Although I found the deepness of Micah Stock’s voice at times off-putting, I got used to it, and perhaps that’s personal, and I don’t know enough people to encounter a man with a voice that deep, but my god, that man has a deep voice.  Of any of the performances, perhaps Sheria Irving stood out. She was intelligent, strong, and soft, determined to help her daughter and do right by the people she’s become kin to. Mallori Johnson’s performance improved with each episode, and her emotional climax sitting on the bed with Eisa Davis was well done.

Kindred ends with a cliffhanger that made me want to scream. Despite knowing the original narrative quite well, I am desperate to know what happens next; what Branden Jacobs-Jenkins has done with it is fresh and exciting to watch.