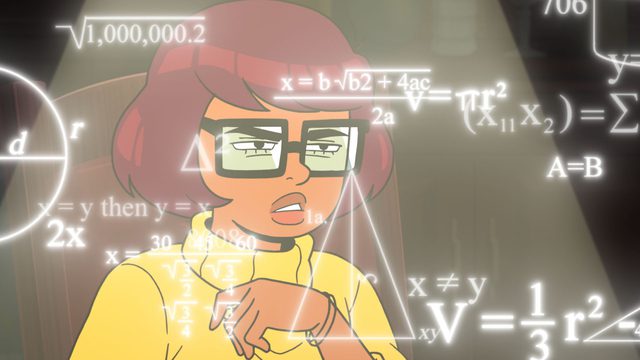 Bold, meta, weird, and stoopid. Velma has emerged from the deep, dark, and messed up imagination of Charlie Grandy and is bending the rules of the Scooby Doo franchise with this adult-themed animated comedy. It takes on the speculated queerness of characters and shoves them into the forefront of the conversation. It emulates nostalgia and new-wave thinking in its conception. Not every joke lands, but the outlandish and self-deprecating humour cuts through the plot holes or contrived conflict, making for a fun, unexpected journey into this new universe.

Set in the present, notable by the use of smartphones and pop culture references, this Scooby Doo retelling focuses on the origin story of its namesake character, Velma (Mindy Kaling): an Indian kid from a broken family battling guilt and mental illness caused by her mother’s disappearance. Although, it’s not just Velma’s hallucinations that make this show spooky. The town where this story is set is drawn dingy with lots of shadows and deep-toned colours, emulating the spoopy world of the original series.

The show plays with and subverts stereotypes the original Scooby-Doo used for its ensemble; although not all are original—the squeaky-clean Norville, aka Shaggy (Sam Richardson), ISN’T a stoner! Yet? But, yes, this rendition of the Mystery Gang features a sober Shaggy, a crime lord Daphne (Constance Wu), a meek Fred (Glenn Howerton), and a deathly curious Velma. Not everything screams out of the box, but the avenue creator, Charlie Grandy, has taken within the map of cultural reference, feels fun and fresh in familiar ways.

I would not claim that Velma breaks barriers or expectations and blows audiences away with nuance or ingenuity. But I do find the show enjoyable. It’s a lighthearted, laughable, darkish comedy, perfect for casual viewing. Which, let’s be honest, is what Mindy Kaling is best at—comfort comedy.

What’s most notable about the new Velma series is the clear and definite queer romance between best friends Velma and Daphne. Childhood friends to enemies to lovers, an age-old tale and best when served sapphic!

Velmie or Daphma, take your pick, is a decades old pined for ship for lovers of James Gunn‘s 2002 Scooby-Doo starring Linda Cardellini as Velma and Sarah Michelle Gellar as Daphne. The fem-chemistry between these two characters is undeniable, and the queer-coding of Velma has been very clear from the beginning, even in the original cartoons—the same could be said with Fred, but that’s to be determined in HBO’s Velma.

The kiss between Velma and Daphne at the end of Episode 2, “The Candy Man”, is giggle-worthy! It’s precisely what we want when we want it. The payoff of this relationship is exciting to look forward to in the coming episodes. The fallout of the kiss is also exciting, given that Norville is the Ducky of Pretty in Pink in this scenario, except in this sense, you really shouldn’t be rooting for him to win the heart of a clear-as-day queer woman.

Monster and mystery-wise, we’re wading through new territory. Unmasking monsters to be criminals isn’t the key to this story, the monsters are all in Velma’s head, and so far, the mystery is serial killer material, not spooky factory sabotage. In a theoretical sense, or at face value, this is a much dark situation than the original Mystery Gang ever wandered into. Yet, in the style and tone of Velma, you barely bat an eye at the eeriness of it all.

Velma’s humour plays to the sensibilities of a younger media-literate audience intrigued by the diversification of beloved childhood characters. The comedy is blatant, to-the-point satire that directly calls out the obvious or draws in television meta-dialogue, becoming self-aware. I’d say it’s pretty clear the intended audience for Velma is Millenial and Gen Z animation lovers who may, by chance, enjoy a little green leaf or spend exuberant amounts of time on fandom sites, or social media, debating which elements of their favourite fan fiction are legitimate canon or head-canon.

Velma is steeped in internet culture and generational awareness. It is a comedy very much ingrained in the current comedy culture era. It ventures into the valley of cliches and tropes, emerging cognisant and defiant, both playing into and diverting from what is expected at every turn.