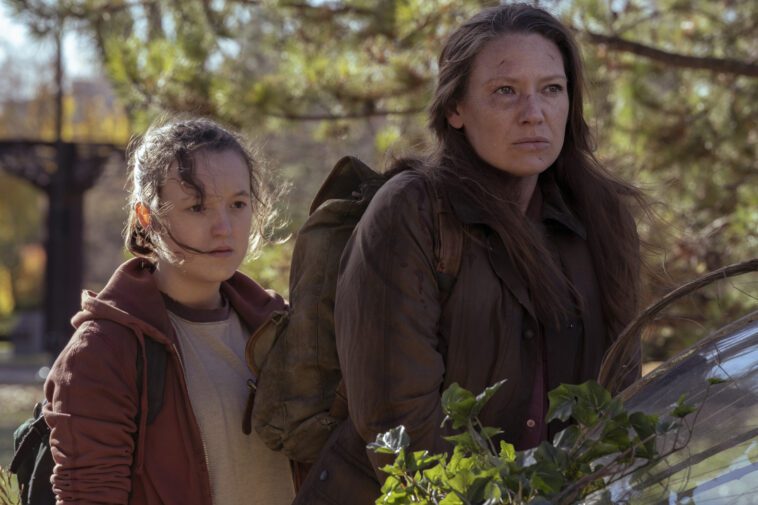 The following contains spoilers for The Last of Us S1E2, “Infected” (written by Neil Druckmann & Craig Mazin and directed by Craig Mazin)

Through the first two episodes of HBO’s The Last of Us, the three flashback scenes that precede the 20-years-later timeline have been some of the show’s most compelling and dramatic revelations. These world-building snapshots of a life of paranoia before the infection spread juxtapose the dread and helplessness of those before the cordyceps apocalypse with our main characters who are living in the aftermath.

At the beginning of Episode 2, “Infected,” we are introduced to Dr. Ibu Ratna, Professor of Mycology at the University of Indonesia. She has been asked by the Indonesian military to inspect a deceased young woman who was bitten by a co-worker and now, improbably, has the cordyceps fungus growing inside of her. Dr. Ritna’s training and research all tell her this is not possible (calling back to John Hannah’s exposition from a flashback in Episode 1), but the evidence in front of her—plus 14 missing people from the fungus’ point of origin—all speak to the contrary.

When the Indonesian officials tell her that all this began at a flour and grain factory in west Jakarta, Dr. Ratna notes that for fungi, that environment is “a perfect substrate.” Or in non-academic language, a host from which a living thing grows, gets its nourishment, and is allowed to thrive.

The fungus needed its ideal substrate to be allowed to persevere and grow, but as we learn from the paths taken by Joel and Ellie in Episode 2, the world-destroying cordyceps is not the only thing desperate for a partner to help it find the necessary nourishment.

20 years later, as Joel and Ellie begin their journey together that will take them at least until the end of this first season, the first few sparks of connection begin to burn. Even though he does not for one second believe Ellie’s inability to be infected will lead to some cure, Joel does see Ellie as he sees the rest of the world: as a self-preserving, transactional place.

Tess convinces him that if the Fireflies believed Ellie to be as special as the Boston leader said she was, they would pay a heavy price for her upon delivery. But smuggling a human will be a hell of a lot different than smuggling a car battery, or drugs, or bullets. It will require compassion, protection, and empathy. And Joel is fresh out of all that after 20 years.

He wants no part in answering Ellie’s personal questions about how he got to Boston or how long he has been there. But Ellie is much more forthcoming with her story. No parents (it’s implied her parents have perished due to the infection), no siblings, no real friends. Nothing and no one to help sustain her. No perfect substrate.

Her lack of connection and personal nourishment, we learn, led her to venture outside a Quarantine Zone alone, where she suffered a bite from the infected and was subsequently rescued by Fireflies. She is not used to guidance, direction, or supervision. In Joel and Tess, could she possibly find stability and long-term experience that even the most independent 14-year-old can not get on their own?

But while it might be a more desperate search for a substrate for Ellie, it is quite surely going to be a reluctant journey for Joel. When Joel lost his daughter, Sarah, 20 years ago (in the opening sequence of Episode 1), he lost his closest family, his only child, and his purpose. In the little we learned in the first episode, all that Joel did was for the sake of his daughter. When his work and sense of provision for Sarah were no longer necessary, that motivation evolved into simple protection, at least until he lost her. The only things he wanted to give Sarah, he would never again be able to provide.

With Sarah gone, and his brother halfway across a post-apocalyptic country, Joel literally has no purpose but survival. He is the one who volunteers to shovel the dead children’s corpses into the burn pit because it is emotionless and transactional to him.

But Ellie represents a new kind of work, and might also represent a new kind of opportunity. Joel does not realize it yet, but he needs Ellie as a substrate to ground him back into humanity. After years of mourning his daughter, the world around him literally crumbling, and being separated from his brother, Joel’s only relationships are ones that come with intrinsic quid pro quo attachments.

Ellie is merely that type of relationship to Joel as “Infected” begins and runs its course, but when the smuggling operation takes a tragic turn, the Joel-Ellie relationship will be forced to decide whether or not to graduate. When we find out that Tess, Joel’s smuggling partner for years, was bitten in a battle with the infected at the Boston museum on their way out of town, the difference in his reaction to that news and the death of his daughter is striking.

The past 20 years after losing Sarah have beaten down Joel to a disconsolate state to where his reaction to Tess’s infection and certain death is cold and calculating. Does it serve him better to stay and fight the incoming swarm of infected with Tess, or make a run for it with Ellie and try to use her to gain what he wants outside Boston? When he grabs Ellie and begins to make a run for it without as much of an embrace or a “goodbye” with Tess, we see just how much of his humanity and empathy are lost.

The biggest question that remains for Joel and Ellie in the seven episodes we have left is: what can they become for each other? Can Joel confront the feelings of loss and failure from losing his young daughter to save another young girl? Will he allow himself to develop connection again and develop the ability to face the cruelest of worlds with a companion, instead of just a flashlight and a rifle?

For Ellie, can Joel become the substrate she needs that not only protects her physical life but also protects her humanity and allows her to grow? In her short 14 years, she has lost her parents, grown up in a disparate world, and recently been imprisoned as a commodity because of the DNA running through her. Her precocious attitude and demeanor on the show are spot-on performances by Bella Ramsey compared to the video game. But the tough façade masks a young girl who is alone and helpless.

Like many of The Last of Us’ zombie predecessors, the show has undeniably creepy monsters hunting our characters. For my money, the full-formed versions of the infected we saw in this episode are the scariest version of the undead we have seen on screen. But this show takes the humans-against-humans undertones of all those previous versions and turns them on its head. We are always going to be scared of monsters, but what happens when we stop being scared of each other? Can we then take the first few steps toward saving the world?