When I see a new science fiction show pop up in my Netflix suggestions, it’s a pretty good bet that I’m going to be checking it out. Some have delivered, like the German time-travel-focused thriller Dark (which many Twin Peaks fans will likely dig). Others didn’t grab me as much, such as Sense 8 and The OA. But one of Netflix’s newest original sci-fi television shows, Altered Carbon, definitely does not disappoint. Altered Carbon, which stars Joel Kinnaman as super soldier Takeshi Kovacs tasked with solving an intricate murder, is a great mix of action, mystery, and dazzling visuals.

[Disclaimer: Altered Carbon is based on a 2002 novel. I haven’t read it, so I’m writing this without knowledge of what happens in the book.]

In the world of Altered Carbon, which takes place many years in the future, people have a small disc inserted in the back of the neck containing the person’s memories and personality. These discs, called stacks, can be transferred to other bodies (sleeves) when a person dies. The only way to permanently die is to be shot through the stack.

The show begins with Kovacs being re-sleeved 250 years after being shot and killed. He is brought back to life — in the sleeve of a former cop named Ryker — by ultra-rich guy Laurens Bancroft in order to solve a murder. The catch? The murder to be solved is in fact Bancroft’s, who unfortunately cannot remember who committed the deed. Kovacs’s prize for closing the case is a pardon (Kovacs had betrayed the world’s governing force known as the Protectorate in his former life) and a whole slew of cash.

The murder mystery drives the plot of the show, although for me it never reached a point of intrigue rivaling, say, Who Killed Laura Palmer. The usual twists and turns of a who-done-it are present — “Oh it looks like this might be the killer, but it’s only Episode 5, so it’s likely not.” Luckily, Altered Carbon doesn’t need the murder mystery to carry the intrigue — there are a number of other aspects that make it a blast to watch.

The heart of Altered Carbon is the futuristic cyber-punk world that serves as the backdrop. The show’s setting is like one giant flashing neon sign and features alien technology, virtual torture chambers, artificial intelligence-run hotels, and unique weapons. 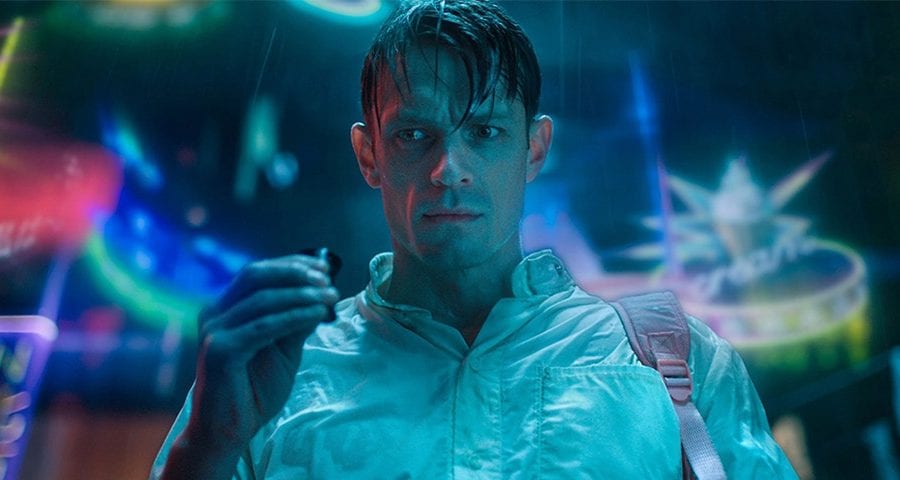 Characters having the ability to re-sleeve into a new body provides a number of great moments. In one, a large, bald, tattooed street-tough who is pursuing Kovacs is later loaded with the stack of a Hispanic grandmother. In the next episode, he is inhabited by the stack of a Russian gangster. It was something that could have come across as gimmicky but ended up very enjoyable and left me impressed with the actor’s (Matt Biedel) performance.

The ability to resurrect dead people also brings some interesting religious and philosophical aspects to the show. A segment of the population — known as Spirit Savers — believes if a person re-sleeves, their soul goes to hell. These people code their stacks so they are not allowed to be brought back if they die.

Multiple scenes in Altered Carbon ask the question: If immortality was possible, would that be a good thing? The show presents both pluses and minuses. Law enforcement characters defend its use to provide a voice for murder victims and to bring them justice. At one point, Kovacs has a conversation with the creator of the stack technology, and they believe it was a mistake because only the rich are able to afford immortality — and they were taking advantage of it. I enjoyed these moral dilemmas presented in the show.

For me, a television show needs to have multiple likable characters in order to keep me invested past a handful of episodes. A show can have a great cast and creative premise, but if I’m not connecting with any of the characters, I’m sorry; I’m out.

It’s the main reason I love Twin Peaks so much. Sure, I love the weirdness, mystery, and humor of Twin Peaks, but what kept prompting multiple rewatches of Seasons 1 and 2 over the years — and then ridiculous giddiness while watching Season 3 last year — was the many wonderful characters in Twin Peaks. Heck, the show’s most popular and interesting character, Dale Cooper, was essentially missing from the entire third season, aside from a small fraction of time near the end. Despite this, Twin Peaks soared in its return, largely in part to the vast amount of other interesting characters to care about.

Altered Carbon is not Twin Peaks, but it does have a very solid cast of supporting characters that kept me coming back for more.

Soon after returning from his 250-year-long slumber, Kovacs works to put together a team to help with his investigation. His pack of allies includes the cop who originally investigated the Bancroft murder, a former marine whose daughter was abused by Bancroft, and an AI hotel owner.

The Raven Hotel, where Kovacs decides to make his home base, is run by an AI named Poe. I loved Poe. He’s witty, he’s loyal, and even though he’s technically not human, he is possibly the most compassionate character on Altered Carbon.

Poe protects Kovacs with an impressive arsenal of weaponry and serves the occasional needed drink behind the bar, all while providing the show’s best comedic relief.

As Poe cannot leave the confines of the Raven Hotel, Kovacs needs to recruit some outside help. His right-hand man ends up being Vernon Elliot, an ex-military medic who Kovacs initially investigates as a possible suspect for the Bancroft murder. Once the whole murder-suspicion thing is put behind them (Kovacs quickly determines Elliot is not the killer), the two decide to team up.

Elliot’s entire family ends up getting in on the action. His daughter Lizzie is trapped in a virtual world, paralyzed by sexual trauma, for which Bancroft is ultimately responsible. Poe works to rehabilitate Lizzie to allow her to become herself again — and teach her to want revenge — before she can be re-sleeved.

Elliot’s wife Ava is an expert hacker but is stuck in prison. However, she is eventually re-sleeved into a man’s body in order to help with the investigation. I really enjoyed the interaction among the Elliot family, and I was probably rooting for them more than some of the other main characters in the show.

Another segment of endearing characters was the various members of the police that interact with Kovacs. The police view Kovacs as a terrorist at first, but eventually, the two sides find themselves working together.

Kristin Ortega is Kovacs’s main connection to the local police. The relationship initially is rocky, but we eventually learn that the man formerly living in Kovacs’s sleeve was Ortega’s partner … and lover. Kovacs and Ortega’s relationship revolves around the question of whether Ortega sees him as Kovacs or as her former partner — and this provides an interesting dynamic.

I am a sucker for flashbacks. When done right, flashbacks are an excellent way to develop characters and further the plot in a TV show.

Altered Carbon uses flashbacks to tell us more about Takeshi Kovacs, who he was more than 250 years ago and how this affects him in present day, inhabiting the sleeve of a former cop. The flashbacks are sprinkled throughout the season, slowly putting the pieces together about Kovacs’s past. They were paced well and left me wondering what would happen next.

The scenes go on to tell us that Kovacs grew up with a sister, who was clearly important to him. The two are separated at a young age after Kovacs kills their father. Years later, they reunite and join forces with a rebellious group of soldiers known as Envoys — led by Quellcrist Falconer, who is part warrior, part philosopher.

Quell teaches Kovacs many lessons that he uses in present day, such as how to withstand torture and how to use weapons. The flashback story line ends with the infamous Battle of Stronghold, where the Envoys are wiped out by the Protectorate. Kovacs is the only survivor (although we later learn Kovacs’s sister survives as well, unbeknownst to him).

I found myself at times more invested in these flashback scenes than the murder investigation in present day. I don’t think Altered Carbon would have been nearly as enjoyable if these flashbacks weren’t part of the story-telling device.

Not knowing much about Altered Carbon before watching it, I will say one thing I was not expecting: that the show would remind me of one of my other favorite television series, Lost. The similarities are minor, but there were enough to make me smile.

The most obvious example is the use of flashbacks. The flashbacks did not focus on different characters each time, like in Lost, but they were used to fill in missing pieces to the present-day story.

In these flashbacks, the group of Envoys appear to be living and training in an area that reminded me of Lost‘s island. It was mostly jungle, and even featured a large cave where the Envoys lived, similar to the caves in the first season of Lost. At one point I thought Quell was going to give a speech about surviving together or dying alone.

When we are shown scenes of Kovacs’s childhood, we see his father is abusive and an all-around terrible human being. This was an extremely common theme in the Lost flashbacks — you’d have a hard time coming up with which character had the worst father (although it’s probably Locke, right?).

But when the Lost connection really clicked for me was in a scene with Kovacs and Quell playing a game with black and white stones — strikingly similar to the game Jacob and the Man in Black played in Lost. I half-wonder if this was an intentional call-out, or if it was simply a coincidence.

Finally, Kovacs has some mysterious, unexplained tattoos — that brought back bad memories of Jack’s tattoos. Thankfully there’s no Altered Carbon episode devoted to explaining the origin of the tattoos.

Netflix has not yet announced whether Altered Carbon will return for a second season, but I hope it does. With the murder investigation of Laurens Bancroft wrapped up, the show could go in many different directions.

The first season ends with Kovacs hinting he would be turning in his sleeve. So would a second season have a new actor playing Kovacs? I think it would be likely. Joel Kinnaman is reportedly reuniting with The Killing co-star Mireille Enos for a show on Amazon called Hanna.

I would still watch a second season of Altered Carbon. The show may not be the best-written show I’ve ever seen (a favorite eye-rolling line was “Do you realize how much money you just cost me??” after Ortega had destroyed a number of an enemy’s expensive clones), but its amazing visuals, whirlwind action scenes, and likeable characters make it an exhilarating viewing experience.

One question I have going forward, however: If all characters can never die (unless they are purposefully or conveniently shot through the back of the neck), does that take away some of the drama after a while? What consequences are on the line? This may need to be addressed for the show to last going forward.

There are an overwhelming number of good TV shows out right now. It’s hard to keep up with them all. But I think Altered Carbon is worth your time.